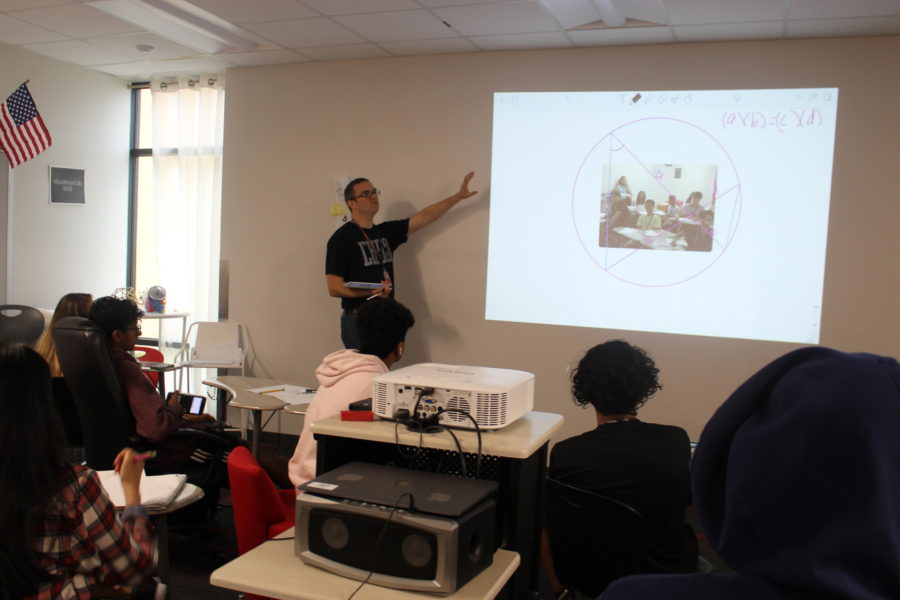 On Thursday, CHS9 geometry teacher James Behlen engages his students by using their pictures in his geometric proofs lesson. Behlen previously taught geometry at Coppell High School before transferring to CHS9 for the 2018-2019 school year.

An uncle, two brothers and others in his extended family were jailed or died because of drug addiction.

Heroin and cocaine had been killers of his kin. He watched as family members drifted in and out of jail.

With struggles breathing down his neck, CHS9 math teacher James Behlen made a choice to make a change. He decided to never allow addiction, both alcohol and drug-related, to contaminate his life like his family members.

“I have never drank alcohol, and I have never tried drugs after seeing the devastation they can cause,” Behlen said.

After making this life-changing decision, Behlen was inspired to make sure his students never took the path some of his family members had.

“That’s my number one goal [to have a positive impact on students outside of the academic environment],” Behlen said. “I teach them content, but I also want my students to come out of my class feeling empowered to make better choices.”

One of the lessons Behlen attempts to instill in his students throughout the year is people must solidify their principles before being put into situations of temptation.

“Being a teenager is extremely hard; if you don’t want to be someone who gets drunk or uses drugs, that’s a decision you have to make before you go to a party,” Behlen said. “Once you’re in front of all your friends and being pressured to drink or smoke marijuana, you’re much more likely to do it if you haven’t already decided ‘that’s not who I am’.”

Behlen normally gives his talks before school breaks and throughout Red Ribbon Week, where students are informed of the dangers of addiction. Though Behlen has not yet spoken publicly or addressed the school, his students are well aware of his warnings against drug abuse. Many former students have said these talks made a big impact on their lives.

“Mr. Behlen’s talks made me realize how big of a problem addiction can be,” said CHS junior Rayne Whitney, a former student. “It made me not even want to feel the temptation of trying anything.”

Through anecdotes, Behlen makes clear to students addiction can plague anyone.

“Whenever you hear about drug abuse, it seems distant,” CHS sophomore Ella Jenkins said. “It doesn’t normally sound like it could happen to you, but all the stories he would tell us made [us] realize how big and close of a problem addiction is.”

Though many of the talks Behlen gives his geometry classes consist of warnings against addiction, Behlen also tries to teach his students other important life lessons – ones not only about drugs, but about how happiness is a choice.

“My brother-in-law was killed in an accident last year and that was really hard on me,” Behlen said. “That gave me a chance to talk to my students about happiness and about how I could continue to cry about it in a corner all day. But at some point, you do have to find a way to overcome these things.”

Behlen emphasizes that the outcome of a day can be be defined by the perspective one chooses to have since the morning.

“You have to decide ‘am I going to make today a good day with good choices, or am I going to feel sorry about myself and make others feel bad for me,’” Behlen said.