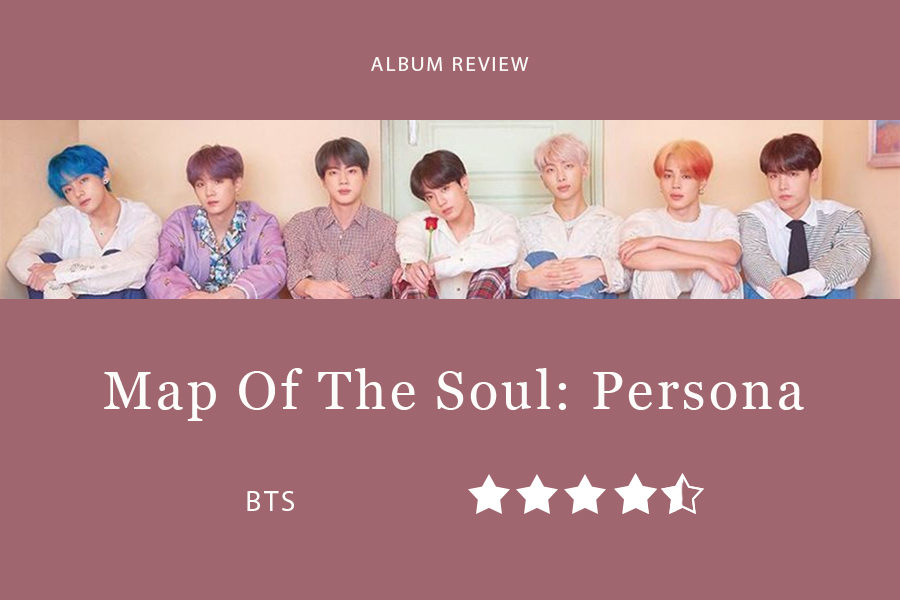 BTS’s Map of the Soul: Persona was released April 12. The album includes collaboration with Halsey, “Boy with Luv”, which holds the record for YouTube music video with most views gained within 24 hours.

Over the years, the Korean group BTS has established a brand of comfort. Lyrically, its songs preach self-love, condemn the negatives of society, relate personal experiences of struggle and offer a hand to those in need.

BTS’s latest release is no different. Map of the Soul: Persona presents a new side to the multifaceted BTS, but is still just as well-crafted and warm as its previous albums.

One of the most noticeable aspects of the album is how sonically cohesive it is. Unlike previous releases that spotlight the members’ versatility in production, this album generally sticks to a softer sound. It is an easy listen, not demanding much of the listener.

The tracks do gradually get simpler, but they still almost all feel unified, while sticking to a general vibe. Similar elements – background echos, ad libs, popping synths, mellow guitar riffs – jumps from song to song so it is always obvious you are listening to one album.

That is not to say the group has abandoned experimentation for sonic cohesion – it has managed to preserve both. Certain tracks are nothing like BTS has ever created. Track 3, “Mikrokosmos”, presents a danceable pop rock beat never used before by the group. Yet its lyrics are a BTS staple, celebrating the light inside every person. In the background, synths reminiscent of twinkling lights reinforce the poignant message.

Take “Jamais Vu”, titled after the phenomenon wherein a known situation feels new and unfamiliar. The track exudes a haunting vibe, largely due to a tonal change right before the chorus. It is unexpected in the best ways, and the perfect complement to the minimalistic beat and emotion in members Jin, Jungkook and J-Hope’s voices.

Perhaps the boldest instance of experimentation is “Dionysus”, named after the Greek god of wine. The fusion of hip hop and hard rock matched with creative lyrics that compare passion for making music to drunkenness. Yet vocal ability is not sacrificed, harmonizations and ad libs giving dimension to the song.

Unfortunately, this song is the weak point of the album. It stands out awkwardly in a collection of softer tracks, like a last minute addition originally not intended to be part of the album. After a calming, emotional journey, “Dionysus” is an unwelcome jolt difficult to digest.

However, the album presents few other drawbacks. In parts, it seems as though raps do not quite match, such as Suga’s verse in “Boy with Luv” or J-Hope’s second verse in “Jamais Vu”. It feels forced, which is uncommon in BTS songs. The members are masters of hip hop – so why does it ever feel otherwise?

But when considering the album, these seem minuscule, barely detectable in a sea of careful decisions and artful choices. Overall, the album is a success, proving BTS can dabble in the new and unexpected without sacrificing the essence of what makes the group special. If it can carry over the secret recipe from this album into the future, success will surely be guaranteed.