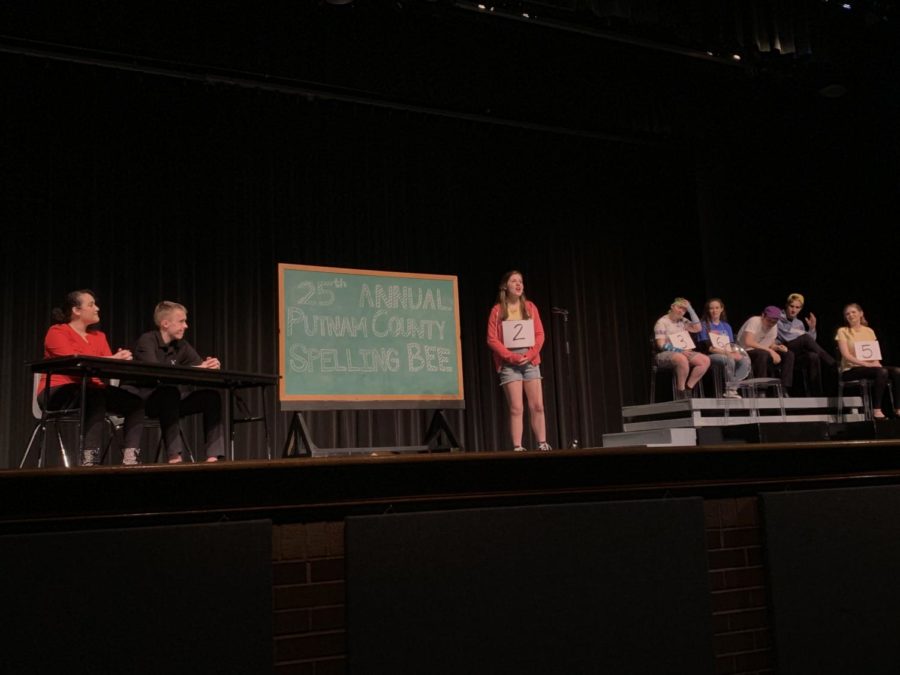 Eight members of the cast perform “My Friend, The Dictionary” from the musical “The 25th Annual Putnam County Spelling Bee” during the Fame Show in the CHS auditorium last night. The Fame Show is a class show for Fame, the acting II class, taught by CHS theater teacher Karen Ruth, vocal coach Ben Brown and dance instructor Whitney Bollinger.

“Who’s ready for some musical theater?”

The cheering is affirmative as Coppell High School theater director Karen Ruth steps off the CHS auditorium stage after introducing the Fame! show Tuesday night. As the lights dim, the audience’s eyes are directed to screens on either side of the stage, introducing “La La Land”. Anticipation hung in the air as the spotlight zeroed in on CHS sophomore Matthew O’Quinn singing “City of Stars”.

“I really liked the theme,” CHS theater booster president Shelby McGill said. “You did not need the set at all. Everyone just got lost in the music.”

The mood shifts within songs are effortless, as are transitions between them. O’Quinn’s solo opener moves into dazzling, colorful numbers such as “Someone in the Crowd” and “Another Day of Sun”.

“It’s been hectic these last few weeks, trying to [perfect] songs and choreography and blocking,” New Tech @ Coppell sophomore James Goode said. “It’s been a hard process, but I feel like the end product is worth the effort we put into it.”

Short video clips recorded by other CHS thespians are projected onto the screens on either side of the stage to summarize each musical before its numbers are performed.

“Without proper context, it’s hard to understand songs.” New Tech @ Coppell sophomore Marc Hatanpaa said. “I’ve never seen a show where it’s a compilation of songs, so unlike a normal show where you have the story and plot, it’s cool to just jump to the next song.”

While the dancing is mesmerizing and the acting spot-on, the vocals stand out most.

“We have so many different types of singers,” Ruth said. “So we tried to showcase all those different kinds of people and utilize them where they fit best.”

In a duet from “Rent” called “Take Me or Leave Me”, sophomores Sydney de León and Isabella Enriquez have a heated argument about acceptance, enveloped in powerful vocals and cat-and-mouse choreography.

“[That] duet was by far my favorite,” McGill said. “The two were so in sync, you felt the moment; you were living that moment.”

The audience was captivated as performers staggered the stage to sing “Seasons of Love”. When they reached last couple notes and joined hands, attendees erupted in applause and standing ovations.

“I’ve always wanted to close a show with “Seasons of Love”,” director Karen Ruth said. “That musical means a lot to me. I love the sentiment of “Rent”. What better way to close a show than saying ‘hey, we love you and we support you no matter who you are’.”

The second and last show will be on Thursday at 7:30 pm in the CHS auditorium.