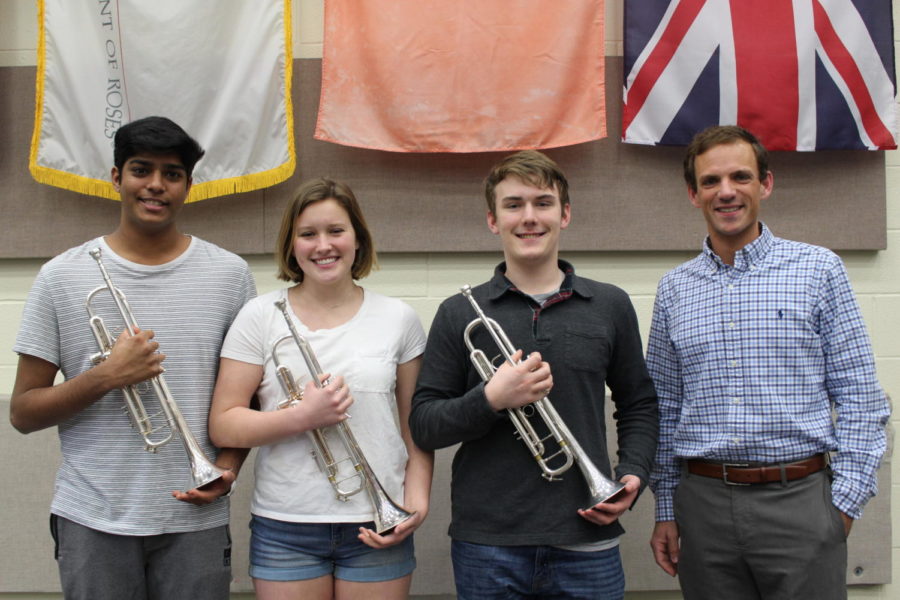 When the five high schoolers signed up to compete in the National Trumpet Competition, they did not expect to make history. They simply thought it would be a fun experience to play together.

The NTC is an annual competition for young American trumpet players. Before this year, only two solo divisions allowed younger students and high schoolers to compete. However, this year sparked change for both the competition and the local trumpet aficionados.

Before they played in the finals, Rauschenbach, Holmes, Haxel and Heard played together in the Greater Dallas Youth Orchestra. One posed the idea to perform together in an ensemble in the competition. Rauschenbach mentioned it to trumpet teacher Dr. Jared Hunt, who instantly loved the idea and offered to coach.

After approaching Pochampally to join, the five began to prepare.

“We all love playing trumpet and just love making music,” said Holmes, who won third place in the Solo Division. “So when you get five extremely talented individuals together, it’s just a great experience. Everyone’s dedicated, everyone practices, and the end result was just a really amazing piece.”

After passing the qualifiers in February, the five found themselves in Kentucky for the main competition. Rather than placing emphasis on the final round, they focused on the technicalities of their semifinals piece, hoping to place at least top three by passing this round.

As the ensemble played the ending notes of their finals piece, “Cityscapes” by Erik Morales, the crowd broke into thunderous applause. It was then that they knew their work had truly paid off.

“We didn’t really care if we won or not, because our performance was just amazing and electrifying,” Rauschenbach said. “It was so fun, and we could tell the crowd really liked it.”

However, behind the victory lies months of practice. Led by Hunt, the five went through six months of training, tweaking their preliminary round piece to be as perfect as possible. To accommodate for absentees, Hunt would substitute in to keep the piece sounding as complete as possible at all times.

“I don’t think we would have gotten anywhere near as far as we did without Dr. Hunt’s guidance and support,” Holmes said. “He’s really the glue that held our ensemble together and made it what it is.”

This was not Hunt’s first experience at NTC. Four years ago, his Coppell student Christopher Stubblefield placed first in the solo division.

“With both his musical and technical experience, we were really able to work well with him,” Pochampally said. “We’re really thankful to have him.”

Around the time of the competition, the group faced numerous complications, including bad weather, flight delay and shortened rehearsals. However, nothing could stand in the way of the ensemble and their first place plaque.

“We were musically mature enough to get past that setback,” Pochampally said. “We didn’t really see it as an obstacle that would inhibit our performance.”

In the future, Holmes, Rauschenbach, Haxel and Heard plan to pursue music as a career, Holmes double majoring with computer science. Pochampally plans to continue playing trumpet in his university orchestra. Later in college, the five may reunite to compete in collegiate divisions of the NTC.

“It was great to play with such great players with such high ambitions,”  Pochampally said. “Being a part of that was such a great experience.”