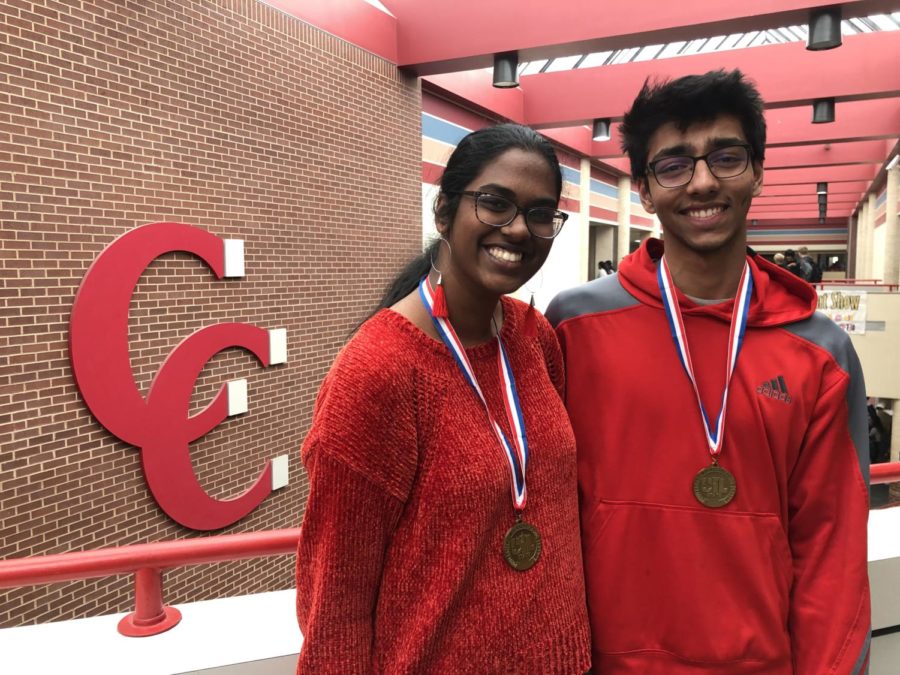 Coppell High School senior Jayashree Ganesan and junior Prayaag Gupta participated in the UIL Cross Examination Debate state meet at the University of Texas at Austin on March 23. Ganesan and Gupta reached the quarterfinals while debating whether the U.S. government should reduce its restrictions on legal immigration.

On March 23, two teams from Coppell High School participated in the UIL Cross Examination Debate state meet at the University of Texas at Austin.

These four individuals are members of policy debate – where one topic is studied throughout the year. This year, the question was whether the U.S. government should reduce its restrictions on legal immigration. Having to debate, and thus fully understand, both sides, the two teams spent copious amounts of time preparing for state.

“[Ganesan] and I met up at the library several times weekly leading up to the tournament,” Gupta said. “We prepared our affirmative argument and for potential arguments other teams might have against us. We researched and wrote blocks, which are scripted answers to arguments.”

Despite having attended local tournaments, UIL was a new experience for both teams and required special preparation.

“UIL is pretty traditional with their form of debate,” Arya said. “Normally we say a lot of arguments in a short amount of time because we have set speech times. But for UIL, they don’t like spreading, which is speaking really fast. We had to cut down our cases and speak at a slower, conversational speed. A lot of the judges also weren’t as informed on policy debate, so we had to make our arguments easier to understand.”

While focusing on one topic for a year may seem tedious at first glance, the complexity that comes from researching a single subject is what makes policy debate special to many debaters.

“Throughout this entire experience, I’ve learned so much about international and domestic policy on top of various forms of critical theories, which are things about race, culture and identity,” Arya said. “Policy debate is really interesting because you encounter these different types of arguments. Yes, there’s one topic for the year, but it really branches out into more than just immigration.”

For both teams, the debaters said natural chemistry and purposeful efforts at collaboration led to the success at state.

“[We] work well together for several reasons,” Gupta said. “One, she’s a year older than me, so I was able to learn from her experience. Also, she’s really good at the research part and I focus more on the presentation aspect, so we complement each other well.”

The numerous steps that go into successfully preparing for a debate tournament make policy debate competitive in a way that isn’t normally seen within high school.

CHS debate coach Dr. Jason Sykes sees the hard work and diligence his students put in and, in turn, the opportunities they gain from it.

“Policy debate offers students unequivocal learning opportunities they simply don’t get anywhere else on campus,” Dr. Sykes said. “It puts us up against the best competition across the globe, and in order to be successful in policy debate, we have to compete against the very best.”

What makes debate worth it for these students isn’t the medal hanging around their neck. To them, the knowledge and opportunities they gain are the ultimate prize.

“Thinking about next year and the opportunities to come makes all the hard work worth it,” Arya said. “I’ve learned so much from debate, more than from anything else in my entire life. Everything I’ve learned made the whole experience worth it.”