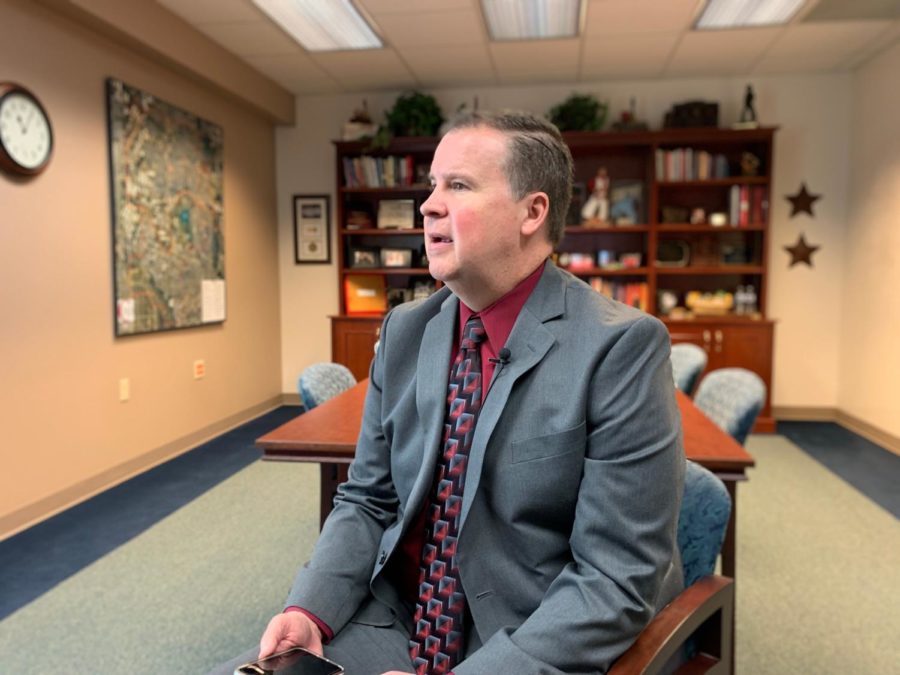 Coppell Student Media had the opportunity to sit down with Coppell ISD Superintendent Brad Hunt in an interview discussing various district topics, including campus renovation, district policy, new campuses and student drug use – all of which have been at the forefront of the 2018-19 school year.

CSM: What is the district’s plan regarding personal devices for the upcoming school year?

HUNT:  Right now, we’re not looking at changing anything as far as iPads at Coppell High School and CHS9 and Macbooks at [New Tech High @ Coppell]. That’s still our plan for the next school year. If there’s something more significant after that, that’s where this technology committee is coming in to give us more feedback, because we do recognize the value of those devices. But we also don’t want to spend money if kids might not utilize them to the fullest extent. So we’re still a little unsure as far as those final recommendations. I haven’t been briefed of those yet. But that is something we have been discussing. So hopefully, by May, we will have more definitive responses.

CSM: As we approach the end of the year, what has worked well with CHS9, and what has not?

HUNT: I’m very excited about the opening of that ninth grade campus. For high school students, they have two great options: they can either go to New Tech as a ninth grader, or they could go to see CHS9. At CHS9 [we can] meet ninth grade needs at a separate location. They still can participate at many things at CHS, but they also have their own experiences at CHS9. It’s been exciting for them to mature and grow and really find out who they are as individuals before they move on. Some may decide to go to New Tech, but the majority go to Coppell High School. [Students have] been able to experience CHS at a smaller scale. CHS9 helped with overcrowding issues, which has been great. You can see that [at CHS] right away that with almost 1,000 less kids in the hallways, lunchroom, student parking lot and classrooms. [CHS9] really hit all of our goals and objectives. We had some growing pains in the first part of the year with just the bus situation and transportation. One of the main roads going into CHS9 is Freeport Parkway, and it’s been under construction all year long and still looks like it’s going to be under construction. So that presented some unique challenges. We’ve been working through some of those early kinks. We didn’t have the cafeteria ready the first three days of school, so we had to bring food in, but we made it work. Our kids are great and very resilient. The teachers are very flexible. But now, we’ve really been able to stand more firmly on our own two feet. It’s been a great opening and addition to the CHS and CISD family.

CSM: As a district continuing to grow, what is the plan for increased enrollment and overcrowding issues?

HUNT: Obviously, we have a lot of student growth at all levels K – 12th grade, even the pre-kindergarten program. And we want to make sure we have adequate space for everyone. We have a new elementary school opening [this fall], Canyon Ranch Elementary. [I’m] very excited about that new school opening; it will help us decrease enrollment at our elementary campuses next school year. We added Coppell Middle School West with the larger location and bigger design, so that hopefully will help as far as long term planning with middle school. Then, opening CHS9 helped us with overcrowding issues at CHS. So we’re hopeful that will take us for a while. We will be putting together a facilities committee that will plan next year and look at the future. But for right now, we should be able to accommodate all the growth we have with the current structures that we have with our buildings.

CSM: What major renovations can students and staff expect next year?

HUNT: Hopefully you’ve seen some of those already with the new restrooms and some of the new paint. You’ve seen some cosmetic improvements to CHS, which we’re very proud of. There’s even been some updates to water fountains. Now you’re going to see bigger changes that are on the way. [CHS Principal Dr. Nicole Jund] had some students who were a part of a design charrette, where they were able to give some input on what they would like to see as far as improvements. We’ve seen improvements, as we’ve mentioned already with athletics and its facilities. We’ve seen minor improvements and other areas like the library and fine arts. You’re going to see even more in those areas, especially in the academic area and the common areas. The new kitchen was added in the serving spaces a few years ago at CHS, so to be able to have this next iteration of improvements is going to make CHS look even better than it already does.

CSM: How is the district addressing academic dishonesty on campus?

The cheating issue in general opens up all kinds of questions as far as responsibility and everybody’s role played. If I’m a teacher, and I’m still using the same test I’ve been using for the past five or six years, that might be an issue, because people are going to, most likely, share some information with others. Ultimately, as an educator, as a teacher, I have to take some responsibility in that too as far as active monitoring. How am I making sure kids are taking the test and not cheating with one another, and paying attention to what’s going on in the classroom? Or am I on email or stepping out? We’ve got great teachers who take this very seriously and are working on a committee of academic dishonesty who feels strongly about this topic. But I also know that every teacher can only take responsibility for their own classroom. It’s up to all of us to make sure we do what we can do to help our kids be successful.

Ultimately, it’s a student makes the decision: am I going to cheat on this test or not? Am I going to share an answer with someone or do my own work? Am I going to give somebody copy of a test I know I shouldn’t, [or even try selling it to them]? Students play a big part in this and a majority of the responsibility lies on the shoulders of the students. They’re also as a parent part of this as well, because this partnership isn’t just teacher-student, parents are part of it too. What are we teaching our kids at home? How are we monitoring our kids work? How are we looking at our kids devices to make certain they’re not doing things they should be doing? It’s a joint problem. But everybody has to take responsibility and do what we can to correct this problem, because it is an issue.

CSM: How is the district addressing usage of illegal substances by students?

HUNT: Well, you know, we recently had a couple of guest speakers come in and talk about the dangers of vaping, and more specifically, dangers with more involved drugs, like hydrocodone and oxycontin, and some of those that would lead to heroin, addiction and overdose. We’ve unfortunately lost several students over the past few years, whether they were currently in high school or had already graduated. Drug abuse and use and that led to untimely deaths, which is a horrible, horrible thing. As a community, we’ve had to deal with that more often than we should. As a district, we recognize we have issues with drug and alcohol abuse, so we have to take action to resolve that.

This is a Shattered Dreams school year, so we always try to beef up our assemblies and programs that deal with alcohol use and abuse. But alongside that, are issues with vaping, legal drug use and even prescription drug use. We brought in several speakers and parent resources. We’ve got great school resource officers here to help us. Our students [and] staff services really do a lot with our Parent University, which is educating parents, but also trying to do more with educating kids.

It’s important for kids to know the full story, and sometimes there’s a lot of misinformation out there, so we want to make sure they’re getting the correct information. We also don’t want to ever just put our heads in the sand and say, ‘Oh, this is Coppell. This is a community that doesn’t have any problems. We’re a problem-free area.’ Well, great kids can fall victim to drug use and abuse. We’ve got to acknowledge we have had issues with that as a community. It’s our job as school leaders to make sure that our kids are well aware of what’s going on, that our kids understand the dangers. We’ve got anonymous tip lines, Crime Stoppers, all kinds of resources in place to try to help our kids stay safe. We talked a lot about school safety, which has always been a hot topic. People think school safety is just violence and dealing with that kind of issue, but it’s also drugs and alcohol, too. Our kids want to go to a safe school. Our kids want to go to school where they’re not dealing with somebody vaping in class, or doing drugs in the bathroom or selling drugs in the hallway. So we want to make sure our schools are safe and part of that is education, awareness and being stricter on consequences. You know, if kids are caught with drugs and alcohol at school, those consequences are pretty significant. We want to make sure students are following the student code of conduct and they know what’s in [it]. But more importantly, we’re giving them some tips and tools to help them not even go down that route to begin with.