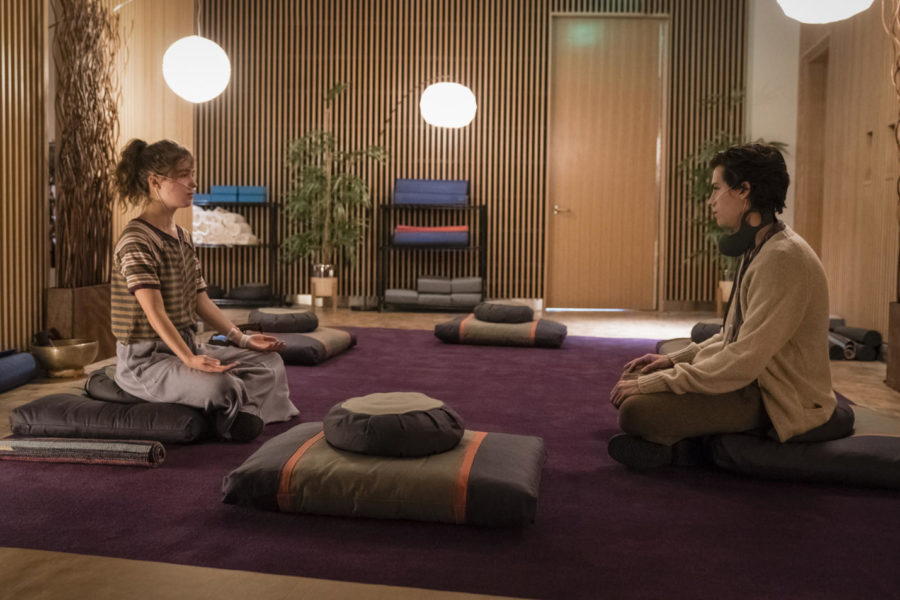 Stella Grant (played by Haley Lu Richardson) and Will Newman (Cole Sprouse) do breathing exercises and meditation together in Five Feet Apart, released March 15. Five Feet Apart follows two teens who share a romantic bond, but cannot touch each other due to the nature of cystic fibrosis, a disorder they both have.

Due to romance constantly being associated with physical contact, the love in Five Feet Apart, released March 15, feels refreshingly pure because the two protagonists are prohibited from touching each other.

The story follows Stella Grant (played by Haley Lu Richardson) and Will Newman (Cole Sprouse), two teenagers living at a hospital with the rare disease cystic fibrosis (CF). While Grant is obsessed with following her treatments, Newman has already given up, and completely ignores his medical regimen. His apathy agitates Grant, so she begins forcing him to do treatments with her; soon, their friendly bond develops into a romantic one.

But the two must remain six feet apart at all times to prevent themselves from catching each others’ diseases.

The movie’s opening shots are its most beautiful – a montage of uniquely-filmed, natural footage representing the importance of human touch, with voiceover of Grant describing how lack of touch left a hole in her heart.

Because it takes place over a short time period, some complain the film’s romance was too fast-paced and fake, but I believe it was written well. The filled each others’ holes –  Grant teaches Newman to have hope; Newman teaches Grant she should do her treatments to live, instead of living to do her treatments. They force each other to see the missing parts of themselves, to grow.

Yes, in real life their relationship would probably take longer to develop; but films are not meant to replicate life identically. They are meant to reflect the emotion we experience through life. And that emotion is undeniably there – heightened to the max when Grant’s best friend, Poe (Moises Arias) dies from CF, making her cry,  “He was my best friend, and I never hugged him.”

Although this film has its fair share of cliches, Grant’s character is dynamic and powerful. On the surface, she seems to be obsessed with her medical treatments simply because she’s an optimist who wants to live; while that’s true, it is later revealed she suffers from immense survivor’s guilt ever since her sister’s death, which adds a layer of complexity to her persona. Newman, on the other hand, is somewhat stereotypical. But he is endearing nevertheless, and the balance he brings to Grant makes him valuable to the story.

The film creators integrate a perfect soundtrack to complement the story – creating a somber, wistful, bittersweet final product that is simultaneously inspiring. Whenever I listen to “Up, Up & Away” by Chance Peña and “Don’t Give Up On Me” by Andy Grammer, I’m filled with the same emotion Five Feet Apart gave me.

The movie also sheds light on a very underrepresented group, as only about 70,000 people worldwide have cystic fibrosis. While there are inconsistencies between the actual disorder and its Hollywood version, the film creators are determined to represent the CF community as vibrantly as possible.

Director Justin Baldoni was inspired to create Five Feet Apart by his late friend Claire Wineland, who suffered from CF; in 2017, he premiered the documentary series My Last Days, which follows victims of terminal illnesses. Some accused Five Feet Apart of milking the sick-teenagers-in-love plotline – perhaps solely for money- but in reality, Baldoni is genuinely passionate about the topic and has been thinking about the film’s premise for years.

Partway through the film, Grant and Newman decide to break the six-foot rule slightly by reducing that distance to five feet, hence the name Five Feet Apart.

“After all that CF has stolen from me, I don’t mind stealing something back,” Grant says, laughing. “One foot.”

While the idea is interesting for a story, “stealing” a foot back should not be romanticized the way it is, because CF patients could put themselves in extreme danger by trying that in real life.

But the film’s beautifully tragic ending makes up for it. After seeing Grant nearly die in front of his own eyes, Newman ends up walking out of her life, finally realizing the importance of letting go. It is a relief to know the film doesn’t glorify their dangerous romance by showing them together in the end despite the risk.

Although Five Feet Apart is not completely original, its unique aspects are a breath of fresh air, and you will most likely leave the theater with tears in your eyes.