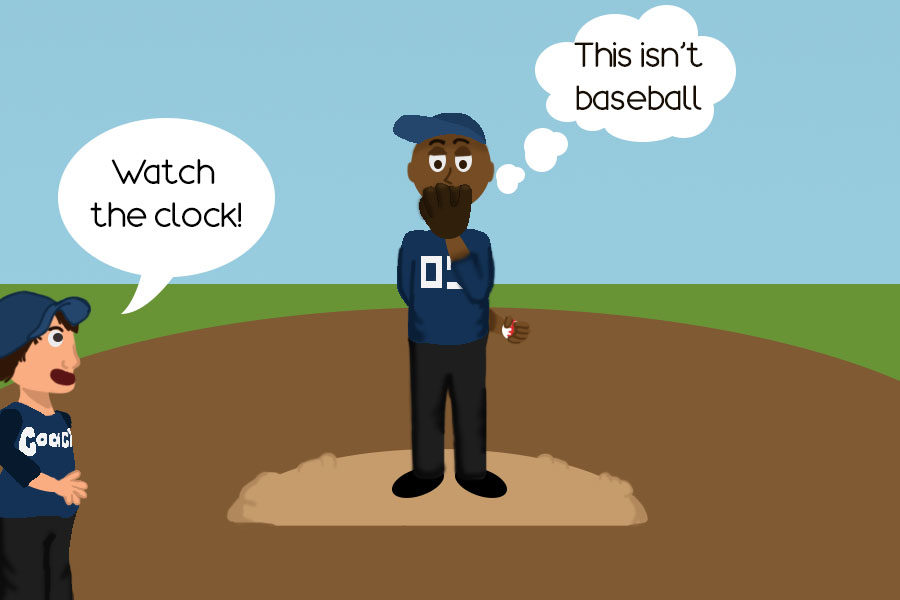 Baseball is known for being the American pastime, but in recent years the popularity of the sport has been dropping. To regain viewing, Major League Baseball wants to implement the use of timers to shorten the game. According to The Sidekick co-student life editor Sally Parampottil, this new rule is detrimental to the sport.

There was a time in my life when I adored watching baseball. In elementary school, I would watch the Texas Rangers play in the afternoon with my dad, and even though I did not care about stats or rankings, the game itself was fascinating.

As I grew up, I no longer had time to watch a full game.

Over the past few years, the average length of a baseball game has increased. What used to be less than two hours in the 1920s transformed into an averaged three-hour spectacle. Many believe this to be one of the major reasons why baseball’s popularity has been declining the past few years.

“At the big league level [average game lengths] have gone up,” Coppell baseball coach Kendall Clark said. “That’s because the pitchers don’t throw the baseball very often. They get it and stomp around the mound, and there is just a lot of time in between pitches.”

Major League Baseball  is taking measures to reduce the length of games, including testing a 20-second pitch clock in Spring Training. While it is great efforts are being made to fix common complaints, the truth is, there is not anything it can actually fix.

Baseball’s length is something that cannot be altered without altering the fundamentals of the game itself.

High school baseball, which is only seven innings and can be won in five innings due to the mercy rule, has a shorter average length than in the MLB. Coppell High School’s baseball team has not suffered a lack of participation, according to Clark, and changes in the MLB will likely not trickle down to the high school level.

Still, some CHS pitchers are not fans of the proposed changes.

Not only does the clock pose a threat to pitchers and baseball tradition, but it also will not fix the problem in the long run.

Even if the MLB took every opportunity and made every change possible to speed up the pace of play, what would they actually fix? The game might be shorter, sure, maybe by 10 minutes or a half hour if they really push it, but that will not fix the issue itself.

Each team in the MLB plays a game for the majority of days in the week. This happens every week until late September.

Baseball games are not like football games, which happen once a week and are peppered with time outs, injuries, reviewed calls and a million commercials in between. Apart from breaks every half inning and changes in pitchers, baseball is relatively continuous. While the pace of play causes that continuity to be extended, the truth is, even if the pace of play was faster, there would still be far too much baseball for people with their busy schedules to take the time to watch.

That is not a problem the MLB can fix.

Instead, audiences need to realize having an abundance of baseball games is not something that pushes people away, but is simply an aspect of the sport that provides more opportunity to watch.

Baseball is played in a series of three or four games, meaning if someone wishes to watch a matchup between two specific teams, they have multiple chances to do that. Even if one cannot watch the entirety of a game, he/she can at least pop in for one or two innings. Rather than forsaking what used to be my favorite sport to watch due to my hectic schedule, I can spend the free time I have to watch half, maybe a full, inning of a Rangers game.

The length of baseball games cannot be regulated without removing positive aspects of the sport. People may be too busy see every baseball game or not have the time to even finish the games they start watching, but by tuning in during the minutes they have to spare, baseball can remain an important part of American culture.

America’s pastime may be declining in a nation where people have increasingly less time to pass, but if people realize watching baseball does not require a full commitment to every second of every game, it might just be saved.