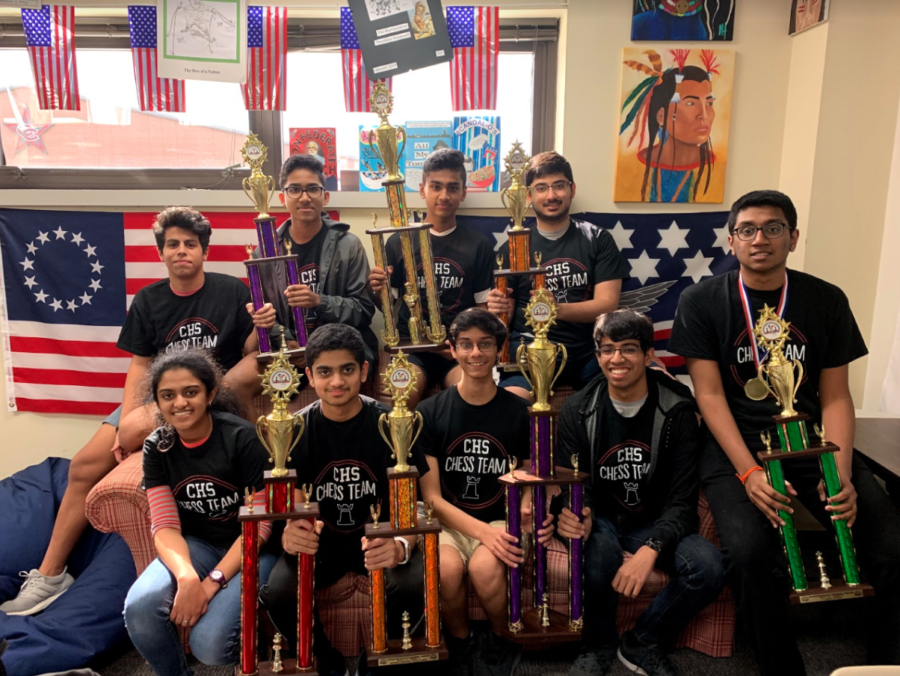 On March 8, the Coppell High School chess club competed in the annual Texas Scholastic Chess Championships in Houston for the first time. Two teams from CHS participated in HS Championship and HS JV Under 1000 and placed second and fifth, respectively.

The chess club members arrived at Houston Marriott Westchase at various times depending on their sections. The competition hosted 1,225 players from all over Texas.

“I felt a little bit overwhelmed with the sheer number of people, and my head was swimming with all the moves and thoughts,” sophomore Shreya Ravichandar said. “It was nerve wracking and honestly scary.”

Preparation for the tournament varied for each student. Ganesh, who is nationally-ranked 36 by the United States Chess Federation,  plays blitz games (online speed chess) and memorizes the opening (around the first 15 moves of the game). Ravichandar plays practice games, goes over tactics and looks at openings and famous games such as Byrne vs Fischer.

“When I practice, I really make sure I focus 100 percent so I can improve and get better,” Ravichandar said. “Sometimes I clear up to two hours a week to go over strategies and memorize certain tactics.”

Ravichandar’s first game was at noon. Afterwards, she went on to play six more rounds, of which she won three games and then requested a bye (half a point) to come to a total score of 3.5 points.

“I started playing, and I was surprised at how quickly I could regain focus on the game itself,” Ravichandar said. “It felt a little bit like the rest of the room was just background noise, just buzzing and not really as distracting as I thought it was going to be.”

Nagarajan and Premkumar, club co-presidents, founded the chess club last year out of their love of chess and desire for Coppell High School to win a school trophy – which could only happen by starting a club and recruiting members.

“The club first started off as a haven for five chess players to play with each other in order to improve and learn from each other while also having fun,” Premkumar said. “This year, we have been able to recruit a lot more new players into this field, and I hope we can keep expanding for the future to the point where people know of Coppell High School as a powerhouse in the chess ranks.”

“We welcome everyone in the club,” Nagarajan said. “By the end of last year, we had 10 members, and this year the club grew exponentially to around 30 members. The club is not only for competing though – only around 10 participated at the [state] meet – so most members just join to play chess for fun. ”