Dragon, eagle battle to form an identity through art 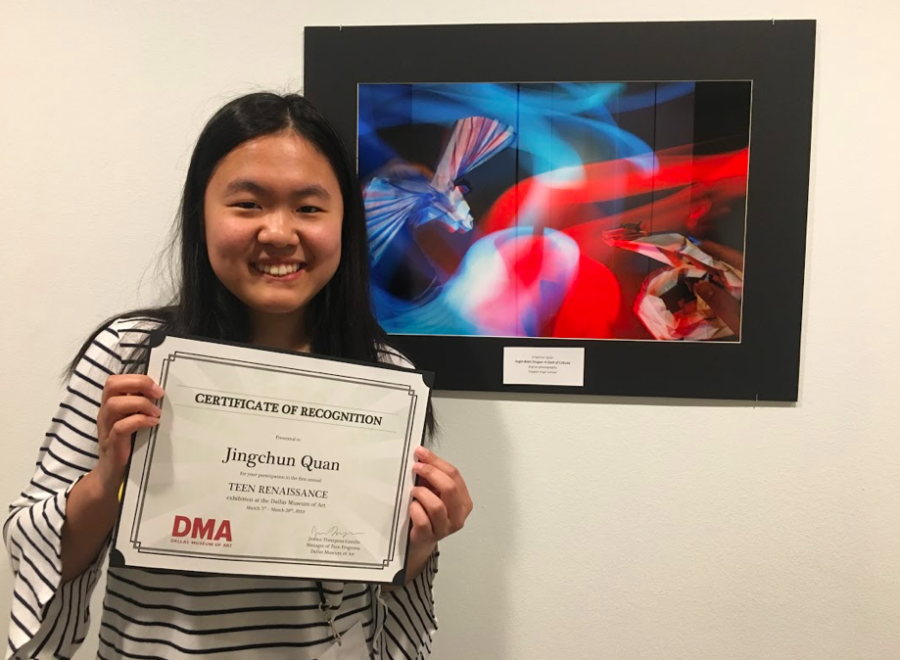 Art means something different to every person due to their own varying personal experiences; Coppell High School senior Jingchun Quan used her own background and experiences to create award-winning art. Quan took a digital photograph, titled “Eagles meets Dragon: A Clash of Cultures”, which was selected for the Teen Renaissance Exhibition at the Dallas Museum of Art.

The photograph uses an eagle and a dragon with the colors blue and red to represent the ongoing battle of being an immigrant and staying close to both cultures. The dragon has red light surrounding it, representing the imperial and oriental Chinese culture. The eagle has blue light surrounding it, symbolizing freedom.

“I made an origami dragon and an origami eagle,” Quan said. “Last year my concentration topic was about comparing and contrasting the Chinese culture versus the American culture. The two intermix to show how I have a Chinese aspect and an American aspect, and they blend to make who I am today.”

Quan has been involved in art throughout her life in different ways. As middle school approached and art classes went from being mandatory to being an elective, Quan found herself at a crossroads.

Ultimately, she ended up following her love for art because of the sense of freedom it provides.

“[In] academic classes, we’re always on the quest to find that one right answer,” Quan said. “But with art, there’s more freedom, and you really get to make a lot of decisions to see how best to depict an object.”

This is not the first time Quan’s work has been selected for the program. Last year, her artwork was showcased in the Dallas Museum of Art through the Young Masters program. This is just one of many awards she has won.

“It’s crazy to see [that] much passion in a person,” CHS senior Anita Nitto said. “You can see how much effort she puts into every single piece she does. It’s not only reflected in how she works, it’s also reflected in the outcome.”

“[Quan] thinks very analytically,” Hauske said. “She balances a lot, especially in the artwork that was chosen for Dallas. It’s showing basically how she assimilates and balances between being Chinese and American, and you see the conflict that she’s got.”

Although Quan does not want to pursue art as a career, she wants to continue it as a hobby and possibly minor in it during college.