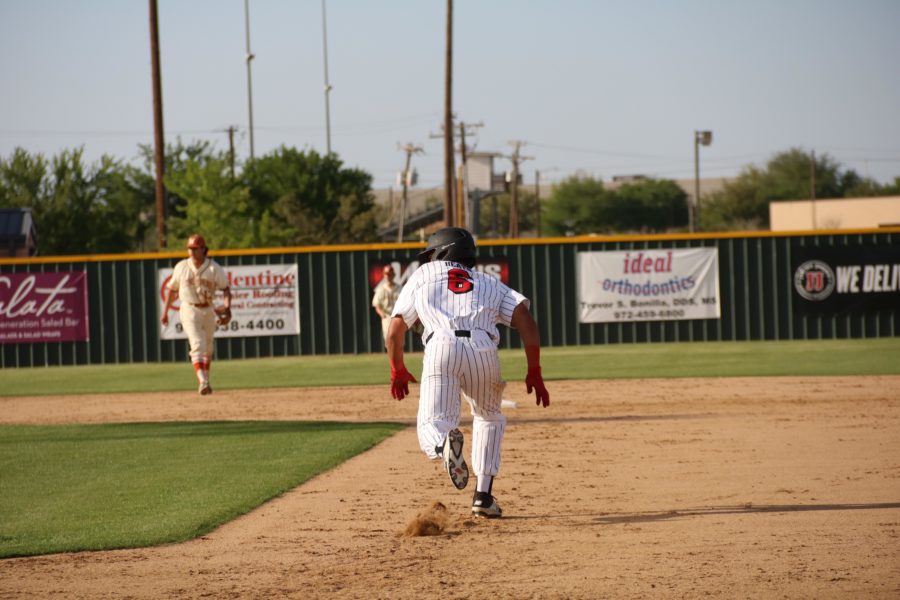 Coppell senior outfielder De Heath breaks for second on last season at Cowboy Field against WT White. The Cowboys will play the Hebron Hawks tonight at 7 p.m. at the CISD baseball/softball complex.

Tonight, the Coppell baseball team will play its third district game of the 2019 season against the Hebron Hawks.

Coppell (10-7, 1-1 in District 6-6A) has been heavily supported defensively by a seasoned pitching staff led by seniors Dylan Nichols, Porter Hardcastle and John Cashimere.

Although over one-third of the team consists of new varsity players, the Cowboys are hoping to approach their 30-6 record from the 2018 season, led by current LSU freshman pitcher, then Coppell ace Rye Gunter.

On Tuesday, the Cowboys lost to the Hawks, 1-0, at Hebron. Coppell coach Kendall Clark is optimistic about the outcome of tonight’s game.

“When you look up at the board at the end of the game and see an ending score like that, you know both sides played tough,” Clark said. “On Tuesday, we weren’t getting the bats going like we usually do, and we were leaving runners stranded and if we do that, we just can’t win.”

After hard efforts in practice and a new-found focus, the Cowboys are confident about adding another game to their win column tomorrow. The Cowboys and Hawks will show down for the second time at 7 p.m. at the Coppell ISD baseball/softball complex at S Belt Line Rd. and Wrangler Dr., adjacent to CHS9.