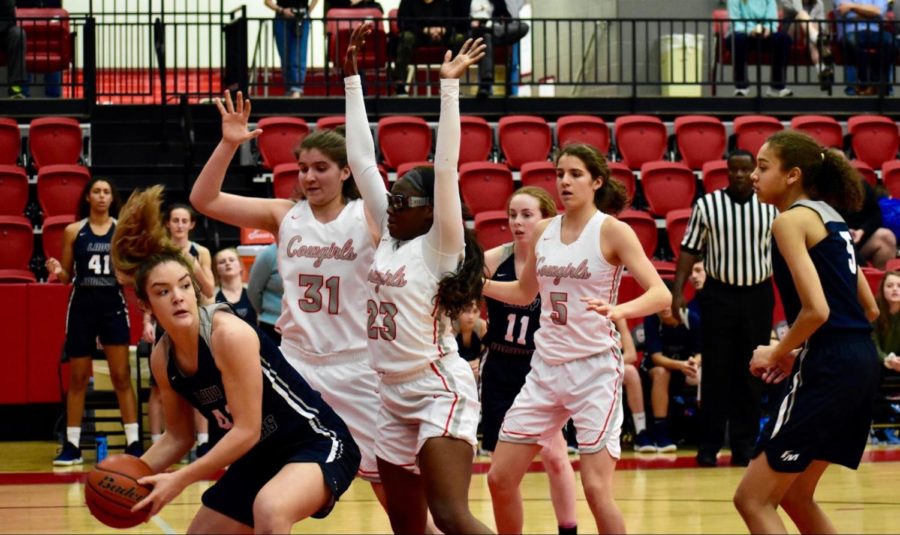 Four players from the Coppell girls basketball team, including senior forward Rowan Hassman (No. 31), junior center Nicole Obialo (No. 23), were named to the District 6-6A All-District first team. Coppell junior guards Jordan Nelson and Kennedi Rogers were named to the second team.

The Coppell girls basketball team ended the season on a high note, despite the doubts of a younger lineup. Four players received All-District 6-6A recognition performance throughout the season.

“It was a great way to end of my time playing for this team,” Hassman said. “Knowing I was one of the best in a very competitive district is a huge accomplishment and really sets the tone for the next group of athletes.”

This distinction is given for not only being one of the best players the team, but being able to lead. Coppell coach Kristen Davis understands the importance of having the ability to take control no matter the situation.

“All these girls are special,” Davis said. “We would be in difficult situations all throughout the year, and I could count on all four of them to help increase the morale and the competitive drive.”

“This year I decided he goal was not to win the award, but make it a better environment for my teammates,” Obialo said. “Having the chance to be one of the best in the district is a symbol for the amount of hard work we put in throughout the season.”

The award is also a statement for the next season, as it builds character and trust around the rest of the team.

“Getting a new group of teammates next year can be difficult because we are all on different levels,” Rogers said. “Using this year as a way to reach out to the rest of the team can be very beneficial for the upcoming season, especially because I know what it takes to achieve this honor.”

In the end, the distinction reflects the dedication for athletes as they come to a close in their journey as Cowgirls.

“This being my last season was a bit bittersweet because I know it would be my last time playing with my family,” Hassman said. “The award, in the end, proved everything I built up here at CHS from the time I started, to when I left the court.”