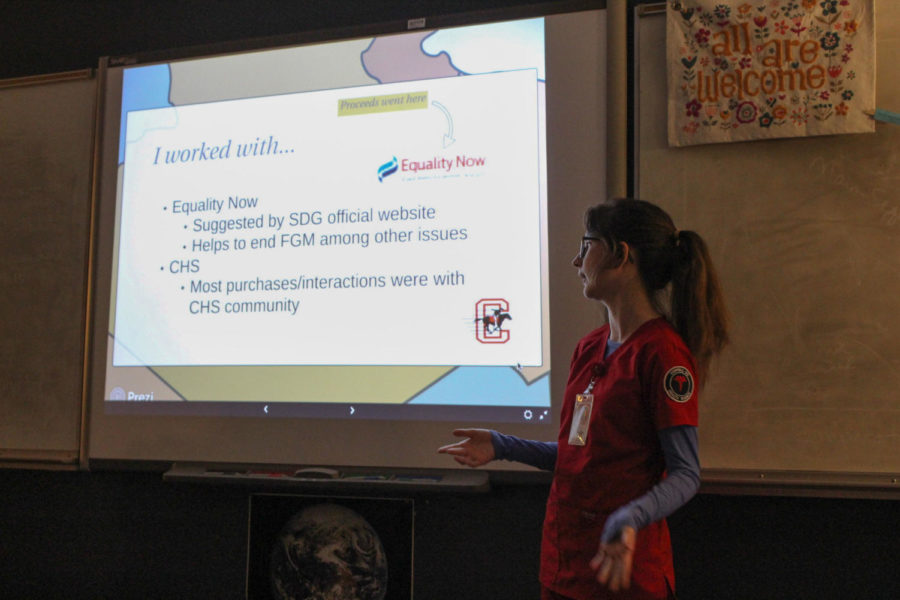 Very seldom is there a high school project that has an impact beyond the bricks of a school. For Coppell High School science teacher Angela Barnes’ classes, it is an annual event.

Barnes started the Sustainable Development Goals project in her Earth and Space Science/Astronomy classes to create a project that both invokes the interest of the students and makes a difference in the world.

“I really start with the question, ‘if there’s one thing in the world you could change, what would it be?’,” Barnes said. “They then look through the target goals and narrow their decision down to one.”

The Sustainable Development Goals are a list of 17 objectives set by the United Nations in order to better the state of the Earth – aiming to help problems such as hunger or health.

Each of Barnes’s students chooses a goal at the beginning of the year and research and develop their viewpoints on the topic as the year progresses.

Seniors Diego Lozano and Emma Lowery both chose Goal 16: Peace, Justice, Strong Institutions. In that, they chose the subset of the goal focused on ending abuse and exploitation.

“It gets more real as you research it,” Lowery said. “You never realized how much of a lack of participation there is from legislature and government officials.”

This is the exact reason Barnes started the project. Teaching Earth and Space Science and Astronomy, there are a lot of topics needing to be covered. Throughout the year, there are units students like and ones they dislike. The SDG project is a way to ensure the interest of the students.

The second semester of the year, students will either stay individual or pair up to develop a product or fundraiser to support the cause.

This is when it truly gets real for the student.

After spending months sitting behind the computer monitor – as many school projects require – students get to put their research into practice and actually raise money for a charity of their choice.

Lozano and Lowery’s selected charity is Futures Without Violence, a non-profit that strives to achieve just as the name suggests – decrease the amount of domestic abuse around the world.

“We are selling mostly brownies right now because they are popular, but we just sell them during our class and, with all the money we have right now, we’ll donate it,” Lozano said.

The pair has raised more than $200 thus far.

On the same note, the SDG project is not some shameless fundraiser for charity – it is a method through which students can learn useful life skills, such as cost-effectiveness and money management.

“I would say this is one of the projects that can teach you a lot of different things,” Lozano said. “Part of that is because we started it at the beginning of the year and grew our passion for it.”

As the year progresses, students not only raise their funds, but also increase their understanding of the topic.

“Sometimes you don’t realize how real it is out there,” Lowery said. “These are real problems happening in the world right now.”

Barnes’ classes presented their projects on Wednesday, but for many, that is not the end of their love for the topic.

“There is one student I had two years ago who still keeps up with her projects’ Instagram and Facebook page that advocated for gender equality,” Barnes said. “She really took the project on and ran with it.”

The Instagram page (@breaktheice2019) is still active today and gives testament to the true sustainability built into the project. While Barnes can encourage students to develop an interest in what they are studying, it makes the biggest impact when becoming internalized.

While the United Nations’s goal is to better the state of the whole world, there is still plenty to be said about people doing what they can to help the people in their community and give a helping hand.

Barnes and her students may not be able to end human trafficking, but they can always sell brownies to give what they can.