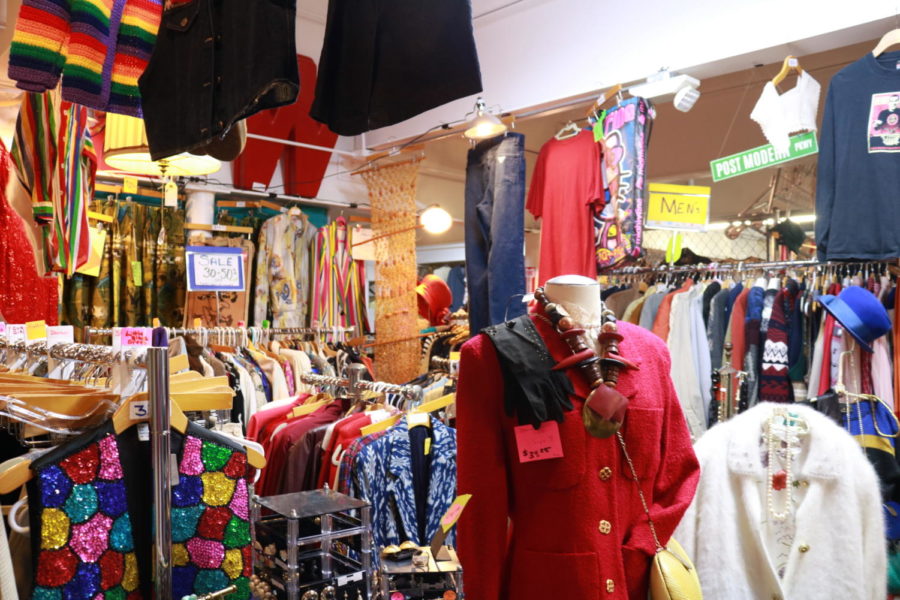 Lula B’s Oak Cliff Antique is one of the many thrift stores in the Metroplex, and is located 1982 Fort Worth Ave in Dallas. The popularity of thrifting has significantly increased over the past few years, with the environmental future of the world at the forefront of many minds.

Walking into a large thrift store packed with clothes, furniture and everything in between, it can take a long time for someone to find that perfect article of clothing; cheap, stylish and fitting.

For Coppell High School science teacher Rebecca Wheatley, the practice of thrifting started about six years ago, when her husband lost his job. Now, she uses it as a way to bond with her daughter, who enjoys finding unique pieces of clothing for cheap prices.

“[My daughter] is always so excited when she goes there because she finds stuff that other kids don’t wear,” Wheatley said.

For other students, such as CHS junior Anjali Satpathy, a lack of a job and a vintage driven style motivates her to spend an hour or two browsing through the racks of used clothing.

“I have no money, and thrifting is so much cheaper than department store prices,” Satpathy said.

The popularity of thrifting has significantly increased over the past few years, especially since the Great Recession in 2008. By 2022, the resale market is predicted to reach $41 billion, a significant change since 2017, when  it was $20 billion. This shows an annual growth of 15 percent, compared to the two percent annual growth the retail market is facing.

Just looking at the price tags, thrifting seems sensible, as buying used instead of new for one year saves $2,420.

Besides its cheap costs, the vintage styles of the 1980s and 1990s – high-waisted ‘mom’ jeans and chunky sneakers, to name a few – making a comeback has also accounted for the increase in resale, as it has sent many young fashionistas on a search for clothing the ladies of the ‘80s may have donated to the local Goodwill or Salvation Army.

“A lot of it has to do with a bunch of retro things coming back [such as] the ‘80s culture, with shows like ‘Stranger Things’ [causing] an ‘80s revival last year,” New Tech sophomore Isabella Enriquez said.

With the definition of trendy changing every season, many think the idea of finding vintage but trendy clothes for cheap prices may stop. Others think trends cannot change its accessible nature.

“[Thrifting] had its time last year, and it’s kind of dying down,” Enriquez said. “But I don’t think people will just stop doing it. Thrifting will always be a thing just because it’s a really accessible thing to do.”

An answer to this shift can be found in multiple areas, but especially in what is around us: the environment.

“I hope [the trend of thrifting] stays, it’s also recycling clothes instead of going into landfills or going into waste,” Wheatley said.

On average, Americans send 10.5 million tons of clothing to landfills every year, with millennials being the group most likely to throw away clothes after less than five uses.

With the environmental future of the world at the forefront of many minds, the effort to combat processes such as fast fashion, when inexpensive clothing is produced rapidly by mass-market retailers in response to the latest trends, has become more prevalent

Along with the ethical problems of the sweatshops that brands such as Forever 21 and Zara use, the fast fashion industry is the second largest polluter in the world, considering just a cotton T-shirt and a pair of jeans going through 5,000-7,000 gallons of water.

Yes, reusing clothes is cheap, trendy, economically and ethically savvy, but the resale industry is seeing an increase in something else: the prices themselves.

Thirteen  percent of people who shop at thrift stores are millionaires, signifying that not all who thrift need to thrift. With increased demand for products in thrift stores comes increased prices and increased scarcity in the amount of clothes. For lower classes reliant on thrift stores not for their retro style but for clothes they can afford, this is incredibly detrimental to their lifestyle.

“Thrifting was originally for low-income people who can’t afford department store clothing, so I do think, because of the trend that is blowing up right now, that many kids who want this type of style are buying out all of the clothing,” Satpathy said. “Lower-income people do not have as many clothes to choose from that they actually need, as opposed to people like me who go just for the style and low prices.”

However, a way to both thrift without contributing to an increased scarcity in clothing is donating clothes too, which also helps combat environmental waste of fashion.

“My favorite part of thrifting is the fact I donate all the clothes I don’t use, and that money helps the people who need it, and that’s important,” Wheatley said.

The practice of thrifting has caused many to question whether it has brought forth a time period of gentrification and privilege or a time period in which the environment is being changed for the better, one blouse at a time.

In short, the future of retail may be becoming resale.