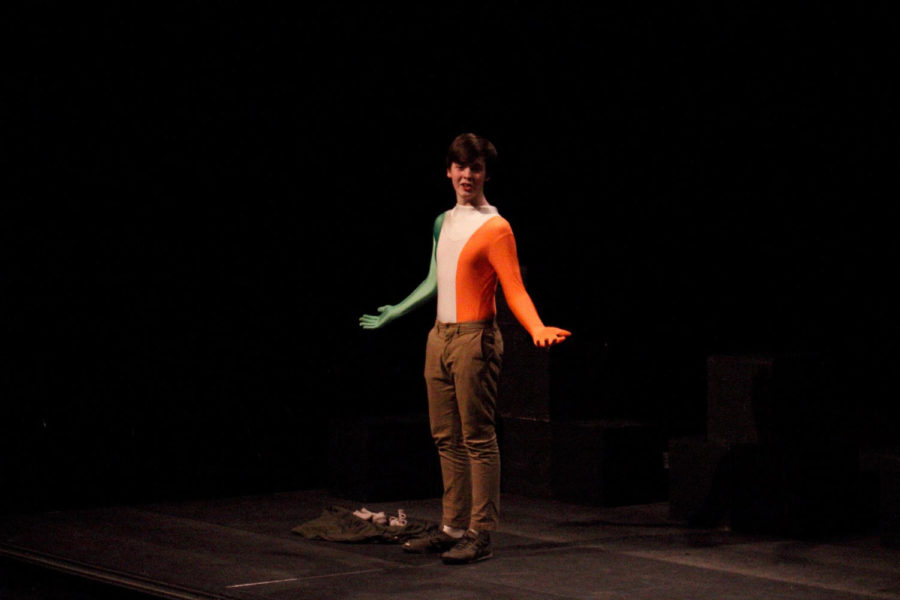 Coppell High School sophomore Alex McCord opens for relationships, a theatre led stand-up comedy and verbatim theater event at the CHS Black Box on Feb. 27. The theater students present themselves to the audience, making harsh and heartfelt jokes that pertain to themselves.

Relationships. Something many seldom think much about, yet the topic of choice for the Coppell High School Studio Premier showcase, #relationships.

Just off the heels of Valentine’s Day, the CHS theater students in advanced theater classes held a special night for students performances. The aim was to raise money for the upcoming International Thespian Festival, which nine students will be attending.

The show was split into two parts, each taken by a different period. Fourth period took on stand-up comedy and fifth period performed verbatim theater.

In verbatim theater, students interviewed friends, family and community members on a variety of questions about relationships. These topics ranged from first loves to heartbreaks to relationships with God. Afterwards, the students had to transcribe the recordings, filler words and “uhm”s included, and act out the scene exactly as it occurred.

As students stepped out onto the Black Box stage, their question projected on the wall behind them, they acted out the part, divulging the answers of the anonymous respondents. They did not hesitate to discuss touchy subjects such as mental health, toxic relationships and parental struggles, emotionally enacting the interviewees as they relayed each response.

“Since I interviewed friends and family, it was really interesting seeing aspects of them I didn’t get to know,” CHS junior CJ Konwe said. “You learn a lot of things you’ve never seen or known before about your friends and family.”

This serious portion was preceded by the stand-up comedy, 17 original bits by each actor. While not as obviously related to relationships, the bits poked fun at people and how we act. Some students joked around about pushy parents or overachieving siblings, while others talked about personal experiences and other generally humorous instances.

While it may seem easy, writing stand-up proved trickier than expected.

“We wanted something different and challenging,” CHS theater director Karen Ruth said. “I am a stand-up comedian, so I know how to do it, and it’s not an easy thing to do. So I thought it would be something challenging but fun they would like to do.”

Yet at the end, the challenge proved to be a learning experience for all students.

“Creating something that has a coherent flow to it is more challenging than one may think,” CHS senior Barrett Engler said. “I’ve developed quite an admiration for people that are really good at it and famous.”

At certain parts of the showcase, eight of the nine qualifiers (the final one being a tech specialist, not an actor) acted out portions of their respective skits. All three scenes varied in genre, yet required much skill from the actors.

Throughout the show, thunderous applause erupted from the audience, but none as excited as during intermission. During the 15 minute break, three of the students performed a quirky “performance art piece” titled Yogurt and a Triangle. Despite being unrelated to the show, it added a touch of boisterous laughter from the audience.

All proceeds from the event, including the $5 entrance fee and the concessions, go to fund the  competitors this summer. At the Thespian Festival, the nine will be competing, as well as attending immersive workshops and enjoying shows for a week in June in Lincoln, Neb.

“I’m excited,” Konwe said. “I’ve heard good things from the seniors. They’re not going this year so we’ve got to carry the weight and hopefully bring home something for Coppell.”