In his element: Newsroom captures heart of Sidekick adviser 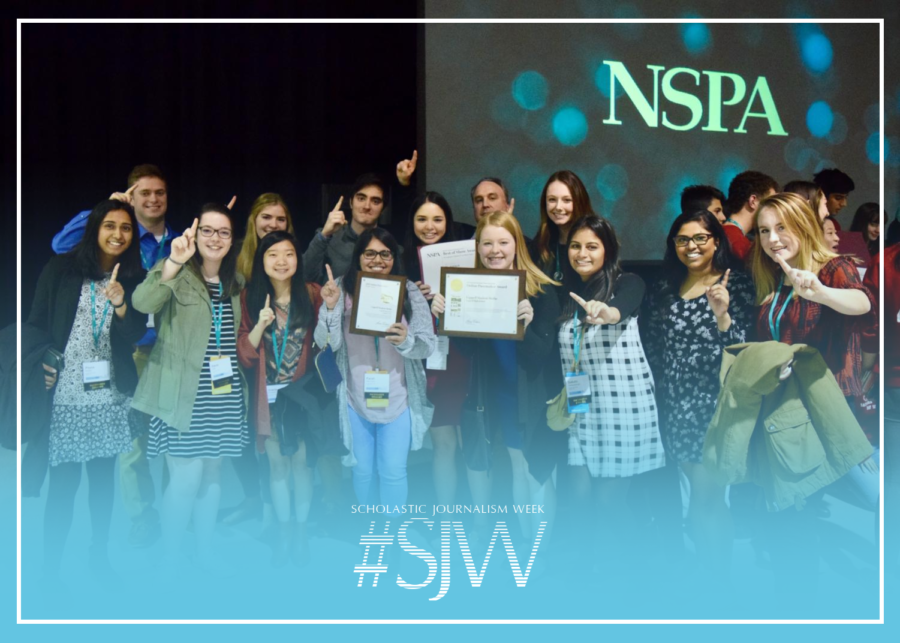 Members of the 2016-17 The Sidekick staff celebrate the first NSPA Online Pacemaker for Coppell Student Media at the Washington State Convention Center in Seattle. For 2019 Scholastic Journalism Week, The Sidekick adviser Chase Wofford appreciates how journalism has allowed him to experience such moments with special people.

Sophomore year at the University of Alabama could not have started better. I had made it through freshman year and finished first semester of my second year with great grades.

Then things changed second semester. My dad entered the hospital unexpectedly and died 30 days later. My positive college experience took a nosedive as I dealt with the loss of a man I had idolized my entire life. My mom, sister and I were devastated.

More than a year later, I was looking to get back on track both in life and the classroom as I prepared for my career beyond graduation. I was a journalism major so I thought I would explore summer internship opportunities.

I walked into the office of an outstanding man, UA College of Communications and Information Sciences job placement director Jim Oakley. Even though I had never taken one of his upper level classes, Oakley was there to help when my father died. He notified my professors, and they worked with me as I missed significant class time that semester. Oakley was a campus father figure to many.

Oakley asked how he could assist, and I said I was inquiring about summer internships. He asked to see my clips or writing samples.

The problem was, outside of my course work, I had not been published and did not have clips.

No worries, Oakley said, and he told me to walk next door to The Crimson White newsroom. I took his advice and the sports editor happened to be in the newsroom. The following afternoon, I was standing next to the same tower once occupied by Paul “Bear” Bryant on the practice field as the Crimson Tide football team went through spring drills.

I have been a part of a newspaper staff ever since. Before I had my wife and children, it was journalism that saved me and gave me purpose as I turned things around after losing my dad.

After graduating from Alabama in 1999, I returned home to work at the Arlington Morning News in the sports department, where our newsroom was loaded with talent, to say the least. So many of these writers and reporters taught me how journalism should be done and a majority of the principles found in The Sidekick the past 14 years come from what I learned in Arlington.

Later, I would work at papers in Frisco, Celina, Plano and The Dallas Morning News. However, I found my landing place in 2005 in a high school newsroom. Being named adviser for The Sidekick newspaper is the best thing ever to happen in my career.

Journalism is about people. The people next to you in your newsroom, grinding on deadline. The stories you tell. I will never forget interviewing a high school goalkeeper for a feature story about his prowess in goal, only to discover exactly one year before his father died from a brain aneurysm just feet away from where we were sitting. I was a young reporter, 23 years old, but this remains the toughest interview I have ever had.

Journalism is about emotion. I got in my car after the interview and wiped off a few tears as I then realized the honor I had to tell this young man’s story. This emotion becomes even bigger as a high school journalism adviser. There is no better feeling than seeing our Sidekick journalists write a great story, capture magical photographs or engage our audience with pages which come to life through their designs.

There is just something about journalism that creates a unique connection. Seeing former students land their dream job, get married, even have children of their own – it warms my heart.

And we all came together because of journalism.

Working alongside great advisers Irma Kennedy of KCBY-TV and Sallyanne Harris of the Round-Up yearbook would not have happened without journalism.

Journalism is about life. It is more than just news; it is about what connects us. It is about people’s success and their struggles. It is about holding those in power accountable and giving voice to the voiceless.

I am thankful for when journalism came into my life. I do not know where I would be today without it.