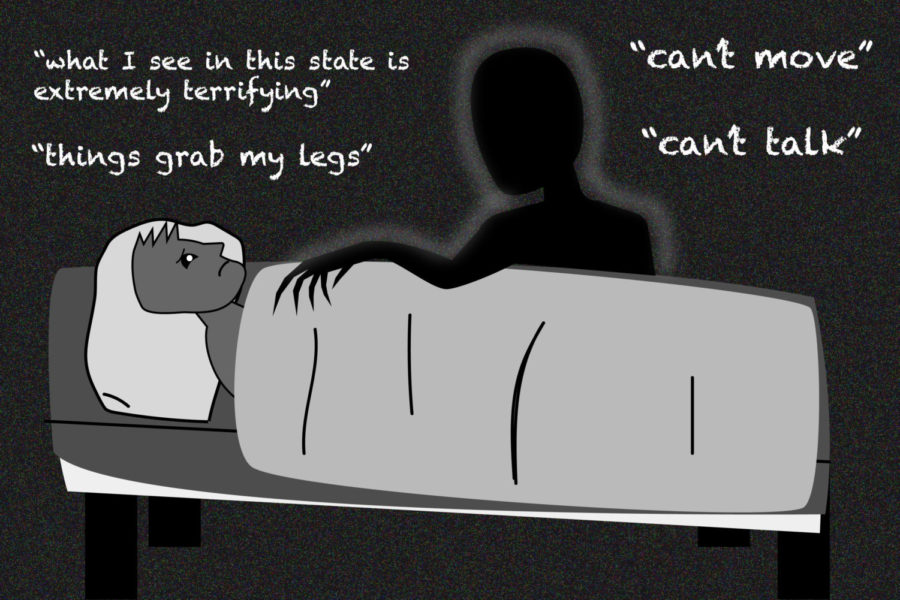 The night is young, and you are prepared for a full night’s worth of sleep. A few hours fly by until suddenly, your body is frozen like ice.

No matter how hard you try wake up, your body remains paralyzed to the core. If you have experienced these symptoms, you may have encountered sleep paralysis.

“Sleep paralysis happens during the rapid eye movement (REM) cycle. Essentially, your motor cortex is still activated but your brain stem, which contains parts that control your body, and it shuts down,” Coppell High School AP Psychology teacher Kristia Leyendecker said. “What is happening during sleep paralysis is that your muscles are relaxed and calm. There might be some twitching of the finger or eye, but for the most part, your body is paralyzed.”

Sleep paralysis is ordinary for those who are stressed, have irregular sleep patterns and are sleep-deprived. Recurring dreams and occasional nightmares are normal for an individual, however, sleep paralysis should not be taken as lightly as it is.

Those who experience sleep paralysis can have various experiences from others. For CHS junior Camden Restivo, sleep paralysis has become a part of his life, along with his lucid dreams that occur more often than they do for others.

“I have sleep paralysis about once a week or sometimes once every two weeks. I have had it since I was a kid and, it has been impacting me for my whole life,” Restivo said. “When it  happens to me, I become extremely lucid, and my mind wanders. It feels as if there’s a giant weight on my entire body except for my neck and head, which is the only part that I can really move.”

Many think sleep paralysis only happens to certain people, but in reality, anyone can experience it.

Sleep paralysis is not a disorder or disease, and it is more common amongst teenagers and young adults. Teenagers tend to experience it more during their high school years because of their fragmented sleep schedules and lack of sleep.

“It’s simply just a part of the overall process, and it can happen to anybody,” Leyendecker said. “It’s a biological process that you don’t necessarily have control over.”

Although there is no real way to completely stop sleep paralysis, research supports it is important to focus on the factors of healthy sleep: maintaining a balanced diet, getting normal amounts of sleep and regularly exercising to keep your energy level up. Incorporating these factors into your daily routine will get you one step closer to a healthy lifestyle with less interruptions along the way.

Accompanied by the inability to move or make a sound during the episode, hallucinations are a big component to what can make sleep paralysis such a scary experience.

“When my sleep paralysis began, I started to have small hallucinations which always made me think there was something watching me in my room,” CHS junior Rida Hamid said. “I used to be so scared, but now when I get it, I legitimately just lay there waiting for it to end.”

Leyendecker said those with lack of sleep are more prone to hallucinations.

“While in the paralysis state you feel very much awake, and it causes you to see things that aren’t really there,” Restivo said. “As for what I see in the state is extremely terrifying, including a tall, black figure which drags me off of my bed sometimes.”

Raising awareness about sleep paralysis is necessary to get down to the core of the issue, including discovering a way to cut down its symptoms as well as digging deeper into the underlying causes of the attacks.

Despite the fact that sleep paralysis is typically viewed as something to try to steer clear of, there is a slightly positive side to it.

“There isn’t really a way to stop it, and you shouldn’t want to because sleep is your body’s ability to recover,” Leyendecker said. “So, if you really think about it, during sleep paralysis your body is really able to just take some time to rejuvenate itself.”