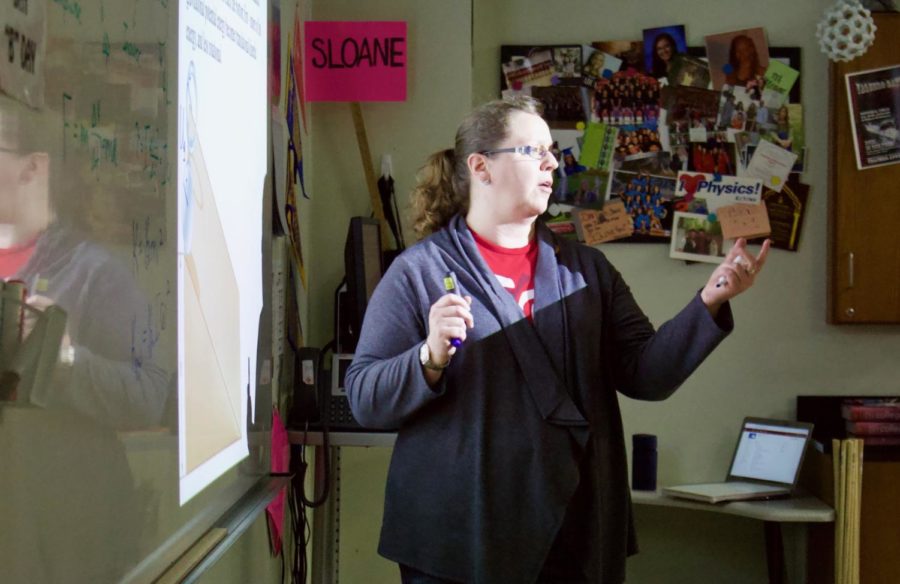 School and personal life. Two separate things, both which take dedication and time. However, Coppell High School AP/GT Physics teacher Stephanie Sloane takes her job a step further, applying physics to everything she does, including her interactive lessons, driving, and Marvel movies. This week, The Sidekick has chosen to spotlight Sloane as the Teacher of the Week.

How did you decide to teach physics?

Well, it kind of happened accidentally. [For] my very first job, I was teaching math, and I had one section of sixth grade science because I was at a very small school. I was coaching volleyball, and the head coach was pretty much the science teacher. We were talking, and she said, ‘They tried to get me to teach physics this year, and I told them no,’ and I said, ‘Really? Physics would be fun to teach.’ That was all I had to say and the next year I was teaching physics. So I taught physics there for 11 out of my 13 years there and really, really enjoyed it. So after that, no matter where I go, that’s the first position I look for.

What is something you love about physics?

I love that it’s a practical science. It’s very hands-on, which makes it really relatable for my students. Plus the labs are super fun.

How can physics be applied to the real world?

It’s 100 percent the real world. Even if you don’t go into anything technical or physics related, you can still use a lot of the concepts and skills we learn in this class in your everyday life. For example, it makes you a better driver, since you’re more aware of how the car on the road acts. The problem solving skills will only ever help you in whatever you choose in life.

What has been an important milestone in your journey?

I knew from the time I was in third grade that I wanted to be a teacher. My parents were teachers. It’s just been more fine tuned as I’ve progressed from that young age. I would have a hard time going back to one single event that was momentous that set me on this path.

What has been challenging about teaching AP/GT courses?

I would say the most challenging part is making it suitably challenging for [the students]. But at the same time, that really fires me up to be creative and come up with stuff. That is why I enjoy teaching this level – because of the challenge.

What are some of your favorite hobbies?

Little known facts: I crochet. I make afghans, [a woolen blanket or shawl]. It’s been a while since I made one, but I like to keep my hands busy while I’m watching movies, because I love watching movies so they kind of go together. Right now, I’m currently training to compete in the Highland Games, [an Olympic style sporting competition originating in Scotland]. That’s my newest hobby. I like it because it’s super athletic, and I get to compete even though I’m not a kid anymore.

Do any of these have an impact on your physics teaching?

I’m looking forward to the Highland Games [and] being able to use that in class. There’s forces, there’s rotation, there’s energy and momentum and all sorts of stuff. There’s actually a lot of angular momentum too, but it’s gonna be maybe next year when I incorporate stuff [from the Highland Games] because I’ll know more [about the physics of it].

There are a lot of superhero posters around your room. Are you a big fan of Marvel or DC?

I’m more [of a] Marvel fan, I know I don’t make friends with everybody when I say that. Actually, what got me started on the whole Marvel thing was not the comic books. It was actually the first movie with “Iron Man”. I went and saw this movie, and I was so excited with how well they handled the physics that after it was over, I called my dad and had this huge conversation with him for several hours about how excited I was about all the physics in it and how I could use it in class. So it is really sentimental to me. But I love superhero movies because [yes,] they do bend and break, sometimes, the laws of physics, but Marvel has done a good job at staying true to the actual physics and paying attention to the details.