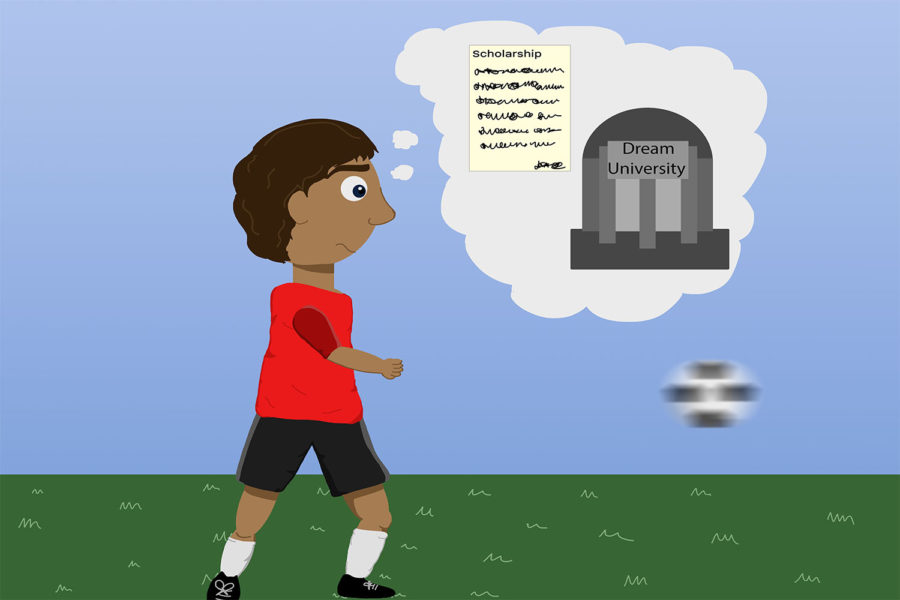 I played club sports all my life, often more than one at a time. However, after looking at the amount of money, time and number of sacrifices my parents and I poured endlessly into it, I began to rethink things.

Looking back, I never intended to make it further than high school – I simply played for the work ethic, the teamwork, the people skills and a dozen other morals I learned along the way.

I realized I could acquire those morals without paying tremendous sums each year and having to miss family weddings for a championship game. Those same lessons could be learned through school sports.

School sports often begin in middle school and continue through high school. Middle school sports are important to learning those aforementioned morals, especially for students who have not previously played sports. That is the time when people ignite their love for sports and develop their discipline at every practice.

However, the culture shifts once high school hits.

“In high school soccer, you just get to come and play with your friends and just have fun. Obviously you still want to win a state championship, but you focus on more than just soccer,” Coppell senior soccer player Mary Ziperman said. “But in club [soccer], your only goal is to be seen by colleges.”

While playing on a club team does increase chances of being scouted, there are bigger lessons that come with playing a sport. To many coaches, sports directly relate to life – being a spouse, son/daughter and friend.

“Life is about a commitment, marriage is about commitment. Sports teach that commitment,” said Marcus boys soccer coach Chad Rakestraw, who coached the Coppell boys soccer team from 2012-17. “But club [sports] just don’t have that same level of commitment. If a player wants to leave a club team, he will. But you can’t leave a school team the same way.”

Nonetheless, playing sports through school gets players plenty of collegiate exposure. Scouts are typically drawn to playoff games, in which there are a handful of high-level players on the same field.

But is more exposure truly better?

In club sports, there is plenty of elite talent. Thus, colleges try to get to that talent before the others. Because of this, players are being recruited earlier and earlier, taking the fun out of the game and putting in the stress of college.

It would seem that getting recruited early on would take the stress out, right? No more worries of being seen by colleges, you have already made it. But in reality, the opposite tends to occur.

Many players will get recruited and verbally commit to a college in their sophomore and, if they are really good, freshman year. Knowing the future ahead of them, those players then have to worry about injury (and losing their scholarship), more intensive training and maintaining or increasing their skill level for the next three or four years.

That does not sound very stress-free.

The best part of playing a sport is the healthy competitive spirit of the game. When that spirit is lost, and the game becomes a lifestyle, and the pressure of club and select sports set in, one loses the basic values that brought him/her to the sport in the first place.

Of course, club sports are beneficial to play, as they develop a hard-working, competitive nature at the root of them, but do not let them get out of hand. Do not let what began as a fun way to spend Saturday mornings become the most stressful decision of your life.

Playing sports through school is the best way to maintain values such as dedication and teamwork, while still maintaining the fun atmosphere of the sport. So while one should not devalue club sports, one should take the benefits of school sports into consideration.