What we thought was the last-straw 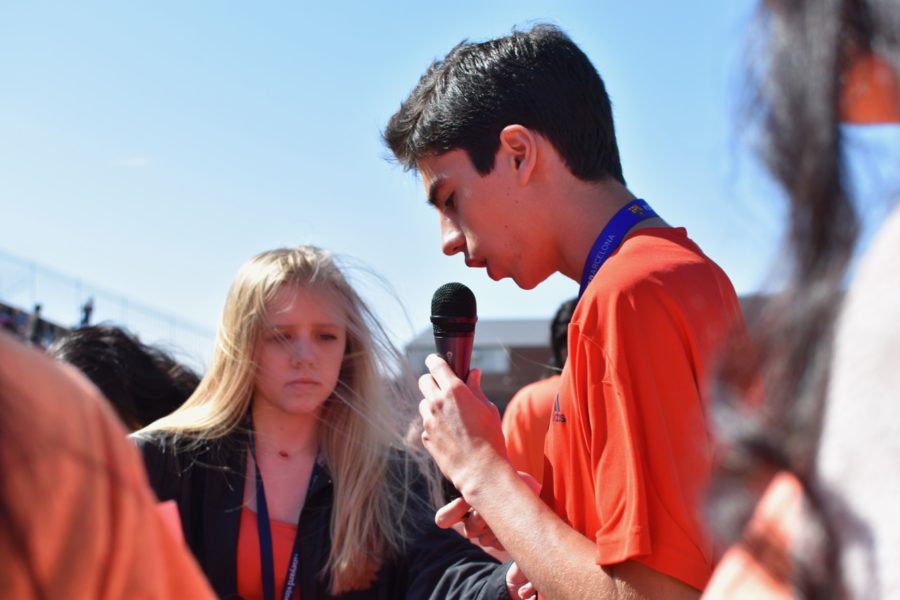 Current Coppell High School juniors Charlotte Vanyo and Nicolas Reyes speak out about gun violence during the school walkout on April 20, 2018 at Buddy Echols Field. One year later, Reyes remains frustrated in the lack of progress in gun reform laws and talks.

A few hours later, 17 precious lives at Marjory Stoneman Douglas High School were reduced to corpses; corpses that became names flashing across the news; names that became rallying calls in marches around America; marches that brought hope but ultimately no change.

As I write these words I cannot help but feel I am rehearsing my lines, lines I have rehearsed countless times. How many more times must I open up an article, an essay or a speech attempting to illuminate some sort of empathy in my audience?

I wonder if I will ever be able to assume that every one of my readers, everyone who is listening, is filled with some sort of remorse, some sort of hunger to aid those who suffer from gun violence daily. I look forward to a future where I will not need to clarify that I am not a radical, that I do not want to ban all guns, that I am not a far left extremist simply because I am tired of the normalization of gun violence.

How far have we come since Feb. 14 of last year?

Not far at all.

The screams that erupted in those hallways will never be forgotten for those who walked out of those doors alive, but those screams have been forgotten by America not much less than a year later. The topic of gun control seems to be only an issue when another school is shot up. Then, Washington D.C. goes into meltdown, everyone prepares for a debate, the media starts regurgitating its propaganda and pushing its side of the controversy, and a few months later it is all quiet once more.

Gun reform has had two national victories since Parkland, the banning of bump-stocks (an attachment that enables a semiautomatic rifle to fire faster) and pro-gun-reform politicians being elected as a majority into the house in Congress. Yet I cannot tell you with certainty that all the “pro-gun reform” congressmen and women will even prioritize this issue over the meaningless power struggle of Washington D.C.

Last year as I attended the Dallas March for Our Lives, I felt hope – hope that, with each new tragedy, is hard to keep up.

It pains me to write this article. There are many things we can teach one another, but empathy is not one of them. Last year I wrote a speech about remembering the victims of Parkland, preaching that we must bring change in their names. This year I do the same. I pray I will not be clicking away at that same sorrowful message 365 days from now.

But for all I mourn, for all the sorrow the ignorance of others produces in me, I refuse to give up. Those of you who seek a brighter future where a place of worship will feel safe, where a school will feel protected, where a concert will be for singing and not for final words, keep your heads up. We still have a lot of fight left in us.

Though there is much we do not learn from history, we do know this: “the people who are crazy enough to think that they can change the world, are the ones who do.”

It may seem we are fighting an uphill battle. But we will remember the 17, we will honor their memories, we will resist.

I refuse to write from this same position next year.