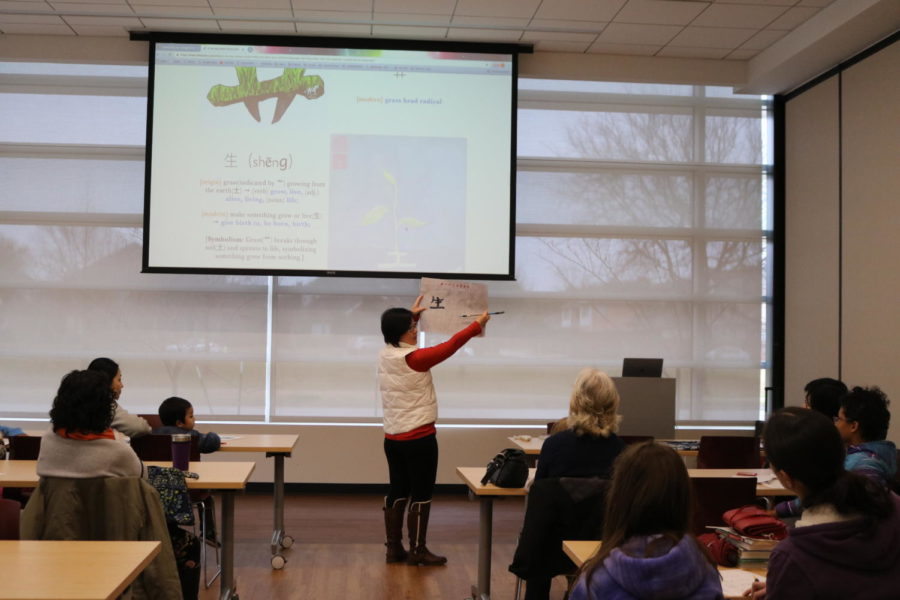 Haiyan Fan explains Chinese characters broken down into 7 simple strokes. Dr.Fan earned her Ph.D. from Texas A&M and now travels with the Fort Worth Museum of Science and History to teach Chinese in a fun and simple way.

On Saturday, Dr. Haiyan Fan guided a group of all ages through basic Chinese characters and phrases at the local library. The language has roots tracing back thousands of years, and is known to be particularly specific in writing and pronunciation. Due to its complexity, Chinese is often perceived as difficult to learn.

“Chinese is a completely different system,” Coppell High School Chinese teacher Andrea Voelker said. “English, you can sound out but there is no way you can sound out Chinese. You have to know the character, what it sounds like, what it means and you have to pronounce it right as well.”

Chinestory is a business focused on providing Chinese learning tools for those interested in learning the language or parents looking to teach their children. Its founder, Dr. Haiyan Fan, holds degrees in both linguistics and artificial intelligence, and was inspired to begin Chinestory because of her background in education and role as a mother. She is the author of two Chinese learning storybooks and frequently leads learning sessions across DFW, often at the Fort Worth Museum of Science and History.

Dr. Fan made use of Chinese culture and illustrations to teach attendees pronunciation and the writing of the characters, including learning about traditions relating to the Chinese Lunar New Year, which occurred on Feb 5. After a short review, attendees were given cards, some with Chinese phrases, some with their English translations, and the task to find a match.

The Chinese language has four tones and around three thousand characters, which are combined to make tens of thousands of phrases, making it surprisingly broad stroke compared to English. This provides a simplicity and efficiency other languages do not possess.

“[I came to this event] to learn how to write Chinese characters,” attendee Jim Reed said. “I studied Chinese for one year – Beijing dialect – it was mostly spoken. I find it to be easy because I also speak Brazilian and Portuguese, which have 16 tones, so [they’re] highly complex in speaking.”

Learning a language is ultimately a long process; one that takes repetition and gradual understanding.

“None of us were taught this way when we were taught in China,” Dr. Fan said, equating understanding pieces of language to building a structure with Lego blocks. “When I’m teaching my kids….they understand a little piece of the Lego and they can put it together: it’s a whole process of making sense.”

Dr. Fan will be speaking at TedX Oaklawn at the Granada Theater this May.