Cowboys neck-and-neck in district running with win over Nimitz 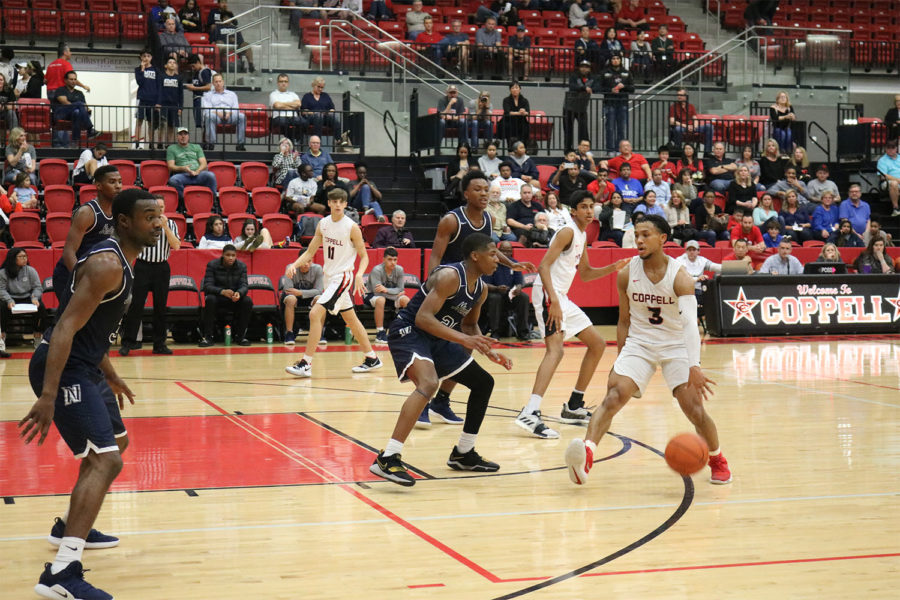 Coppell High School senior Tariq Aman searches for a gap on Tuesday against Irving Nimitz. The Cowboys defeated the Vikings, 60-39.

Just a few minutes after tip off, the Coppell basketball team went four for four on 3-pointers to gain a six-point lead over Irving Nimitz.

Three and a half quarters later, the Cowboys defeated the Vikings, 60-39, at the Coppell HIgh School arena.

Coming off of a loss against Flower Mound, the Cowboys (19-12 overall, 10-2 in District 6-6A) used this win as a confidence boost headed into the final stretch of the season. With only two games to go, the running for the top district spot is a tight race.

Lewisville (25-6 overall, 10-2 in district) is tied with Coppell for first place. If both teams finish the season with the same record, they will share the district title.

“[The game] was more about getting us back to the level we started district play in,” Coppell coach Clint Schnell said. “It was about gaining that momentum heading into our last two games and heading into the playoffs.”

Throughout the season, the Cowboys have proven to be a fundamental team, but have often been less athletic and tall as other teams. While this has posed a problem when it comes to rebounding in the past, Coppell began to fix the issue last night.

“The second half was a lot stronger than the first… and we really attacked the glass well. I think that was the key to winning this game,” senior forward Carter Kryzak said.

The Cowboys play again this Friday at 8 p.m. in the CHS arena against Irving MacArthur.