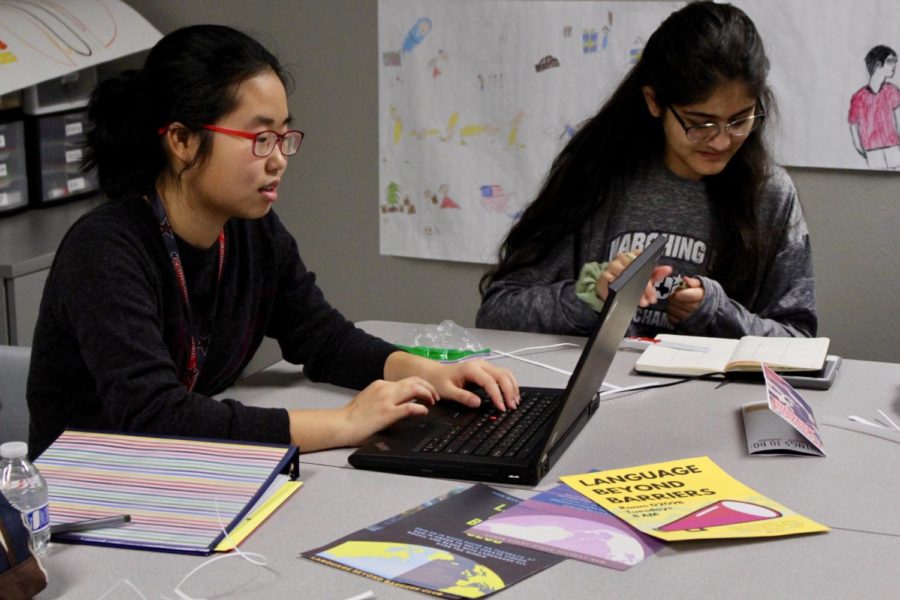 Coppell High School sophomore Language Beyond Barriers club president Lily Lee and sophomore Illina Jayal write stories together with their group before school on Jan. 23 in CHS ESL teacher and club sponsor Shauna Carter’s classroom. The Language Beyond Barriers club is working on writing stories as a group project to create a book for elementary ESL students, the club meets before school every other Tuesday in room D209.

With many cultures present in Coppell High School, one student decided to make a club that showcases this diversity.

CHS sophomore Lily Lee created Language Beyond Barriers club, where ESL students can communicate with other students their age who speak the same language as them to help them learn English.

“For me, I have the ability to speak four languages,” Lee said. “Even though I had a hard time with English in the past, now that I know how to speak English, I want to use what I have to help those around me.”

The club does many projects, with every student having one of four roles: culture ambassador, language ambassador, English tutor and English companion. Currently, the club is working on writing stories for elementary students in ESL, in addition to mini individual projects according to their roles.

This club will not only bring together many students but will also be a learning opportunity with the club’s diverse culture. Sophomore club member Fiona Lopez thinks the club is beneficial for the student body.

“[The club] will help integrate anybody who’s struggling with the English language or anyone,” Lopez said. “It’ll integrate the school and all the cultures together, and [it won’t] have anyone divided. [The club will] have a connected community and group of friends.”

The club consists of roughly 15 students, some of which know more than one languages to teach others.

“CHS is such a culturally and linguistically diverse school, and the purpose of our club is to make students feel welcome and included, regardless of the languages that they speak,” CHS ESL teacher and club sponsor Shauna Carter said via email. “Not only do I feel like they can achieve this goal, I also think having such an amazing group of students advocating for and celebrating our diversity will have a positive effect on the school as a whole.”

This club puts forth the effort to bring students in CHS together, no matter their cultural differences.