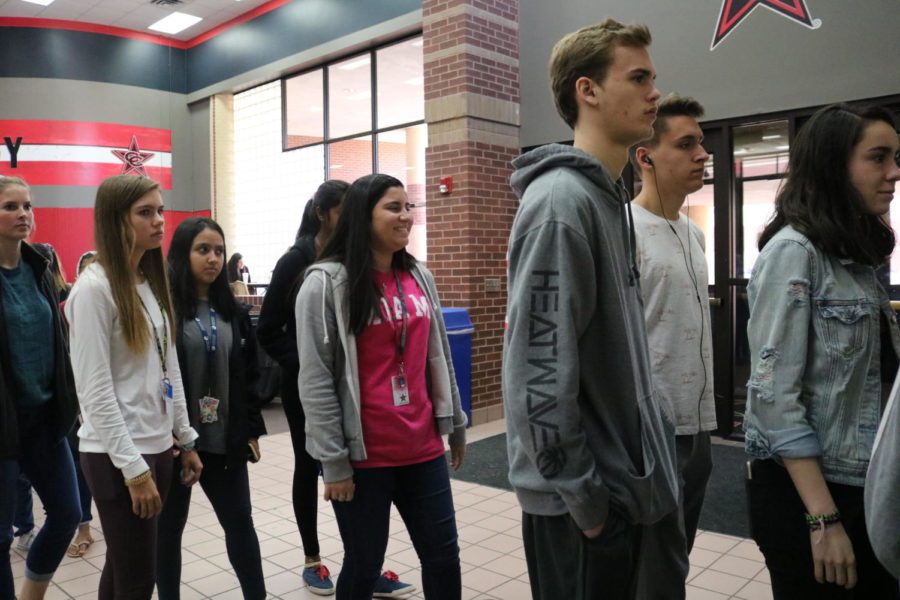 Coppell High School students wait in line to get into the c store during b lunch. The c store is open for all three lunches and serves Chick-fil-A on Tuesdays and Thursdays.

The 2015-16 school year saw various changes throughout the year, including renovations for the Coppell High School store, known as the C-store, to expand and improve its layout.

Despite the project setting its sights on improvement, a string of thefts has occured.

“During lunch, it has become harder for the staff to control all the students running into the store,” cafeteria manager Lillian Cruz said. “While doing all of these [tasks], we have to make sure we are constantly restocking items, and it can get stressful sometimes.”

As C-store works restock shelves and manage the register, the possibility of theft turns into a reality for some of the students that use the store.

“We try our best to watch all areas of the store, making sure students aren’t putting snacks in pockets or purses,” Cruz said. “They are much faster than us, but with the installation of cameras, the school is able to go back and find out what is going on inside the store.”

With CHS’s clear stance on promoting integrity – seen in the beginning of the year through its class lessons – consequences are guaranteed for students caught in the act.

“If caught, we give students at least one day of in-school suspension along with a ban from the store,” associate principal Sean Bagley said. “We built the store as a privilege for the students, and we aren’t afraid to take it away.”

The employees working both the C-store and the lines are allowed to report under the suspicion for stealing. This information is passed down to administration, and if evidence is found, further consequences will be taking place.

After a student has been caught, they are sent to ISS teacher Robin Woodby, who is aware of the recent spike of students stealing from the store.

“Lately, I have had many students that have served ISS time for taking something from the store without paying,” Woodby said. “Anyone that plans on it, I suggest you don’t. It is not worth serving a day of school suspension for something like this.”