Changing lives with one button: spread of Instagram positivity 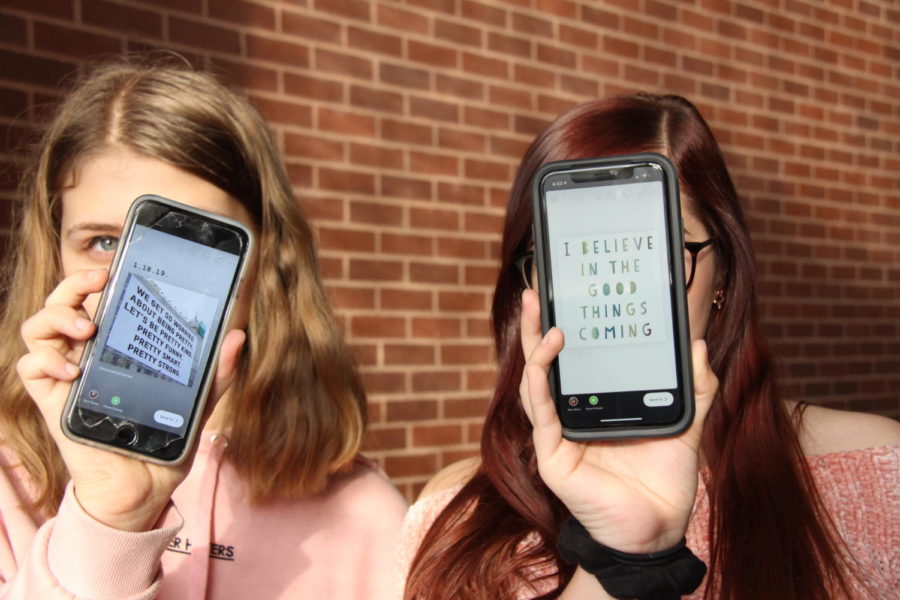 Coppell High School sophomores Natalie Adams and Jordyn Morris have taken to spreading wisdom and inspiration through their Instagram stories (@natalie.michelle_ and @jordynmorris). With short messages encompassing mental health, the daily quotes not only offer guidance in navigating mental illnesses such as anxiety, they also encourage individuals to never stop looking for happiness.

When they first started a year ago, Adams and Morris did not expect an overwhelmingly positive response from their followers. In fact, they were predicting the opposite. However, the reality turned out to be completely different.

“I did a little poll on Instagram asking people what they thought about the things that I post,” Adams said. “The response was overwhelming. People I didn’t even know were saying that it was really important to them, that they looked forward to seeing them every morning.”

CHS sophomore Shreya Joshi has been following both Adams and Morris even before they started posting these messages.

“Whenever I’m scrolling through Instagram on a rough day, [those messages] just lighten my mood and remind me that I’m not going to feel this way forever and it’s just temporary,” Joshi said. “I think that’s something we can all learn.”

Joshi is not the only friend who has let Morris know the impact her Instagram posts have on her life.

“A really close friend of mine commented under my post,” Morris said. “She said, ‘I was thinking of committing suicide tonight and I was praying for a sign; I think this is it and I just wanted to thank you.’”

The impact of these inspiring messages has extended beyond just Adams’ and Morris’ close friend group.

In fact, one of the most striking examples has come from a complete stranger.

For Adams, a boy she had never encountered in real life responded to a message about being able to share something important. That single post had pushed him to start a conversation with his parents about how he was feeling about his mental health, how he was thinking of medication and therapy and how he just really needed help.

“It really hit me,” Adams said. “It’s so small for me, just five seconds of sharing a post, but for this person, it literally changed his life, and I didn’t even know him. That was the day I realized I have a lot bigger of a voice than I think I do.”

While these quotes now help others overcome both mental and physical obstacles, it did not start that way.

These inspiring messages were originally a source of positivity for Adams and Morris themselves.

“I started turning to these quotes in a time when I was struggling with my own mental health and my own positivity,” Adams said. “Later, I realized if I was going out of my way to fill my own feed with positivity, then why shouldn’t I take an extra five seconds to post it to my story and share it with other people and not just keep it to myself?”

For Morris, the beginning of these posts also came from her own struggles and unhappiness.

“I went through a really rough period freshman year where it just felt like everything was crashing and burning,” Morris said. “I didn’t feel like I had anywhere to turn for the longest period of time. It was such a long process of picking up the pieces and rebuilding myself, and I realized that I could channel my pain into something that could help other people.”

What had started as a way to deal with their own pain is now a way for Adams and Morris to connect with their followers, which reaches above a thousand.