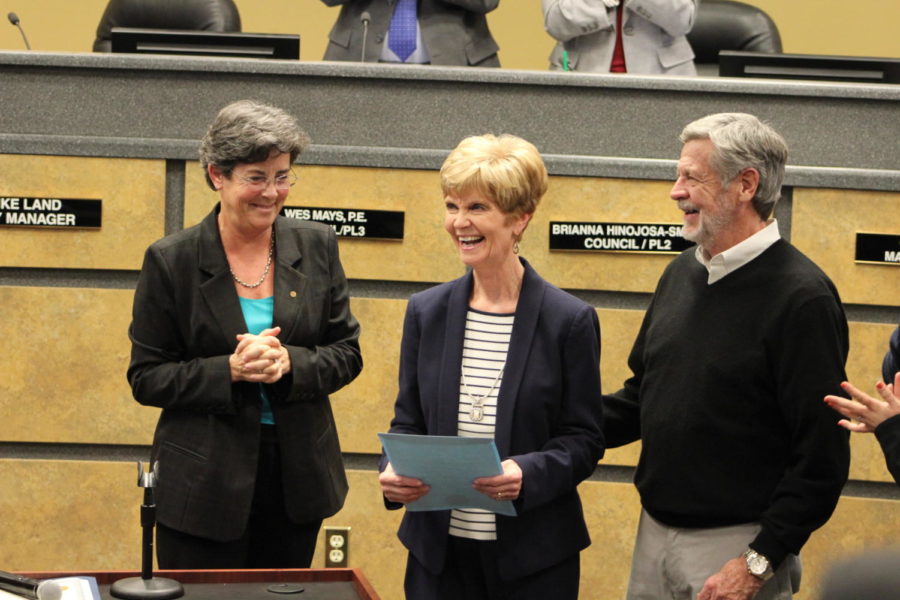 Sara Fulton, senior administrative secretary for the Coppell Police Department., is retiring from her position in the City of Coppell. Fulton has served for almost 25 years with the police filling a number of important administrative roles within Coppell.

“It has truly been a pleasure to get to know you over these years,” Mayor Karen Hunt said to Fulton. “You always have this huge smile on your face, and by the look of the group here, it’s enough for you to understand how much you were loved. This is our opportunity as a city council to recognize you.”

In addition to announcing Fulton’s retirement, the council swore in two alternate judges to replace current alternate Judge Kristine Primrose, who stepped up to take Presiding Judge Terry Landwehr’s position last meeting. Judge Kimberly Lafferty, from Lewisville, comes with 17 years of municipal court experience. Judge Peter Graham, who is currently an associate judge for the City of Irving, was also sworn in as alternate judge.

The Council approved Phase I in a two-phase request of a hotel complex plan from Whitestone Hospitality which has been in the making since June 2018. The complex will be located in the triangular patch of land between Sandy Lake Road and State Highway 121 and feature a Home2 Suites by Hilton residency hotel and a La Quinta Hotel. The builders are planning to preserve a patch of oak and elm trees that sits on the land as a public installation. The council also viewed a presentation on the expected finished product complete with blueprints and artistic renderings.

“We’re really trying to create an atmosphere, a destination,” Gary McCullough, the architect for the Whitestone complex said. “We have the hotels on the right, and then restaurant retail on the left. It’s going to be for business travel.”

One of the main points of discussion was the plans for a sign along State Highway 121. A request was placed to make an exception of size to the city sign ordinance which the planned sign did not meet. The plans called for a 40-foot tall sign that had the City of Coppell logo at the top facing highway traffic. Much of the Council agreed to go with the taller sign without the city’s logo and instead possibly the original plan of a digital marquee.