My pink skirt doesn’t define me, and it shouldn’t define you 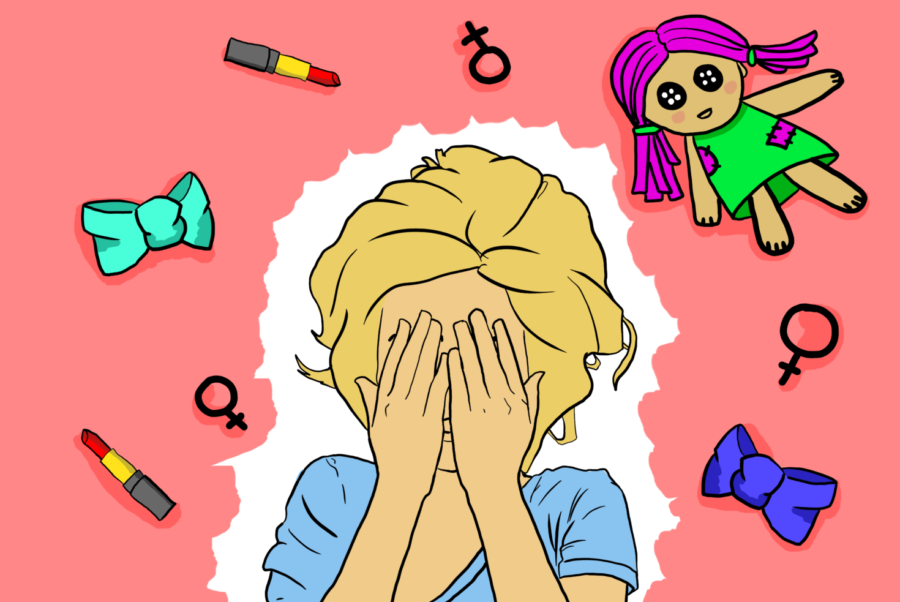 Growing up as a girl comes with many stereotypes. Claire Clements, The Sidekick editorial editor, describes her experiences with these stereotypes.

I used to hate the color pink.

It wasn’t that I hated the color itself, but the fact that growing up, pink was associated with girlinesss. And growing up, girliness was bad.

I don’t have any siblings, but I have a cousin I grew up with who is basically my brother. When he was younger, he acted a lot like most little boys his age, and he associated girls with being weak, stupid and only caring about clothes and makeup.

That, along with many people pushing this idea onto me, made being a girl seem like something I should not be associated with.

With the way society often defines being a girl, can you blame me?

When girls aren’t associated with these stereotypes, we praise it.

What’s so wrong with the “other girls”?

The answer is, of course, nothing.

But growing up, I didn’t know that – so I distanced myself from anything girly.

I wasn’t the only girl doing this. Ironically, I know many girls who, in an effort to be different from other girls, chose to distance themselves from traditional femininity, even if they weren’t being true to themselves.

We became our own group – the “different” group – but in the end, we weren’t that different from each other.

But then, around eighth grade, I started to read more and more about feminism – and I started to understand that, maybe, being a girl wasn’t something bad.

I learned to own myself, girlhood and all.

Now, I like pink. And skirts. It wasn’t a change in preference, because I’d always liked them, but a change in viewpoints.

The first viewpoint that has changed for me is that being a girl is bad: It’s anything but. When a girl wears a full face of makeup everyday, that doesn’t mean she’s stupid or shallow. She just likes makeup. When a girl likes short skirts, she’s not looking for attention. She just feels good in short skirts.

The second viewpoint that has changed for me is that girlhood is defined by pink skirts. I like pink skirts, but that’s not what makes me a girl, and that doesn’t make the girl who prefers black pants over pink, floral dresses not a girl. It just means I like pink skirts, and she likes black pants, but we’re both girls who deserve just as much respect as the other.