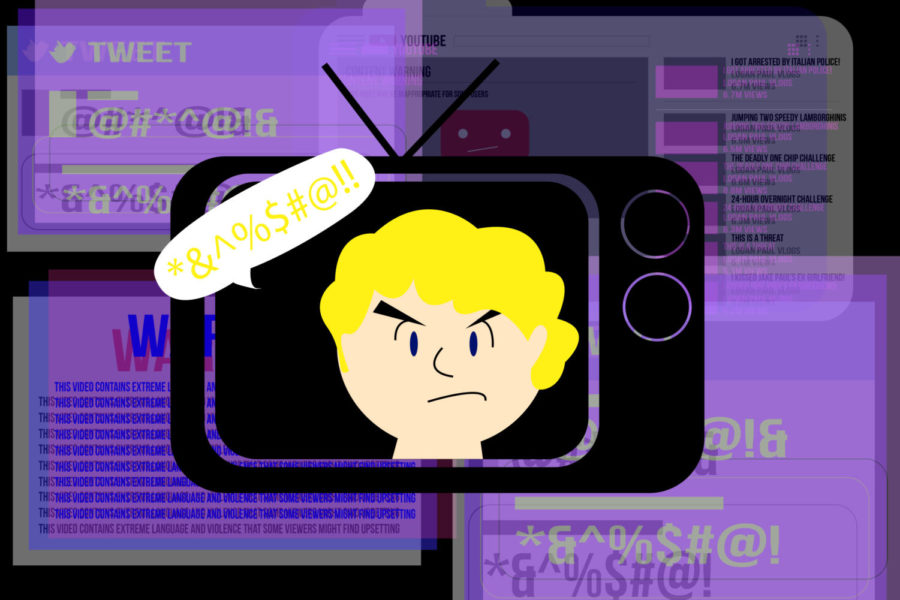 Many celebrities on popular entertainment platforms such as YouTube and Twitter have negative influences on youth. The Sidekick staff writer Shravya Mahesh explains the value of looking up to the right people.

As a child, my mother banned me from watching Disney Channel, saying it was “not appropriate for a 7 year old”. She was not to blame – she simply wished to bring me up with as positive of influences as possible, and the dating plotlines and teenage humor of these shows simply did not cut it.

Yet a mere 10 years later, the world has changed dramatically. In an age of technology, young people learn about entertainment through school and friends. The knowledge, in itself, poses no problems; it is the celebrities in entertainment who cause an issue.

The youth look up to these people, maybe seeing a hopeful future self in them or simply admiring them for their talents. Yet many celebrities act carelessly on these platforms, using vulgar language, acting hatefully and teaching children negative things.

When someone is under a spotlight, they should be wary of how they conduct themselves. Their actions and speech influence those around them, whether they like it or not. And of those watching, children are the most impressionable.

This can be simply explained through Canadian-American psychologist Albert Bandura’s 1977 Social Learning Theory, which states people copy the behaviors of those they see. Based on reactions to the behavior, the person will either cease or continue the behavior.

Similarly, young people copy the actions of those they see on television, social media, online and other forms of entertainment. It becomes an issue when the celebrities do problematic things, especially because a child knows no better than to blindly follow. And if parents do not monitor this, serious issues can arise.

“Because [celebrities are] so in the public sphere, their actions say a lot about their values and that can have a lot of consequences for how people think,” Coppell High School senior Amanda Figueroa said. “They have the power to change how people think so they should take that responsibility carefully.”

Of late, YouTube consumption continues to rise, exposing young to both positive and negative content. YouTubers Logan and Jake Paul frequently find themselves under scrutiny for their content, which often promotes racism and prejudice. Such content is rampant on the platform, leaving children susceptible to the toxicity.

The music industry boasts plenty of its own issues. Much popular music is jammed with profanities, drug references and objectifying lyrics. Many artists claim their music is “empowering” or an “expression of their artistry”, yet they miss the mark completely, trivializing serious issues.

However, this is by no means a call to blindly “cancel” an artist, or write them off, almost saying they are hopeless. As humans, we all make mistakes; it is only that celebrities have an extra spotlight on them. The issue of separating art from the artist sparks a different debate, but in general, a person’s actions do not blacken them as a human.

“It’s not that black and white,” CHS junior Akshara Ganesh said. “People do negative things sometimes that can have negative impact on the people that follow them, but it’s not like they are always a negative influence.”

There is, for one, Alessia Cara, who not relates to the youth with emotional songs about growing up, but proves personal comfort is immensely important with her simplistic style.

There is BTS, who promote self-love and acceptance through its sincere artistry.

“A good role model for me is BTS,” CHS junior Sai Neelanjana said. “Their idea that people should love themselves before spreading love is truly a good message.”

There is Emma Watson, who inspires young people to follow their dreams and advocates for gender equality through her organization He For She.

Rather than focusing on the dramatic lives of people who teach us to be insecure or change our appearance to look like them, we should focus on ourselves and be guided by the entertainment icons who encourage us to be the best we can.