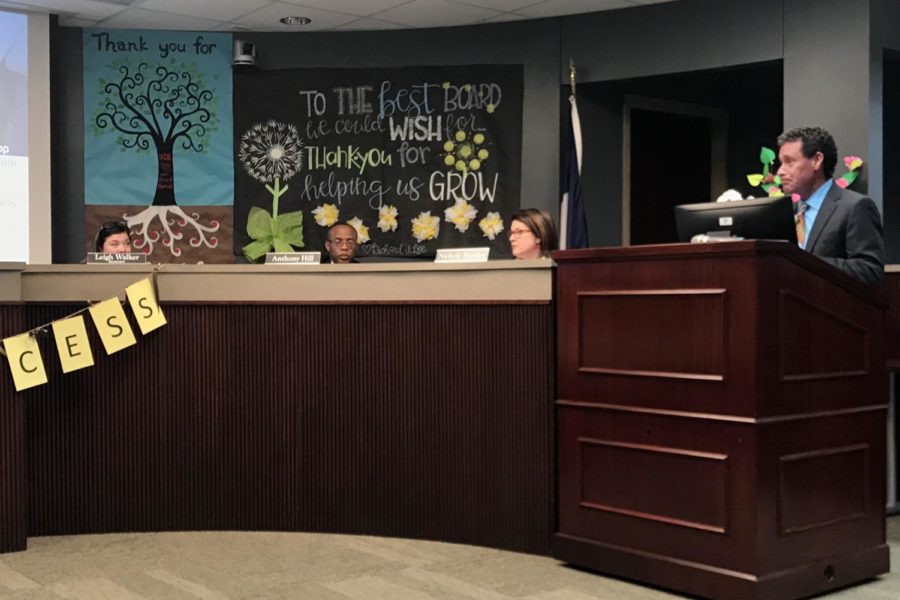 Coppell ISD associate superintendent Sid Grant addresses the Board of Trustees on the boundary realignment updates during the CISD Board Meeting on Monday. After months of working with demographers to properly delineate between campuses, several concerns are still apparent from parents in the Irving area.

On Monday night’s Coppell ISD Board of Trustees meeting, a full house gathered to support both elementary and secondary Teachers of the Year.

Surrounded by their family members, friends and coworkers, campus Teachers of the Year were also acknowledged for qualifying for National Teacher of the Year, a program that recognizes and rewards excellence in teaching and is the highest honor awarded to an educator of the United States.

Emanating the celebratory notes, since January is School Board Recognition Month, the board was thanked for their dedication and sacrifice. The theme of the 2018-2019 school year for CISD was planting seeds of greatness, an achievement the seven board members were recognized for through a video compilation of each school in the district.

“[The board’s] story of giving has many chapters,” Superintendent Brad Hunt said. “The first one outlines their main responsibilities. If we were actually reading a book, the second chapter would address the ‘why’ behind the commitment. Their service as trustees comes from much self-sacrifice and huge hearts for each child in Coppell ISD and public education as a whole.”

After giving thanks and recognizing both the Board of Trustees and the Teachers of the Year, the meeting transitioned to the open forum. This portion of the evening focused on realigning the school boundaries for the 2019-2020 school year, following the new elementary school in Valley Ranch, Canyon Ranch Elementary.

Several parents voiced concern on the new boundaries that would not only affect elementary school students, but middle schoolers in Coppell Middle School East. The decreasing diversity and hindrance on friendships were among the few concerns.

Irving resident Jennifer Lee’s son attended Valley Ranch Elementary when his school was rezoned and half of the school was shifted to Lee Elementary. In the upcoming year, he will need to shift once again from CMS East to CMS West.

“It’s unconscionable that the same children that were asked to move and split up their friendships three years ago are the same children asked to do this again,” Lee said. “That is too heavy of a burden to put on children when their No. 1 reason to go to these schools is their friendships. We want them to have these life-long relationships and it’s unfair to ask children to give that up.”

If the boundary realignment occurs as scheduled, Lee’s son will be one of eight percent of Caucasians in his class.

Associate superintendent Sid Grant briefly expounded on the reasoning behind the boundary realignment, revealing that the district has worked closely with professional demographers.

“With change and movement, there are always going to be varying opinions as to what is the best solution,” Grant said. “This is a very difficult process; we’ve looked at a lot of different scenarios and we’ve tweaked the models several times.”