Primed for action: Cowboys strap up for a new season 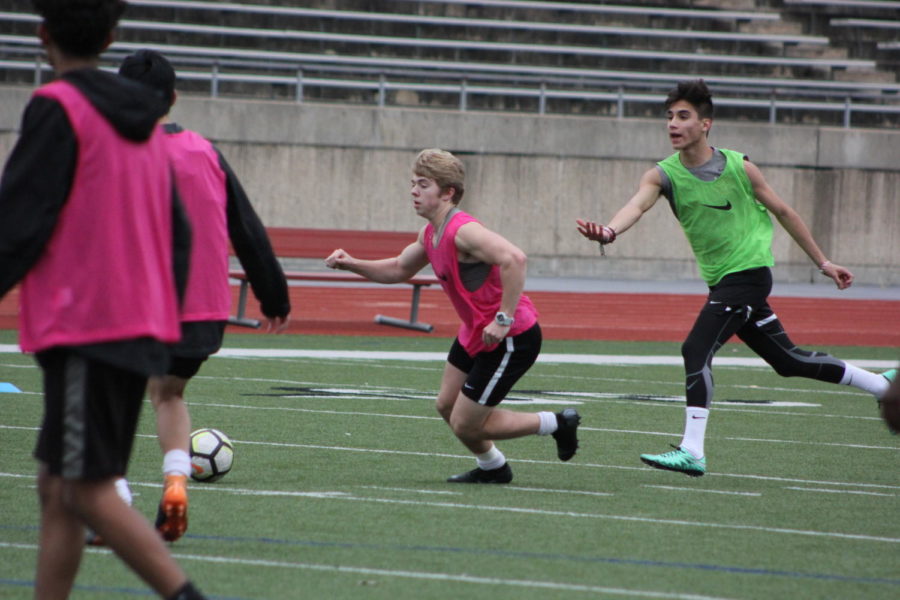 Coppell High School seniors Blake Bartlett, and Jacob Vasquez scrimmage against each other during practice before school on Buddy Echols Field on Dec. 17. The Cowboys soccer teams first game is Dec. 28th against Sam Houston at Buddy Echols Field at 2:00pm

The Coppell boys soccer team has had an eventful past couple of years, with both ups and downs. However now equipped with a new generation of players, the team is once again aiming their sights for state.

After winning the prestigious Class 5A in the 2016 season, the Coppell boys soccer team had walked into the 2016-2017 season with high hopes for themselves.  However, the Cowboys’ hopes of clinching its second state championship in a row were shattered when they lost in the regional quarterfinals.

The Cowboys entered the 2017-2018 season with the desire to reestablish its reputation, and performed fairly well – fighting their way to the Class 6A semifinals where their dreams of winning were dashed in a 3-1 loss against Ronald Reagan High School.

This season, the Cowboys are eager for another shot at once again holding the title of state champions. In a span of a year, Coppell has lost a majority of its senior-heavy varsity roster from the previous year, leaving space for a new generation of players. Previously a team with 22 experienced seniors, the new line-up is an even balance of both juniors and seniors; as a result,  it is nearly not as experienced as its predecessors.

But though Cowboys lack experienced key players such as Wyatt Priest, who graduated in 2018 and now plays at SMU, they make up for it with their fluid team play and solid chemistry on the field.

“Last season, we had a lot of talented individuals who could play by themselves,” Marez said. “However, in this year’s team, I can already see chemistry in our plays that I have never seen before in my years as a Cowboy. The chemistry and the will to take risks we have is something that is really going to help us this season.”

According to Coppell coach James Balcom, this year’s squad possesses the ability to create explosive plays to weave behind the opponent’s defense and is much more dynamic off the ball. Last season, the Cowboys excelled at maintaining possession of the ball but could not always produce fast offensive plays like this years team.

“[This year], we have talented players but maybe not at the level we had last year,”  CHS junior midfielder Sebastian Blaas said. “Since we don’t have the same amount of talent as last year, we are going to have to be a lot closer and find success as a team rather than individual success.”

With the season starting Dec. 28 against Arlington Sam Houston at Buddy Echols Field, Balcom has chosen to stick with the 3-5-2 (three defenders, five midfielders, two forwards) formation the team experimented with last year. The 3-5-2 formation does not need too many defenders, which fits with the roster. Also, the team has several quick-footed wingers who are perfectly utilized in the formation. The Cowboys can always fall back on the classic 4-3-3 too, a basic formation Coppell players have been well accustomed to since their days on JV2.

“It is going to be a challenge to us to replace the players we had last year,” Balcom said. “But these guys are hungry to prove they can win and they can be the team to win it [state championship] again.”