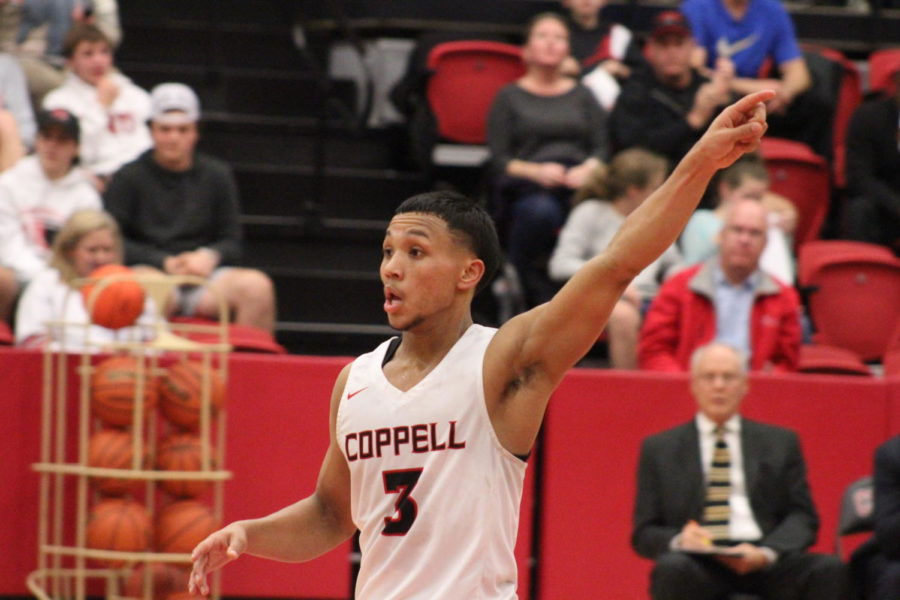 Coppell High School senior guard Tariq Aman directs his teammates while waiting for a pass. The Cowboys defeated Rockwall Heath, 59-55, on Tuesday in the CHS arena.

With less than a second left on the clock, a buzzer-beater by Rockwall-Heath senior guard Kameron Pruitt, the Coppell basketball team was tied heading into overtime last night.

However, the Cowboys were able to take the lead and win, 59-55, at the CHS arena.

During overtime, the Cowboys were able to keep the ball away from the Hawks, forcing them to foul. Big plays by junior Adam Moussa, pushed the Cowboys past the Hawks last night.

“We stepped up during the second half, but we need to stay consistent,” Coppell coach Clint Schnell said. “Taking good shots and getting the ball to our scorers, I think was the biggest thing.”

In the first half, the Cowboys struggled to put points on the board, against the Hawk defense. However, freshman guard Ryan Agarwal was able to hit two 3-pointers during the first quarter, to stay in the game.

“We knew that every shot would be important in this game,” Agarwal said. “The team had some wide open looks, and we were able to hit some important shots to stay in the game.”

One consistent aspect, however, was the ability for the Cowboys to move the ball around in the paint. This opened up the opportunities for senior point guard Tariq Aman to shoot multiple 3-pointers and a few layups throughout the second half.

The Cowboys return to action Friday as they travel to Lewisville to face the Farmers, in their first division game of the season. The game will start at 8 p.m. in the Lewisville arena.