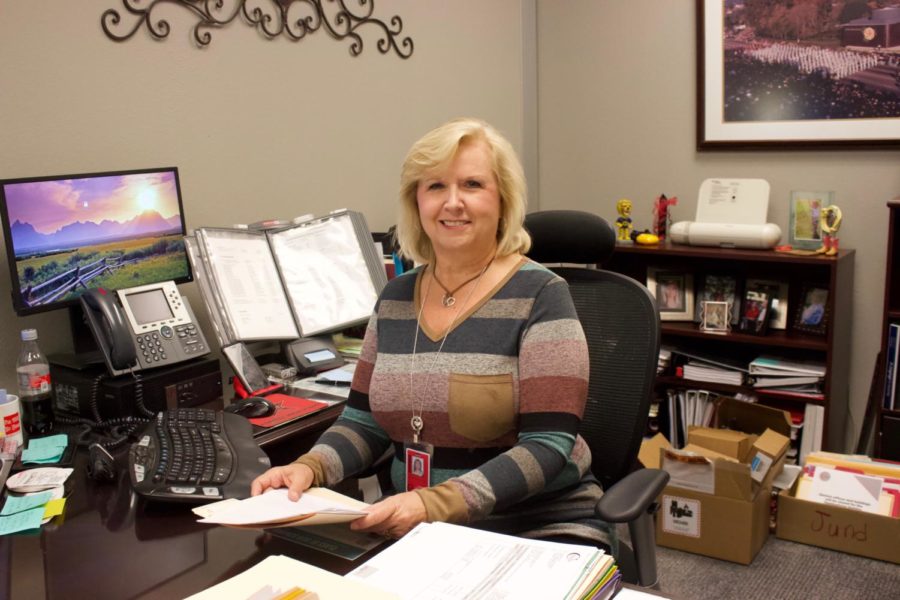 Coppell High School principal secretary Terry Phillips is retiring after almost two decades of working at CHS. Phillips was raised in Coppell as part of the 1978 graduating class and joined the district in 1998 as the In-School Suspension supervisor for Coppell Middle School West.

Every time Coppell High School Principal Dr. Nicole Jund calls out “hey, Terry”, her phone turns on as if she said “hey, Siri”. This playful attribution of Terry Phillips to an all-knowing, voice-controlled assistant is only a slight hint to the trust and reliance many have put in her in over the years.

After almost two decades of working at CHS and a lifetime of living in Coppell, Phillips’s retirement does not imply her presence is disappearing from the community; in fact, the legacy she has created will last as long as the city itself.

Coppell has become an integral part of Phillips in every sense of the word: she was raised in Coppell as part of the 1978 graduating class and joined the district in 1998 as the In-School Suspension supervisor for Coppell Middle School West before moving on to the high school in Student Services as the assistant principal secretary in 2000.

In 2006, she became the principal secretary—a position intrinsic to CHS.

“In the administration, we always joke around there’s that one secretary that pretty much runs the school,” associate principal Sean Bagley said. “That’s Mrs. Phillips.”

Even before her role as principal secretary, Phillips has proven her worth to the CHS administration. Back in 2000 when Phillips was secretary for then assistant principal Mike Jasso, he recognized Phillips’s importance and irreplaceability.

Phillips served as Jasso’s secretary while he was CHS principal from 2012-2017.

For Jund, the short 18 months working with Phillips has not lessened Phillips’s impact on her in the slightest.

“[Working with her] is just good,” Jund said. “I know that’s not a very complex SAT word, but there’s nothing but positives that come from her. She takes care of all of us and puts our needs before her own. Not everybody is put together that way, and that makes her a pretty extraordinary person.”

Extending beyond the administrative side, the significance Phillips has within the school is also apparent with the students of CHS. While spending a majority of her time inside her office and behind her desk, it is not the paperwork Phillips enjoys most about her job — it is the children.

“My favorite part is watching the students grow,” Phillips said. “It’s just fun seeing those freshmen come in and become leaders: national and international leaders. That’s what I love about our school. We nurture our students and grow them into leaders and to be important community members; we give them the opportunity to grow and learn.”

Phillips has spread her time and effort beyond just the CHS building; along with her husband, retired Coppell City Manager Clay Phillips, she has made a long-lasting impact on the numerous facets of Coppell.

In 1993, Phillips played an essential role in establishing Sunday School at GracePoint Church, and after substituting in the classes, she became the school director her third year. Her involvement in pioneering a school at her church is simply the tip of the iceberg regarding her activity within the community.

“She’s never been idle,” Clay Phillips said. “That’s a challenge for both of us as we go onto this next phase [of retirement]; we want to make sure we’re still doing something that’s meaningful, that’s fulfilling.”

Most of all, more than just the material items Phillips is leaving behind, it is the way she has personally impacted the lives of others that will remain the most memorable piece of her legacy. Phillips was CISD Superintendent Brad Hunt’s secretary when he was CHS principal from 2006-2011.

“She has a legacy of caring, of commitment, of loyalty,” Hunt said. “She has set the bar very high and really is an invaluable member of the team. She’s leaving behind a legacy of spirit and pride; her blood truly bleeds Coppell red and black.”

The 2018 fall semester is Phillips’s last working in CHS, but the end of her time as principal secretary does not signify the end of her involvement within Coppell. In the past 20 years, the Phillips have not missed more than four football games and plan to keep cheering on the Coppell Cowboys in the stands; their involvement with the community does not end with their retirement.

“We are part of the community by DNA,” Clay Phillips said. “It’s in our being.”