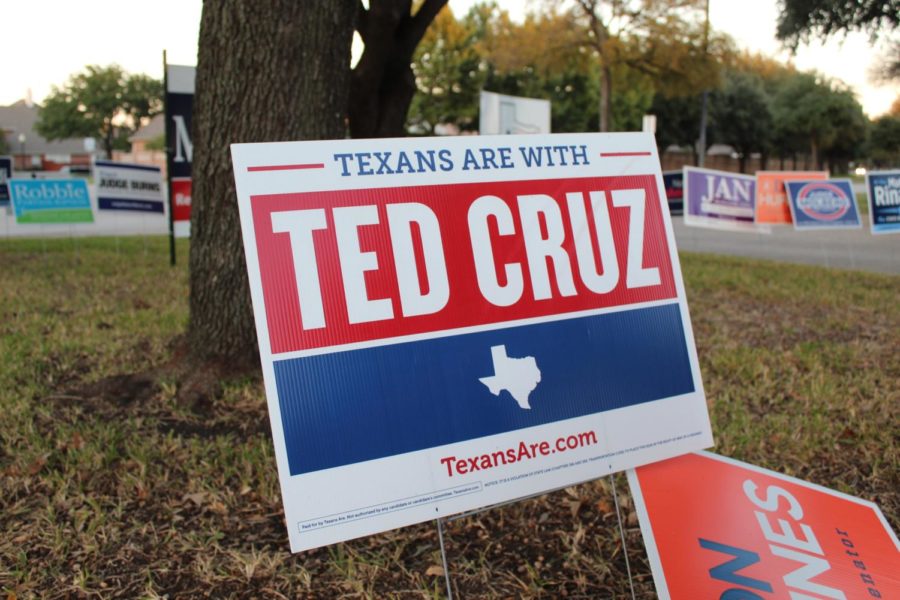 For the past several months, Texas senator nominees Ted Cruz and Beto O’Rourke had competed for the votes of Texan citizens for the 2018 midterm election. It was announced on Nov. 7 that Cruz had won the election and would reassume office as U.S. Senator for Texas.

I, along with my family and closest friends, was relieved to hear that Senator Ted Cruz was re-elected for a second term.

For the past six years, Cruz has served as a U.S. senator for Texas and has done so with honor and dignity. Throughout his life, he has believed in and fought for a decentralized government, economic growth and prosperity and a strict interpretation of the U.S. Constitution. After having won the Texas Senate Election of 2018, he can continue where he left off.

“[Cruz] has been doing good things,” Coppell High School senior Stanley Kilgo said. “He has been lowering taxes for us, which is a good thing because then we would all have more room to develop economically. [O’Rourke] will want to raise taxes, and while he may have good intentions, it’s [going to] cost a lot for the middle class, and it will definitely take a toll on the economy around here.”

It had been clear over the course of the race O’Rourke’s interests do not line up with those of traditional Texas folk. While he may appeal to those living in large urban centers, such as Dallas, San Antonio and El Paso – where he served as a city councilman from 2005 to 2011 – he does not share interests and ideals with the common Texan small town citizens.

While O’Rourke visited each and every county in the state of Texas, his advocacy for bigger, more centralized government, higher taxes and an ideology that is polar-opposite to traditional conservatism still inevitably distances him from the core values of Texas.

With higher taxes and an economy tampered with by O’Rourke, Texans would not be able to function at the same level they have since oil was first discovered in Texas in 1901.

According to O’Rourke’s website, he had promised to “promote policies that encourage companies to focus on returning investments back to their consumer, their employees and to the community”.

Socialism is the idea all income and economic wealth is controlled by the state. It is not out of line to say that the policies O’Rourke had planned to implement if he had been elected senator resemble socialist and communist ideas once imbedded in the core of governments such as the U.S.S.R, which collapsed nearly 30 years ago due to a faulty economical system. When O’Rourke promised to “promote policies that encourage companies to focus on returning investments back to their consumer, their employees and to the community”, he had promised to force private business owners to “give back” to their community, which is A. something he cannot do, and B. something that goes totally against capitalism and the American way.

If history has told us anything, it is that socialism or systems similar to it do not work. An economy as large as Texas’s would surely cripple under such a system and the folks living under a form of governing that resembles socialism would not thrive like they have before and can again now.

While O’Rourke’s promises sounded all well and good, it is important to remember all of this would have been achieved at the taxpayer’s expense, meaning less money in the pockets of private citizens and in circulation for private businesses and more money in the hands of the central government.

Cruz is about the people. He is about jobs and the economy, and he knows the needs of Texas citizens better than any other contender had.

“[The election results] are your future,” Cruz said in an interview with CHS broadcast station KCBY-TV. “It’s the jobs you get when you get out of school, it’s your freedoms. If you look at the Constitution and the Bill of Rights you see freedom of speech, religious liberty and your basic rights. I’m willing to fight for them.”

Another topical issue that has Texas and all Americans concerned at the moment is the immigration and border policy. O’Rourke had promised on his site to “end the militarization of our immigration enforcement system”, meaning the abolishment of the Immigration and Customs Enforcement and removal of U.S. soldiers at the Texas-Mexico border, leaving the Rio Grande checkpoints exposed for illegal aliens to cross over into our nation.

If O’Rourke had been elected senator, all citizens of Texas would have fallen victim to a man who does not know how to properly serve the office. The economy, the job market and the security of our borders would have been in the hands of an idealistic and inexperienced far-left city councilman, which could have only proved perilous to the Texas folk.