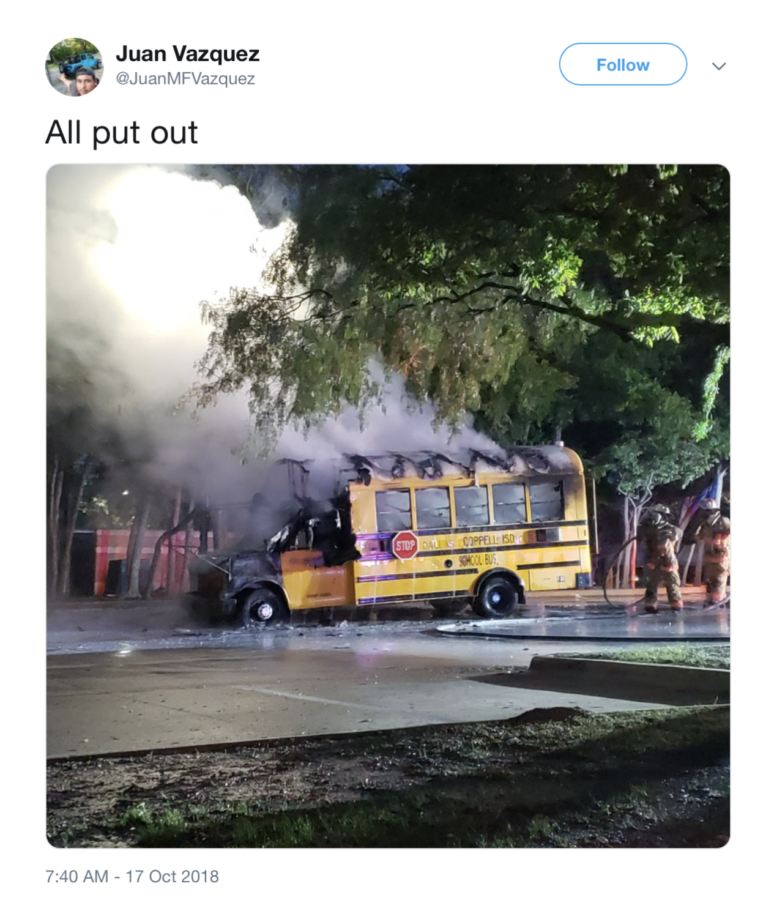 A Coppell ISD school bus caught fire while on its route from Irving to Valley Ranch Elementary. There were no reported injuries.

This morning, a Coppell ISD school bus caught fire while on its route from Irving to Valley Ranch Elementary. The bus was carrying two students, a bus monitor and its driver.

There were no reported injuries.

The bus driver was quick to notice smoke coming from the bus engine. The driver, whose name could not be released, promptly pulled the bus over safely and evacuated all riders. The cause of the smoke and subsequent fire is currently unknown. He alerted authorities and Irving Fire Department responded to the scene.

(UPDATE: On November 2, 2018 CISD Superintendent Brad Hunt revealed the cause of the bus fire which took place on October 17, 2018. A report revealed that a  faulty wire harness, which had deteriorated over time, exposed a 12 volt cable to a metal component of the bus’ engine.  There was enough heat present that the cable welded to the metal component, thus igniting the fire.)

According to CISD, the driver followed safety protocol and acted accordingly, in coordination with the bus monitor, to secure the safety of those on board.

“In this day and age we really want to train our community to come to us as the source of information,” CISD director of communications Amanda Simpson said. “When in doubt if you can’t reach somebody on the phone or anything like that, our social media and website is there to access information.”

Durham School Services bus drivers receive intensive safety training and courses. They undergo a total of around 60 hours of training (plus additional meetings) to gain their certification.

“I want to commend the bus driver for following the safety protocols in place and for his efforts today to ensure the two students, bus monitor and himself were evacuated safely,” said CISD Superintendent Brad Hunt in an email released to all district parents and personnel.