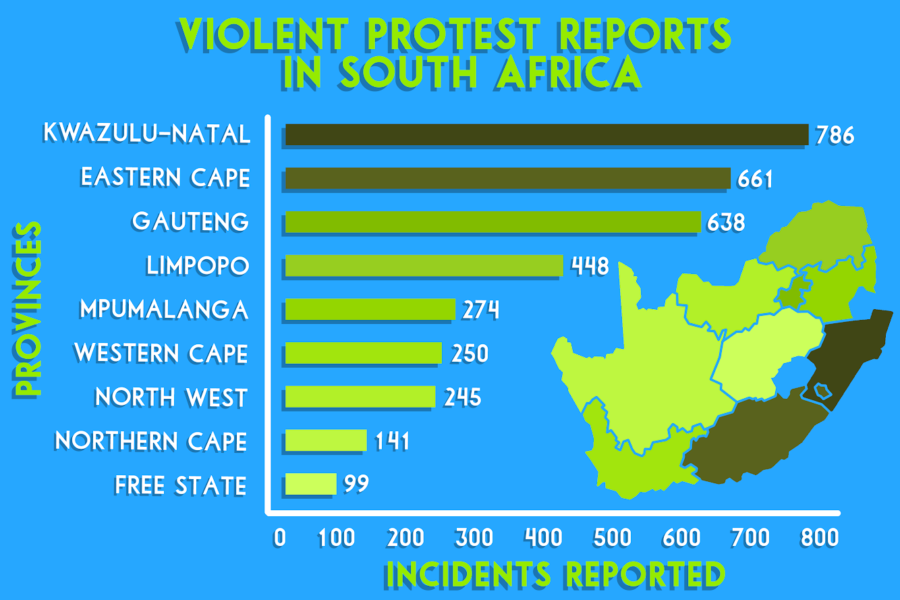 Amongst the provinces of South Africa, KwaZulu-Natal is recorded with the highest number of violent protests while the Free State has the lowest number. Public protests have grown more violent over the past five years, causing police to look past other serious crimes.

Pro: Protesting is more than just effective, it is necessary 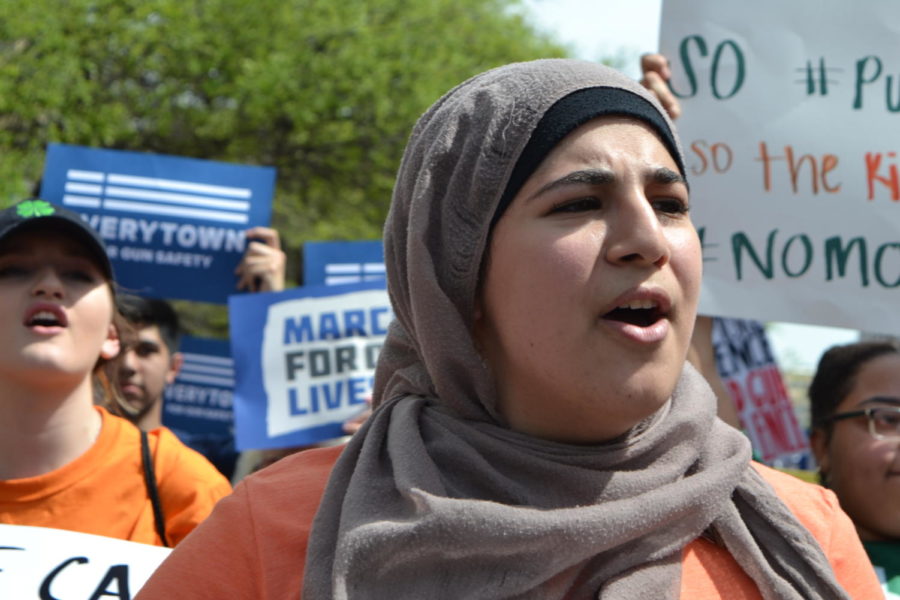 Students protest as a demonstration of support for tighter gun control. The student-led March for Our Lives took place in downtown Dallas on March 24, resulting in a turn out of about 5,000 people.

Three simple words can cause heated arguments at the dinner table. Headlines flash with immediate news of the Women’s March and the Time’s Up movement and everyone suddenly has an opinion about everything.

This is nothing we have not seen before, but when does the debate end? At some point, the people deserve some facts.

There are several types of protests that have been used to get a point across, such as the chain-yourself-to-a-tree protests and your classic hold-up-signs-and-walk-around protests. Mentioning them may have pulled up an image in your brain of what I mean, probably because some of them have been so big and controversial they became historical presences in society.

Let’s take racism, for example. In today’s world, the modern anti-racism movement is Black Lives Matter, an organization intent on intervening between violence against black communities by law enforcement.

Fighting against oppression, racial inequality, biased political and social views… sound familiar? If the 1960s in the United States did not pop into your head, something is wrong.

Protests and uprisings that began because of these same reasons include the Montgomery Bus Boycott, the Sit-Ins, the Freedom Ride, Birmingham, the March on Washington, Mississippi Freedom Summer and Selma – just to name a few.

With all of this proof, it is still a wonder that people doubt the effectiveness of what protesting can do.

“Awareness has a way bigger effect than people think it does,” said Coppell High School junior Molly McGill, who helped organize the CHS March For Our Lives walkout in March. “When someone forces you to listen by interrupting your daily schedule and protesting, you notice. Especially through social media.”

Social media is an easy way for any person to access the progress or status of any march they would like in seconds, and it also serves as a good way to keep us politically informed in the most convenient way possible. Take the #MeToo hashtag movement for example. Whether you think it has strayed from its original path or you love and support the cause with all your being, this movement essentially dismantled Hollywood and put it back together again.

“I watch the news every single morning and I have a ton of news apps on my phone,” CHS sophomore Natalie Adams said. “I’m very involved in public events or protests that can get my voice out there. I feel that it’s really important to be informed about the society I’m living in.”

March For Our Lives is another extremely predominant torpedo of change that paved its way into the limelight this past year. It put the government on the spot about student safety in America and gun violence, which influenced thousands of schools across America to take extra precautions concerning the admittance of strangers into the building, including our own.

It also invigorated the debate about whether or not politicians should accept money from the National Rifle Association. March For Our Lives provided an overall awareness of gun violence and the consequences – the lost lives of children who were just trying to go to school – of not taking protective action the moment it is called for.

“A lot of people that are against protesting view is as something full of aggression and violence, when most of the time, that’s not the case,” Adams said.

Protesting pushes modern society to keep thinking and debating about new things. It brings up issues that we need to solve to better the situations of everyone who requires it. In these forms, it is effective. If not for protesting and misalignment amongst people in the world, would anyone ever have the drive to keep going?

It is not just societies or countries that are influenced, it is the individuals who change, too.

“Politics has shaped who I am because it’s made me a lot more open to certains things I wouldn’t have considered before, such as accepting different groups of people whose struggles I didn’t really understand before I got into politics,” CHS sophomore Jordyn Morris said.

There is no doubt people will continue to protest about things they believe need to change.

Whether it be a disturbance in politics such as the Montgomery Bus Boycott in 1955 or a societal conversion like the Suffrage Movement in 1848, protests do something. We need to acknowledge that sometimes chanting and holding up signs is the only way to get the government’s attention.

Instead of refusing to participate in protests because we believe they will not do much, we should stop limiting ourselves before we even take steps to try and put our voice out there.

Amongst the provinces of South Africa, KwaZulu-Natal is recorded with the highest number of violent protests while the Free State has the lowest number. Public protests have grown more violent over the past five years, causing police to look past other serious crimes.

In theory, protesting or demonstration is a good idea. It is protected by the Constitution and can incite change, but reality is different from theory. In reality, protesting is not a good idea to further a cause.

It is nearly impossible to control a protest because of the sheer amount of people with free wills of their own. Demonstrations are getting passionate people together in a crowd which can cause mob mentality and outrage.

There is the chance the protest can become violent. This makes the cause seem like it is a hate group and nobody enjoys supporting those. On the slight chance the protest works, it will most likely go unnoticed. Many media companies feed off anything interesting and people walking successfully is not newsworthy. Several things can go wrong and several things have gone wrong which hurt the causes of both the right-wing and left-wing side in American politics.

The first example came when an alt-right protest was met with a counter protest by Antifa. It is unclear which side started the fight but an Antifa member who was a victim of the protest says the attack was unprovoked from the alt-right side.

The victim, Louise Rosealma, spoke out about what happened to her at the protest and the violence she had suffered. This caused Antifa to gain support because of how they were attacked.

With both these groups being unpopular, it is surprising to see how whenever something turns violent it has the opposite of the intended effect. Likewise, if the protest had gone the other way, the alt-right would have gained support, which, like Antifa, is also a hate group.

The second example deals with the left movement when a cop was let off for shooting an unarmed black man. The issue was that the officer had shot someone he thought was reaching for a gun. The gun was found but only the officer’s DNA was found. This caused theories of the gun being planted.

Black Lives Matter had gathered outside the courthouse and marched downtown to the mayor’s house. The mob began to throw rocks at the residential building. The group was able to block the highway and injure four cops, one who was hospitalized with a hand injury. The protesters attacked the cops with water bottles and broke a squad car’s windows.

After this event, Black Lives Matter lost a lot of support from both sides because of how it attacked the mayor even though he had nothing to do with the trial. Some do not agree with Black Lives Matter’s methods.

With these groups, the public’s opinion is so decisive that every time something violent happens with the groups name attached, the group is seen more and more as a hate group or the enemy. When you can not control a group of people it is not a smart idea to get them to speak about something they are extremely passionate about.

With protesting being such a popular method of expressing the group’s opinion, the public’s view of groups is constantly shifting, causing a general sense of distrust. This causes people unsure of what cause to follow because it seems like everyone is evil today. Protesting hurts the cause if it turns violent, but what if it does not go wrong?

According to Crowd Counting Consortium, which tracks every protest, more than 8,700 protests happened in the United States last year. How many were remembered? What change did these cause? Also according to the CCC, 74 percent were against President Trump. Yet Trump is still president. Around 8,010,000 people spoke against Trump and he was still elected.

But for example, on Aug. 14, Antifa attacked a peaceful free speech rally in Boston. The protest was peaceful and there was only a few dozen alt-right. Antifa began to harass the press. This caused them to be vilified on the news for being a hate group. This caused Antifa to lose 300 Twitter followers.

These examples show that protesting will most likely make people hate the group more or go unnoticed. There are other ways to spread an opinion than marching through a city destroying property. Other more peaceful methods could include registering to vote or calling your local representatives.

People don’t realize how important voting is. During the 2016 Presidential Election, 58 percent of registered voters voted. While this is more than other elections have had, it is still a little more than half the registered voters. If everyone was to share their opinion and vote then we could have more fair elections. Do not slack and then be upset about the consequences. Emailing your representatives is a better method because it is more direct and personal than a protest.