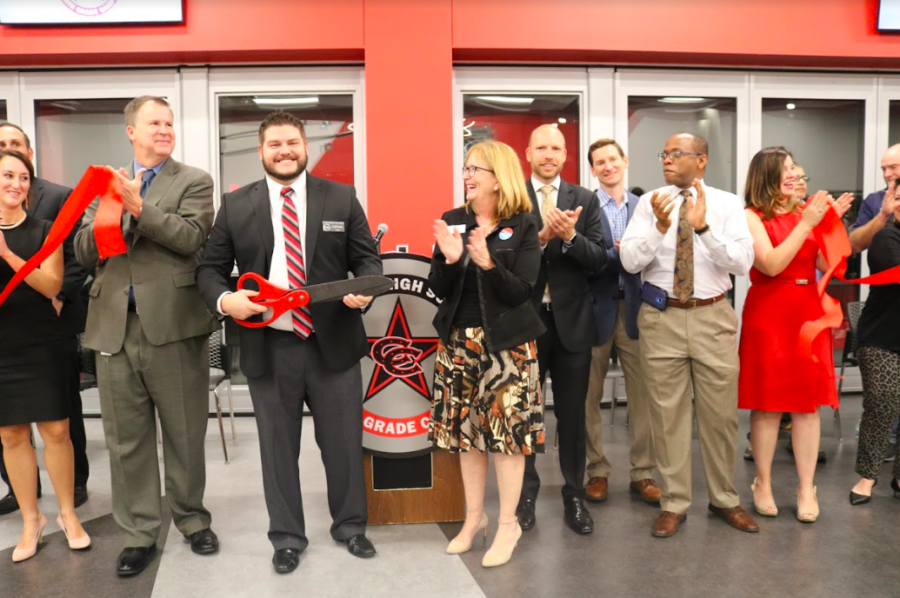 CHS9 Principal Cody Koontz cuts the red ribbon with Coppell ISD Superintendent Brad Hunt and other Board of Trustees members to signify the opening of the Coppell High School ninth grade campus. This new ninth grade center was a result of a remodeling of the former Coppell Middle School West.

Since the announcement of a new high school campus two years ago, the spotlight has been put on CHS9. The campus focuses on ninth graders and providing a secure environment for them, away from the upperclassmen.

At CHS9’s official grand opening on Wednesday night, it was evident why and who is was for.

“I hope that they got a little bit of sense of what it feels like to be here, you know we work really hard,” CHS Principal Cody Koontz said. “Just our culture, we’re trying to create an opportunity for our ninth graders coming from all different places.”

The night featured the choir, band, cheerleaders and Lariettes standing alongside campus administrators and Coppell ISD Board of Trustees to welcome visitors and give them a taste of the campus. Furthermore, there were speeches made by Koontz, Board of Trustees President Tracy Fisher and September student of the month Mihir Chaudhari.

“Just to see the choir members singing, to hear the band playing, to see the drill team and the cheerleaders, the young man that spoke,” CISD Superintendent Brad Hunt said. “That’s really motivating for all of us to make sure that our young people are involved and a part of it all.”

Although the campus has been open since August, it has not been officially open to visitors such as parents or the public eye. The campus underwent many changes over the summer so it could transition from the former Coppell Middle School West to CHS9.

In addition, the opportunity provides for people to come together and enjoy the progression of CISD.

“Mr. and Mrs. Lee – Lee Elementary School is named after them –  came back and I was just talking to a former student, who was here when I was an assistant principal here in the 90s’,” Hunt said, “There really was an opportunity for the staff to celebrate their successes and have a little bit of fun, but really for the community to come and see it and tour it.”

Parents and students are pleased with the renovations that the school went through which makes the campus very advanced and modern.

“I didn’t expect the campus to be so high tech,” CHS9 parent Gretchen Strauss said. “It’s a beautiful facility. I love the whole concept of blocked lunch and I love all of the different places that kids can go to study and I just love the family feeling here. I’m just really impressed with it.”