One step at a time: Osbornes combat Crohn’s through upcoming school walk 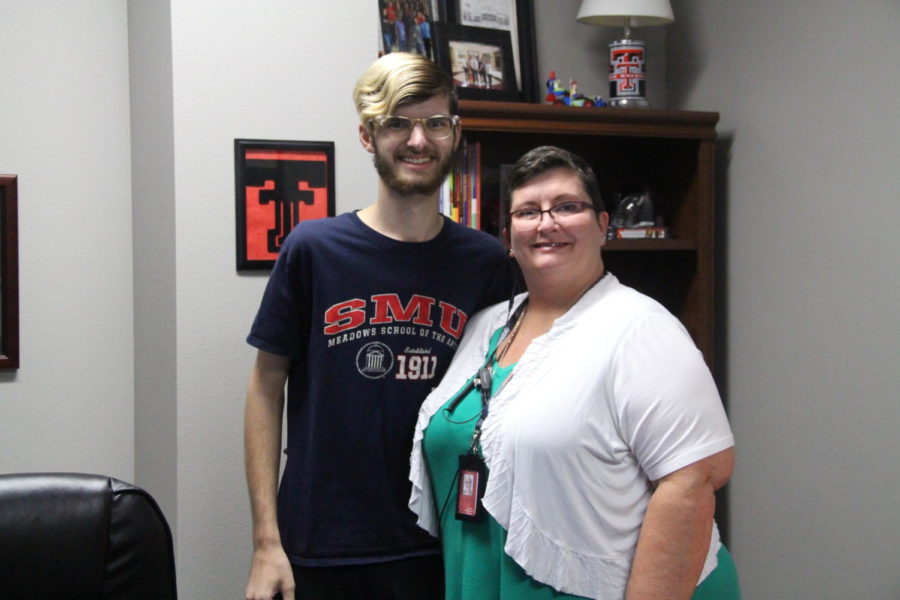 Coppell High School assistant principal Cindi Osborne with son Ryne Osborne, who has Crohn’s disease, a rare illness that affects the digestive tract, in her office in Student Services South during eighth period on Sept. 12. A CHS team to participate in the Crohn’s and Colitis Fort Worth Takes Steps walk has been organized by Instructional Coach Derryl Lee to raise money and awareness for the illness. The walk will be held on Sept. 29 in Trinity Park in Fort Worth.

After staying in the hospital during August with her son Ryne Osborne, who has been diagnosed with a rare illness, Coppell High School assistant principal Cindi Osborne returned to CHS in September with the warmest welcome: a walk.

The Osborne’s lives took a turn when 19-year-old Ryne was diagnosed with Crohn’s disease in February 2017. In just his freshman year of college at Southern Methodist University, Ryne has battled his illness with the support from friends, SMU faculty, CHS staff and family but most importantly, his mother.

“Anytime you see your child like this, it’s hard because I want to fix it but I can’t fix it,” Ms. Osborne said. “You figure out who your friends, support systems and blessings are out of this.”

Less than 200,000 cases per year, Crohn’s affects the lining of the digestive system. Ryne has undergone multiple surgeries, including ileostomy, an intensive bowel surgery.

The disease being so rare, Ryne remembers instances in the hospital where he would informally train his own nurses during various shifts the procedures of his treatment.

“Almost all the nurses, besides those who had dealt with [Crohn’s] and have talked with my surgeon, had no idea how to [treat me],” Ryne said.

Although Ryne has had several hospital stays the past year, he handles his situation with acceptance and maturity. The recovery process has been slow, but Ryne’s condition has been improving step by step everyday of his routine.

“I’ve been amazed by his resilience and his attitude,” Ms. Osborne said.

A music major and member of the Meadows Wind Ensemble and Meadows Symphony Orchestra at SMU, Ryne plays more than eight instruments, including the bassoon, flute and piano. He finds personal strength through his passion of music in his journey. Despite not being in a healthy condition, Ryne still manages to play some of his instruments to pass time.

“My mind is constantly running through music,” Ryne said. “It wasnt until all of this hit till I realized [music] was apparent. The second I had a musical instrument in hand again, you could see I was instantly happier.”

Upon hearing the unfortunate news, a friend of Ms. Osborne decided to step in. CHS instructional coach Derryl Lee has taken his concern into action by forming a CHS team named “CHS Walks the Walk” for the Fort Worth Take Steps for Crohn’s and Colitis walk.

“I really wanted to find a way to help in a bigger way,” Lee said. “I hope to make myself more aware that Crohn’s and Colitis is something people that people struggle with and I just wanted to give back.”

The fundraiser aims to raise awareness of the illness and reach a total goal of $1,500 and has reached a little more than $800.

School groups on campus, such as the Coppell Lariettes, have been contacted in hopes of participation.

“If there’s a cause or foundation that maybe we have a personal connection to, [The Coppell Lariettes] try to figure where we can move forward,” Coppell Lariettes director Diane Craig said. “When you give back, your heart become full. It helps you not focus on your own problems when you help others.”

Other school groups have not been confirmed to attend, but are encouraged to.

Following a tough year filled with hospital trips, the Osbornes are overwhelmed by the amount of genuine support and love reached out to them upon their return home.

“I really do appreciate the support, if you’ve never met anybody that’s dealing with it or who has the disease, you know virtually nothing about it,” Ryne said. “I just really like the knowledge that this exists.”

The “Take Steps” walk will be held in Trinity Park in Fort Worth on Sept. 29. Those in the CHS community are welcome to attend in support of the Osborne family.