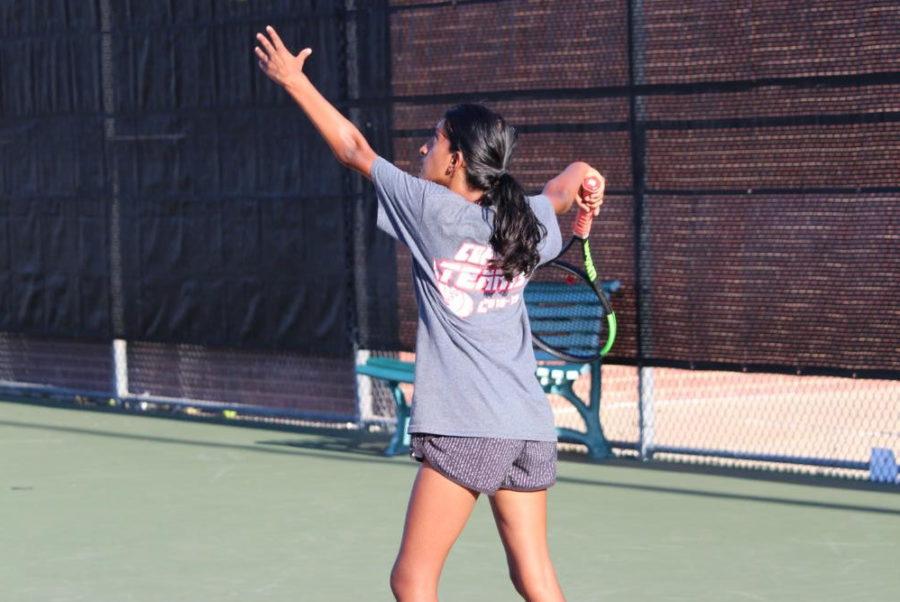 Yesterday on its home courts, the Coppell varsity tennis team opened its District 6-6A season with a 19-0 win against MacArthur, but what stands out most to Coppell coach Rich Foster is his players’ lack of arrogance during the game.

“They did a good job of competing with intensity and with class,” Foster said, “I don’t mean this as a put down, but we were clearly a stronger team. Sometimes when people who are better players play players who are not quite as good, they can get a little cocky. But while our players beat them as soundly as they could, they still treated them with dignity and class. We walked away beating the team and the team respecting us.”

All the players warmed up for however long best suited them, and then started their doubles matches. Girls partners junior Aishwarya Kannan and sophomore Rishita Uppuluri won, 8-4; juniors Ruchika Khowala and Rifhat Sindhi, 8-0; Abhirami Krishnamurthy and senior Nisha Ramesh, 8-1. On the boys side, junior Mihiro Suzuki and Andreja Zrnic won their match, 8-4; Clark Parlier and sophomore Matthew Abbey, 8-0; sophomores Kosta Zrnic and Kunal Seetha, 8-0 as well.

Although the players took their matches seriously, they did not hesitate to lighten the mood with a few jokes, either.

“Once my doubles partner hit me in the back, and it was really funny,” CHS junior captain Suzuka Nishino said. “It kind of eased the tension a little bit.”

Certain players are known on the team for their unique playing techniques, such as Uppuluri for her backhand slice, a sharp backhand she used several times throughout her matches.

After doubles wrapped up, the players moved into singles. Coppell won most of its singles matches 6-0 or 6-1, and the closest singles match was 6-3. Nishino was one of the girls who won her singles match 6-0, but no one would have guessed if they were not watching.

“[Suzuka is] one of the kindest people I know,” Foster said. “The other girl didn’t score a single game on her, but they were smiling and talking, and I think the girl left the court not feeling beaten down. Suzuka has a way of treating people with respect and making them feel liked and cared about, even when she’s playing very intensely.”

Once the tournament concluded, both schools’ teams arranged themselves into two different lines, and each player walked down the line clapping the opposing teams’ players’ hands while saying “good game”, “good job” or something similar — an act of sportsmanship and respect.

One of the team’s goals is winning district, and their strong win yesterday was a positive step in that direction. They will play Hebron next Tuesday, and are expecting it to be a challenge.

“Hebron will have a solid team, and their place is always a tough place to play,” Foster said. “Their courts are really spread out, and they support their team well. So that will be our next real test.”