‘Sweetener’ review: Grande’s fourth album is anything but bland 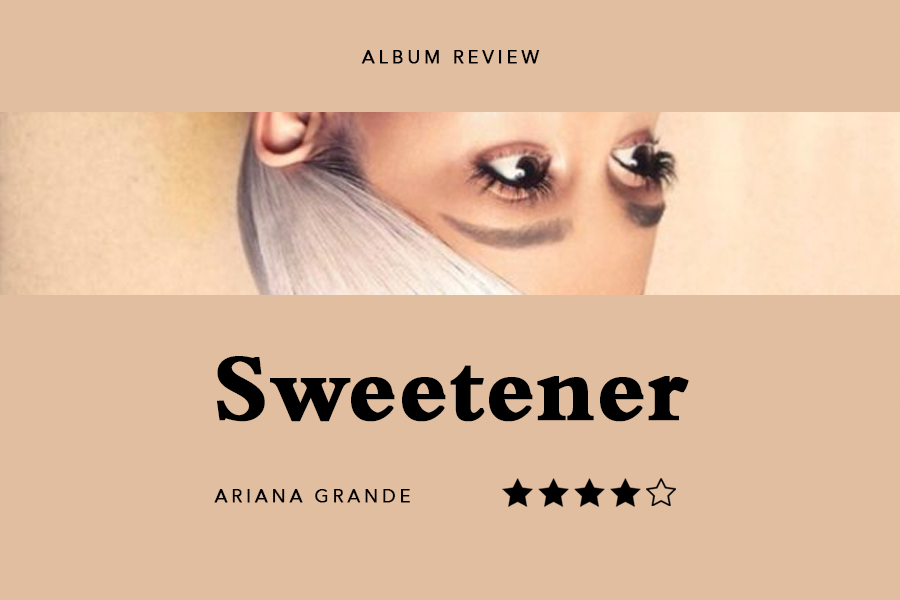 Ariana Grande released her fourth studio album, Sweetener, on Friday. Sweetener is Grande’s first major music release since the terrorist bombing that took place at the Manchester show of her Dangerous Woman tour on May 22, 2017.

“It’s kind of about bringing light to a situation or to someone’s life, or somebody else who brings light to your life or sweetening the situation,” Ariana Grande told Jimmy Fallon in May, after revealing the title of her fourth studio album to be Sweetener.

The title felt appropriate; with the announcement coming a little less than a year after the events of the Manchester Arena bombing, it seemed everybody, especially Grande herself, could use a little sweetener.

The album dropped on Friday. As a whole, it reflects a departure from the grand, radio-friendly jams Grande is known for. In their place are colorful, intricately produced pop, trap and R&B fusions that proclaim messages of love and hope.

That is not to say there are not some callbacks to Grande’s past hits, however: lead single “No Tears Left To Cry” is a soaring dance-pop number with elements of disco, while “Breathin” recalls the ‘80s synthpop euphoria of Grande’s previous songs “Love Me Harder” and “Touch It.”

Sweetener opens with “Raindrops”, a beautiful 30-second a capella cover of The Four Seasons’ “An Angel Cried”. Later, Grande showcases even more of her vocal abilities on “Goodnight n Go”, a semi-cover of the 2006 Imogen Heap song of the same name. She even name-checks her soon-to-be spouse on the starry-eyed interlude “Pete Davidson”. These tracks build a mature, atmospheric quality throughout Sweetener and are some of the most captivating on the album.

Sweetener is particularly impressive because it takes many risks production-wise. While some of the songs on the album do end up stumbling under their aggressive aspirations at times—“The Light is Coming” becomes quickly grating and repetitive, despite a great guest verse from Nicki Minaj; the production on “Borderline” sounds dated and Missy Elliot’s appearance seems phoned in—when the risks do pay off, they make some of Grande’s best and most unique songs to date.

For instance, Sweetener culminates in the sugary sweet title track, the chorus of which sounds like a lullaby—“When life deals us cards, make everything taste like it is salt, then you come through like the sweetener you are to bring the bitterness to a halt,” she sings, before launching into one of the catchiest hooks on the album. The verses are groovy and quirky, and the lyrics perfectly encapsulate the theme of the album. Another instant album highlight is “R.E.M”, a dreamy and bouncy ode to true love, which Grande sings beautifully in her lower register. Both are incredibly nontraditional sounding songs that, for Grande, sound completely comfortable.

The 15-song album comes to a close with “Get Well Soon,” written about anxiety and mental health, in which Grande’s vocals are layered to create an otherworldly blend of sounds. At the end of the song is a 40-second moment of silence, a touching tribute to the victims of Manchester. The fact that this brings the length of the song to 5:22, and the Manchester Arena bombing took place on May 22, 2017, makes for an even more emotionally resounding conclusion.

For fans of 2016’s Dangerous Woman, Sweetener may not be the pop confection they are looking for; it is less immediate and radio-friendly, but this causes the album to only become more enjoyable and cohesive with each listen. And while lyrics are not exactly this album’s strong suit, they get their point across well enough.

Altogether, Sweetener is the realized vision of an artist deeply affected by tragedy, looking to fight hate with love.