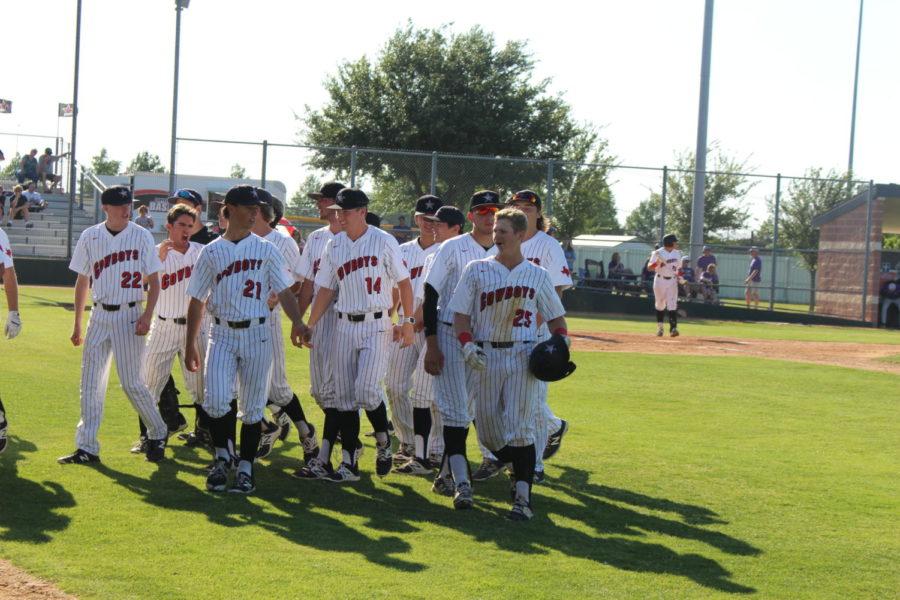 The Coppell baseball team congratulates junior first baseman Nick Vernars after his home run in the bottom of the sixth inning of Friday’s 6-5 loss to Montgomery. The Cowboys season ended on Saturday when Montgomery defeated Coppell, 4-3, to clinch the best-of-3 Class 6A Region I area series.

In the seventh inning of Friday evening’s second baseball game against the Montgomery Bears at the Coppell ISD Baseball/Softball Complex,  the Cowboys began to rally from a three run deficit. Coppell senior left fielder Anthony Villalobos led off with a well-hit home run amd junior center fielder Blake Jackson stepped into the box.

After watching two pitches, Jackson blasted his fourth home run of the day and second of the game over the left field fence.

Jackson’s home run, however, was Coppell’s last hit of the game as Montgomery extended the series with a 6-5 victory. This sent the best-of-3 Class 6A Region I area playoff series to Montgomery for a decisive Game 3 on Saturday.

Coppell’s dream of a state title ended with a 4-3 loss in eight innings on Saturday. The Cowboys end the season 30-6-1.

On Friday, Coppell defeated Montgomery 3-1, to enter Game 2 with a chance to sweep the series. Unfortunately for the Cowboys, their rally came up short.

“We really just need to work on the little things,” said Jackson after Game 2. “We gotta make the routine plays and fixing the mistakes.”

The Cowboys got a few hits early on in Game 2, but the bats didn’t bring in any runs until the fifth. Junior right fielder Dylan Nichols led off the inning and walked. Later in the inning, Jackson scored Nichols on Coppell’s first home run of the game.

Although the tides began to turn late in the game, three solo home runs and Jackson’s two run homer were not quite enough to bring the game back.

“Nick [Vernars]  went yard and that just really lit a spark for us,” Jackson said. “We had lots of chances before that though and we just didn’t jump on it early enough.”

A half hour prior to the second game against Montgomery, Coppell beat the Bears 3-1 thanks to a solo and a two run home run, both hit by Jackson. Because the series was tied 1-1, Coppell and Montgomery both made the trip to the Houston area to break the tie.

Going into the seventh inning of Game 3, the Bears tied the game 2-2. After going into extra innings, however, Montgomery came out on top, securing a 4-3 victory over the Cowboys.