Cowboys double down on Tigers, earns ticket to Georgetown 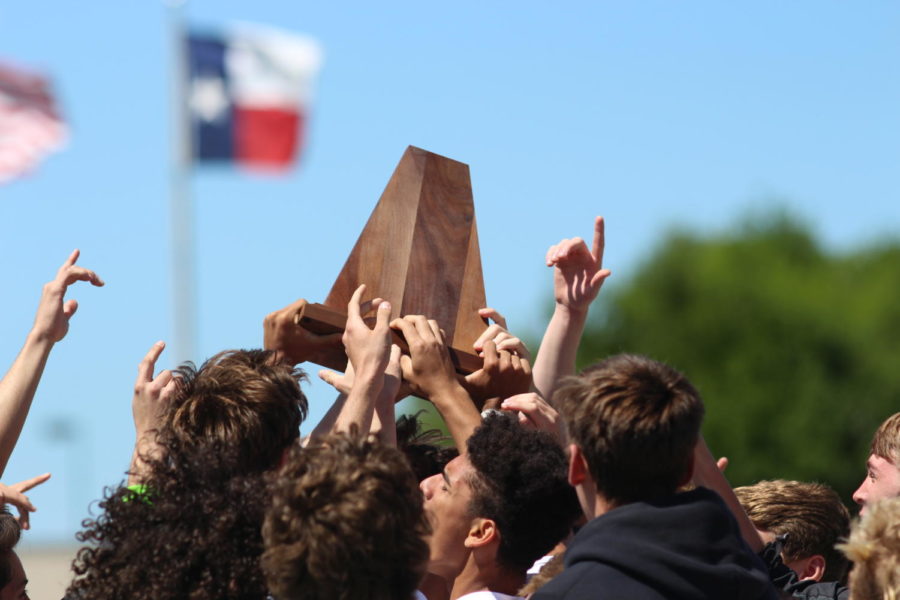 Coppell Cowboys players celebrate after winning the Region II 6A Soccer Tournament against the Conroe Tigers on April 14 at Kelly Reeves Athletic Complex in Round Rock. The Cowboys advanced to state after defeating the Tigers 1- 0. Photo by Karis Thomas

ROUND ROCK – For the Coppell boys soccer team, late goals and low-scoring games seem to be a pattern. With a goal in double overtime by junior midfielder Jeremy Basso in the Class Region II semifinals and a corner-kick goal late in the regional championship by senior forward Marshall Board, the Cowboys advance to the state semifinals.

Coppell plays San Antonio Reagan at 7:30 p.m. in the Georgetown Birkelbach Stadium in the Class 6A semifinals. Tickets will be sold for $7 for students and $12 for adults. Full-tournament tickets will also be sold for $30.

The Cowboys opened the regional tournament last Friday with a 1-0 win over Spring Woods and soon finished it off with another 1-0 win against Conroe and a Class 6A Region II championship on Saturday.

“We knew for both games, set pieces would be key – corner kicks and throw-ins – and it ended up really helping us out,” Coppell coach James Balcom said.

For the Cowboys, set pieces helped them out in more match than just one. In the regional finals, senior midfielder Marshall Board demonstrated a bit of skill by curving in a corner kick in the 71st minute.

While Basso and Board got the glory of the goals, winning a match – a regional championship – is not a one-man job. In each match, every Cowboy player would be seen standing up, sometimes on the bench, and cheering for their teammates. This happened enough for the line judge referee to come their way more than once to settle the Cowboys down.

“The energy that the team creates is huge. It makes them feel like they’re right there in it. When the players on the field look over and see them standing and cheering and celebrating with them, it’s all one team,” Balcom said.

After a wholesome team dinner Thursday night at Olive Garden, the Cowboys were hyped up and ready to hit the field on Friday against Spring Woods. However, the Spring Woods was ready as well. As the match went on, although aggressively attacking, both teams’ defense proved evenly matched. Throughout the 80 minutes of regulation, neither team was able to score.

Basso’s goal in the 94th minute of play came as a relief to some Coppell fans, yet an inevitable outcome to others. Despite what the scoreboard said, the Cowboys dominated the offensive front. Between regulation and overtime, Coppell put up 24 shots, while Spring Woods had just six.

“We generated a couple opportunities early on,” Balcom said. “We could have put them away early… but the team kept playing with confidence. Unfortunately, it had to happen in the last minutes of [overtime], but I’m not going to complain about the outcome.”

The goal came from a corner kick by senior forward Juan Pablo Rodriguez, who sent it high and lofty into the middle of the field. Basso, being the tallest one on the field, was able to jump up and direct the ball straight into the crossbar of the goal and then across the goal line.

With this goal, followed by a few minutes of defense, the Cowboys would move on to the Region II finals the next day against Conroe.

While it might be tempting for the Cowboys to sit back and pop open sparkling cider – as they did after the Conroe win – it is not the end yet. There is still a state championship to be played.

“At this point, throughout the week, there’s not much to work on with the boys,” Balcom said. “We’ll take it easy and keep everybody loose to be ready for next week.”