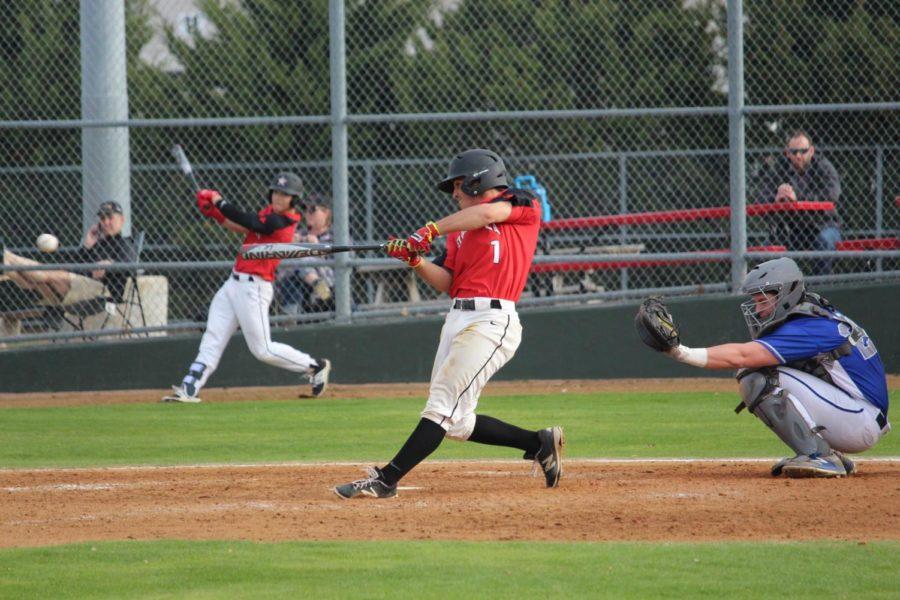 Coppell High School senior Anthony Villalobos swings at the ball during second inning of Thursday night’s game at the Coppell ISD Baseball/Softball Complex against the Georgetown Eagles. Coppell defeated the Eagles 4-3 due to time limit during the 7th inning for the six-game tournament.

After a nine-run rally in the third inning, the Coppell baseball team walked off the field at the end of the game victoriously with a 13-1 win over Denton Guyer in the books at Cowboy Field.

The Cowboys played the Wildcats on Friday as a part of a weekend tournament.

In the bottom of the third, the Cowboys brought their bats out and did not put them away until nearly 20 minutes later. The inning started off with a line-drive triple to right by junior pitcher Nick Vernars, who was replaced by junior Dylan Nichols as a courtesy runner. Nichols was later driven in on another triple by Minjares to give the Cowboys a 4-1 lead.

Coppell later kicked it into high gear with a two-out rally. After seven consecutive hits, including doubles by senior second baseman Josh Bartolacci, junior center fielder Blake Jackson and Minjares, the Cowboys left the third with a 12-1 lead.

The ballgame started off with Vernars on the mound, who sent the Cowboys to the batter’s box with a one-two-three inning.

“I know that I can just pitch when I’m out there. It feels good that with a team like this, I don’t have to worry about too many errors or anything in the field,” Vernars said.

In 67 pitches in five innings, Vernars threw four strikeouts and one walk, while only giving up one hit.

However, Coppell’s lineup goes deeper than the bullpen. Senior left fielder Anthony Villalobos led off the Cowboys with a line-drive triple to center field. The Cowboys got their first runs on the board with a double by sophomore catcher Hudson Polk, driving in two runs. With a two-out single by senior Adrian Minjares, Vernars was driven to give Coppell its 3-0 lead at the end of the first.

In the second, the Cowboys shut out the Wildcats with another three up-three down inning. However, Guyer was able to return the favor in the bottom of the second.

The third inning was when things really began to pick up. In the top of the third, Guyer got its first and only run on the board with a single by junior pitcher Josh Crabtree, who was later driven in by junior third baseman Daniel Thompson.

The ballgame came to a close after Coppell scored one in the bottom of the fourth, followed by another shutout inning by Vernars. The 10-run rule was then put in place, preemptively ending the game at 13-1 in four and a half innings.

“My hitters were really starting to identify pitches,” Coppell coach Kendall Clark said. “That really helps to get going with a long run of good hitting like we had in the third.”

Friday’s win came after a strong start to the weekend- tournament in which the Cowboys played. The tournament began with a win against Flower Mound on March 8, then another win over Georgetown later that day. On Sunday, the Cowboys tied the Eagles at Prosper, then beat Sachse, 11-0.

Cowboys take pitcher’s duel against Georgetown
In a game with solid pitching throughout, the Coppell baseball team beat Georgetown, 4-3, in Coppell’s second game of the day Thursday at Cowboy Field.

Georgetown scored a run with a single and a double in the third inning, to which Coppell responded by scoring two runs with two singles and a triple from junior infielder Nick Vernars. At the end of the inning, Coppell was ahead 4-2.

During the sixth inning, Georgetown got closer with a single, a stolen base and another single, making the score, 4-3.

In the first inning, Georgetown received two walks, a single, a double, two stolen bases and a batter was hit by the pitcher. In other innings, the visitors’ base runners kept stealing bases as well as hitting singles. The Eagles took advantage of this by scoring their three runs.

In the second inning, things began to change for the local team. Coppell scored its first two runs with a double by junior infielder Kalen Clark. Junior infielder Porter Hardcastle took control of the hill, including striking out one of their batters; this would be a first of nine strikeouts throughout the game.

“Today we did pretty good, we all worked together,” Hardcastle said. “There were a few mistakes, but we came back and battled back.”

In the seventh inning, junior outfielder Blake Jackson stepped up to the pitcher’s mound to relieve Hardcastle. Jackson only pitched for one inning as the game ended in the seventh due to the 2-hr time limit.

The Cowboys finished their weekend tournament, 4-1-1, going into Monday’s game at Prosper High School against the Eagles.