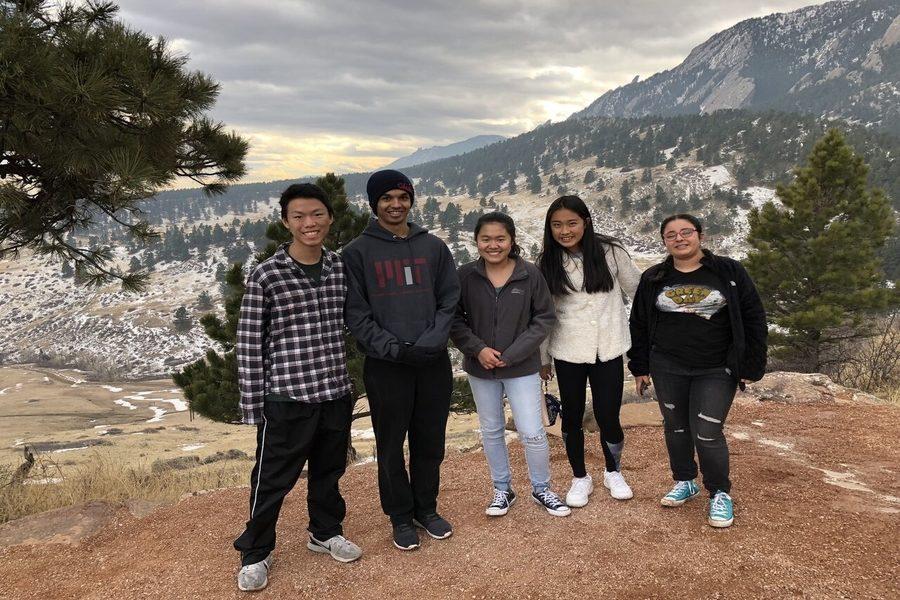 The Coppell High School Got Passion for Science Club goes on a hike while in Colorado from Feb. 2-4. The team traveled to Boulder, Colo. to compete in the National Oceans Sciences Bowl which was moved from Galveston due to Hurricane Harvey.

Every Wednesday, the Coppell High School Got Passion for Science Club (GPS) studies all about the ocean in preparation for the annual National Oceans Sciences Bowl in Galveston.

However, when the bowl was moved to Boulder, Colo. due to Hurricane Harvey and the team was drawn out of a hat as one of the four Texas teams to compete, the students were ecstatic.

With resources and manpower being directed towards the aftermath of Hurricane Harvey, the bowl was originally cancelled. When it was moved to Colorado, only a select few teams in Texas could go, leaving the decision up to chance.

“When I originally told them it was cancelled and [had] to see there little sad faces, I was just heart crushed,” GPS club sponsor Laronna Doggett said. “We missed a good chunk of the year practicing because we didn’t know. Then we really kicked it up a notch.”

The GPS club began as a more general science club. However, after learning about this competition in 2012, Doggett began to shift its focus towards ocean science in an effort to get students involved.

The National Oceans Sciences Bowl consisted of 18 teams competing against one another using a buzzer system, with the questions getting increasingly harder as they progressed. This year’s theme focused on how the ocean affects the climate.

Because there are only so many people at CHS for the students to train with, attending this competition provided these students with an outlet to share their interests and get a real life idea of what competing is like.

“Being a part GPS gives me a new perspective on aquatic sciences,” Koppikar said. “I’ve always wanted to focus on microbiology or something like that, but doing this shows me there is a different side to oceanography and aquatic science I hadn’t seen before.”

Although results have not been released yet, the team knows they placed first amongst the Texas teams, since all the other Texas teams were eliminated prior to them, and estimates they got sixth or seventh overall.

“A lot of pieces fell in the right place for this trip to happen,” Koppikar said. “Being best out of the Texas teams is by itself an accomplishment.”

Regardless of rank, the team took advantage of the bowl’s relocation, driving up on Feb. 1 and getting the weekend to not only compete but sightsee.

“We had all day Friday to go play, and when I say play, I mean go do fun sciencey things,” Doggett said.  “We went to a couple museums, we went on hikes, saw snow. They really became a little family, plus we were in the car for 25 hours too, so that helps.

The team utilized their time in Colorado, visiting places that they would not get to see otherwise.

“We stopped at the Cadillac Ranch in Amarillo, and [visited] the National Atmospheric Research Museum,” Doggett said. “It was just fun to be with them outside of school and have these experiences we don’t normally have.” 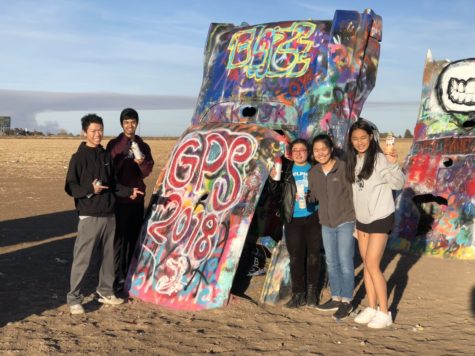 Photo courtesy Laronna Doggett The Coppell High School Got Passion for Science Club visits the Cadillac Ranch in Amarillo, Texas on their drive up to Boulder, Colo. on Feb 1. The team traveled to Colorado to compete in the National Oceans Sciences Bowl which was moved from Galveston due to Hurricane Harvey.

The many hours spent preparing, traveling and competing in the bowl made the team closer than ever.

“I learned a lot of things, especially spending time in a car for that long,” Nishino said. “Some of those people I didn’t know well before, but we got to bond as a team on the trip which was a great experience.”

All five students plan on continuing to stay in the GPS club and competing in the National Ocean Sciences Bowl next year. Despite moving to the Coppell High School Ninth Grade Campus, Doggett has agreed to be there advisor again.

“We will find a way for me to be there,” Doggett said. “I don’t have answers on how to do that yet, but I’ve told them ‘I will do this one more year, so y’all can finish out your senior year. I can come to the high school, maybe we can figure out a way to Skype during longer lunches, we’ll make it work.’”