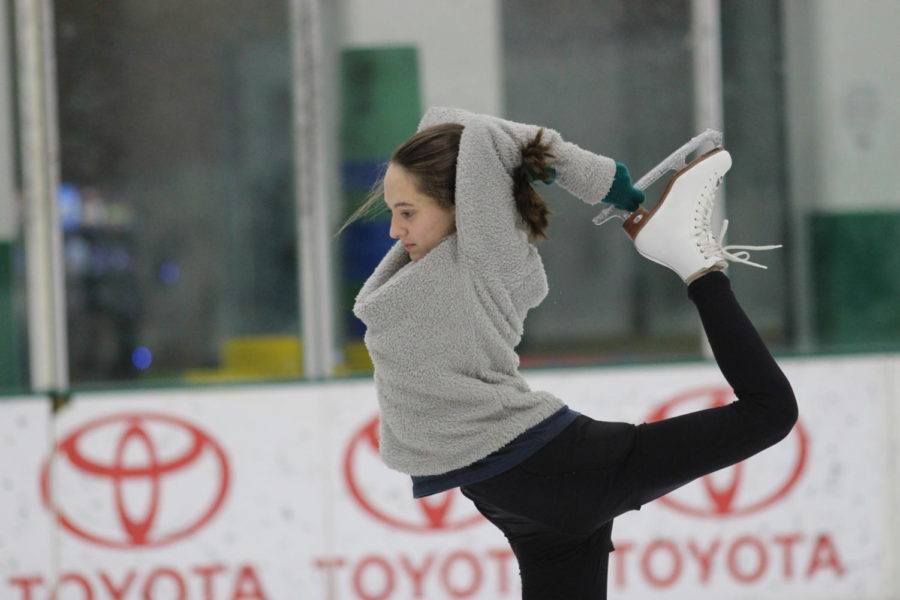 Coppell High School sophomore figure skater Kate Strong grabs a hold of the blade of her skate as she practices the biellmann pose during figure skating practice on Feb. 2 at the Dr. Pepper Star Center in Farmers Branch. Strong has been figure skating since she was eight years old and is also a CHS Lariette.

While practicing the arching Biellmann spin, Coppell High School sophomore Kate Strong grasps the blade of one figure skate behind her head as she finds balance on the thin blade of her other skate. This graceful movement symbolizes her life as an athlete as she works to maintain balance between two interrelated activities: figure skating and Lariettes.

Though she began dancing four years after figure skating, today both pursuits are prominent aspects of her life. Her participation in each activity helps her improve in the other through their similar movements as well as the grace and strength incorporated into both.

“They’re really connected,” Strong said. “Figure skating [requires] a lot of strength because you have to have a lot of strength to jump and hold things tight so it has helped me a lot in dance to be tight and look good.”

Strong took up figure skating when she was 7 after her mother suggested she try it. During middle school at CMS West, she stopped figure skating and began doing gymnastics. However, she quickly grew tired of the sport and was drawn back to skating because it was an activity she felt more comfortable in.

Strong currently skates for the Ice Skating Institute at the Dr Pepper StarCenter in Farmers Branch. She is considering joining the more competitive Dallas Figure Skating Club in order to take her skating career to a higher level.

Among the many aspects she enjoys about the sport, she likes the way she is able to work individually and control the way she practices. Additionally, she loves the feeling of being by herself on the ice as she performs.

“It’s kind of peaceful and you feel like you can do anything,” Strong said.

Apart from being her passion, figure skating has helped her succeed in Lariettes at school. Both activities emphasize skills that complement each other, allowing Strong to improve in both at once.

According to CHS Lariettes director Julie Stralow, one aspect of dance in which Strong’s background in figure skating shows through is the strength she demonstrates when performing certain moves.

“Every time we’ve done something that takes some power or some finesse, we see her technique and her power moments that are breathtaking,” Stralow said.

Stralow attributes Strong’s ability to excel at these power moments to her experience with jumps in figure skating. Her typical figure skating practices begin with a warm up which includes practicing various spins and jumps.

Dance at school has also helped her improve as a skater. Spins in dance allowed Strong to master the backspin in figure skating because of the similar motions involved.

“Her spins have improved a lot because she has a lot of turns in her dancing and of course balance, coordination, her rhythm, timing and overall performance too [have improved],” Strong’s figure skating coach Aliyse Stevens said.

As much as figure skating and dance relate, they each provide a different experience for Strong. One of the most notable differences between the activities is the people involved in each. Figure skating is highly individual. In fact, Strong has never had a teammate in the sport.

On the other hand, Lariettes is highly collaborative. Not only does the group of nearly 50 have to be synchronized, but dancers also have to help each other learn routines and movements.

Though the sports are different in the relationships formed within each one, for Strong one aspect is common to both: balance. Participating in both activities means she has to remember and perfect different choreography for each one. Additionally, it means having to communicate to each of her coaches about scheduling conflicts between the activities.

This balance will especially have to be pertinent within the next few months as the Lariettes are participating in several competitions in February and March. Additionally, Strong is participating in an annual skating event, “Love to Skate” at the end of this month. Fortunately, due to the interrelatedness of the activities, whether she is at a figure skating practice or a Lariette rehearsal, she will be able to simultaneously improve in both activities.