I was bullied because of my anxiety (with video)

My journey with mental illness 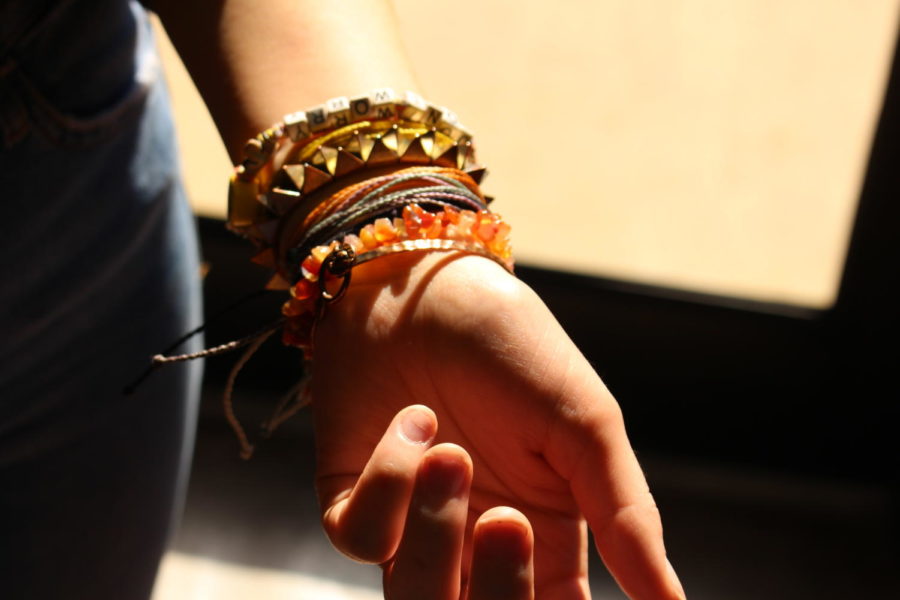 Sidekick editor-in-chief Amelia Vanyo began wearing bracelets to cover up self-harm scars in seventh grade. Now she wears them as a symbol of what she has overcome.

I used to self harm. It started in the seventh grade, shortly after I began taking medication for anxiety.

There was a girl in my seventh grade class who would check my wrists every day, making a show of how she was trying to help me.

She did not help me.

So I started wearing bracelets.

I have always had anxiety. Since the day I was born I was a jumpy, nervous kid.

Even when I was a baby it was obvious that something was different. Parents are encouraged to put babies to sleep on their backs to protect them against crib death. But if I slept on my back, when I woke up from nightmares I would start crying and screaming, but the support I got when I laid on my stomach would help keep me calm, and put me back to sleep.

I cannot remember the first time I had an anxiety attack, but I remember being very young when the sudden jolts of fear would run through my body without a moment’s notice. The tears would surface and my hands would clamp over my ears in terror.

I was diagnosed with general anxiety disorder in the second grade, shortly after developing such a fear over going to school that it would make me physically sick to my stomach.

There is nothing wrong with it either. I have a condition, but I am not flawed.

But for some reason, my anxiety provided the perfect opportunity for my peers to bully me.

I was bullied in sixth and seventh grade by both my peers and my teachers.

In the sixth grade, I was told by a teacher that the reason I was anxious was because I was not  religious enough.

In the sixth grade, two girls I went to school with made fun of me for my phobias.

In the seventh grade, girls would make fun of my anxiety, they would provoke me and try to get me to freak out.

In the seventh grade, I was left out, ignored, laughed at.

The teachers would not help – if anything they made it worse.

I often received texts from the girls in which they asked “why don’t you just stop worrying?” The messages on my phone would glare up at me, and my eyes would fill with tears.

Anxiety is not a choice. I do not wake up in the morning and think to myself “you know what? I want to have anxiety today.” I do not interrupt my day to have a panic attack on purpose, I do not choose to shut down in the middle of doing something. It is all out of my control.

I do not get bullied in the same way I used to be bullied. Now it is a lot more misunderstanding than outright hate. Sometimes people will say they are having a panic attack when they are not. That is always upsetting. I made a point of not misusing the vocabulary of mental illness here.

I never got an apology from anyone who bullied me. But in some ways I do not mind. An apology only helps so much – what would really make a difference would be if those people changed and, instead of attacking people who are different, did what they could to be empathetic and helpful.

How anxiety has helped me

The thing is, I am not ashamed of my condition anymore. In fact, there are instances in which I am almost thankful for it.

My anxiety has taught me a lot about about being a better person and how to get through hard times.

Because of what I have been through, I know how to be empathetic to other people. I do not get offended when someone is not in the mood to chat because they are having a bad day. I am never quick to judge – I know that everyone goes through things.

And because I appreciate the people who were there for me when I needed it, I am good at being there for others when they ask for help – but I am  also good at standing back when they want some space.

I am a lot stronger now than I was in the sixth grade. I have been through a lot, I have had tons of  really bad days, so I really appreciate the good days. But I also know I am capable of getting through difficult times.

I know how to handle fear. While I may be one of the most nervous kids I know, and while I create a lot of my fears out of thin air, if something really truly real and terrifying comes my way, I will know how to act with a bit of courage and logic. Someone who has never experienced true terror may not be able to act with as much confidence as I could.

Now that I have forgiven myself for being angry at those who do not understand, I am determined to make a difference, determined to teach, determined to inform people. I did not choose my anxiety, it is a condition I cannot control, and it is something everyone should have compassion for.