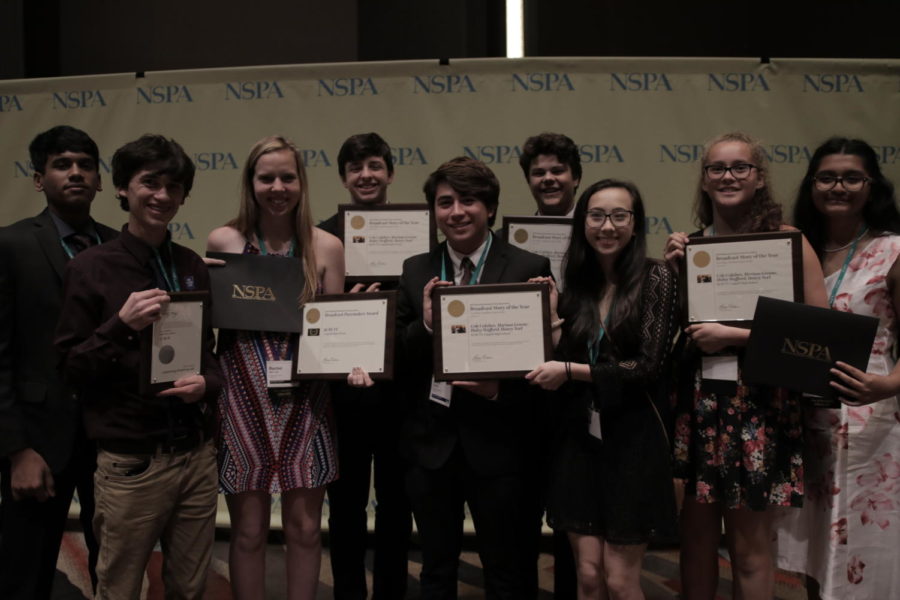 The last day of the 2017 JEA/NSPA Fall National High School Journalism Convention at the Hyatt Regency in Dallas provided recognition to both KCBY-TV and Round-Up yearbook. KCBY-TV received an NSPA Broadcast Pacemaker Award and two NSPA individual awards, and Round-Up yearbook placed ninth in the convention’s Best of Show contest.

DALLAS – After winning its first NSPA Broadcast Pacemaker in 2015, KCBY won its second on Saturday.

The last day of the 2017 JEA/NSPA Fall National High School Journalism Convention at the Hyatt Regency in Dallas proved to be a success with KCBY-TV taking home the Pacemaker along with multiple other awards.

The team owes its success to KCBY-TV adviser Irma Kennedy.

“She’s a second mom to us,” CHS senior Cole Calabros said. “Having her there to teach us how to be journalists has been a true blessing. We never expected in our lives to get this award, so it was huge for us. I’m overjoyed. Shocked. It was pure excitement.”

“This award is probably the best thing to ever happen to me. It shows me that all my hard work and all my team’s hard work in KCBY and everything that [Kennedy] has taught me is all for a reason,” Greene said. “Feeling that recognition is amazing and gives me more passion to keep going.”

CHS senior Rachel Behrndt received an honorable mention in the NSPA Broadcast News Story category. Her story covered the different opinions regarding a bathroom bill requiring people to use the restroom associated with the gender assigned to them at birth and how the bill impacts transgender people.

“I put a lot of work into that story, so to get recognition for it felt really nice,” Behrndt. “I love broadcast journalism. I love it more everyday that I do it, and I can’t wait to do it for the rest of my life.”

On top of this, Round-Up placed ninth in the convention’s Best of Show contest.

“This is the first time that we’ve ever placed, so I’m thrilled. I’m so proud of all the staff,” Round-Up adviser Sallyanne Harris said. “Our yearbook is pretty extraordinary and just keeps getting better and I’m so proud to be a part of it.”