Cowboys get defensive in bi-district victory 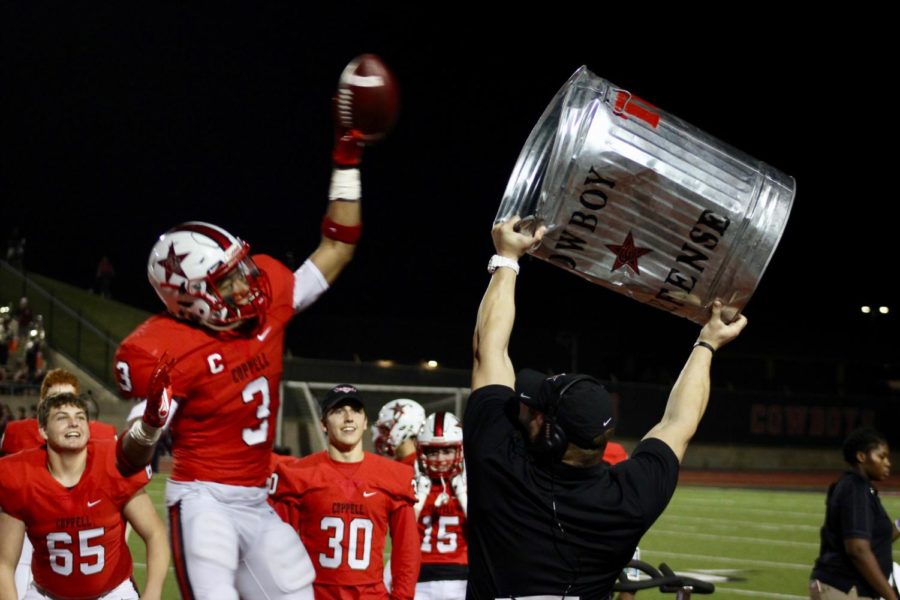 Coppell high school junior wide receiver Jonathan McGill celebrates a interception during the game against Rowlett Eagles at Buddy Echols field on Nov 17th. The Coppell Cowboys defeated the Rowlett Eagles 37-6, and will now advance to the second round of playoffs.

After the Coppell defense recovered its third fumble in Friday’s Class 6A Division I Region II bi-district playoff game against Rowlett, it was clear the Coppell football team would be advancing.

Students came out last night to witness the start of the Cowboys playoff journey. The student section was packed, as they celebrated the special powder game to represent their team. The Cowboys did exactly that, outperforming the Eagles to win 37-6.

Coppell will play Mesquite Horn (10-1) at 1 p.m. Friday at Allen Eagle Stadium in the area playoffs.

From the start, the Cowboys took charge and were able to come up with big plays against the Rowlett Eagles. It was a very one sided game last night as the Cowboys defense was able to completely shut down the Eagles high powered offense.

The offensive line for the Cowboys came up big, as the Eagles struggled to send pressure as McBride carved up the opposing secondary, with 151 yards on the night. The Cowboys also excelled on the ground as junior running back Ryan Hirt, was able to put a score to put the Cowboys up 24-0 and rip a couple runs.

In addition to the three forced fumbles, the Coppell defense recorded five sacks and blocked a field goal.

“The guys have gotten better each week, they played really hard tonight,” Coppell Coach Mike Dewitt said. “We are gonna hit the reset button, and going to work this week and get ready for the next opponent.”

During the second half, the Cowboys started to cool down, as they were looking to close the game leading 34-0 after the first half.

“One week at a time, got to do what we do every week, we have to get better and come out with the win,” Coppell junior safety Jonathan McGill said.