On the Spot: From students to speakers; “Pittsburg Six” take on Dallas convention as journalism celebrities 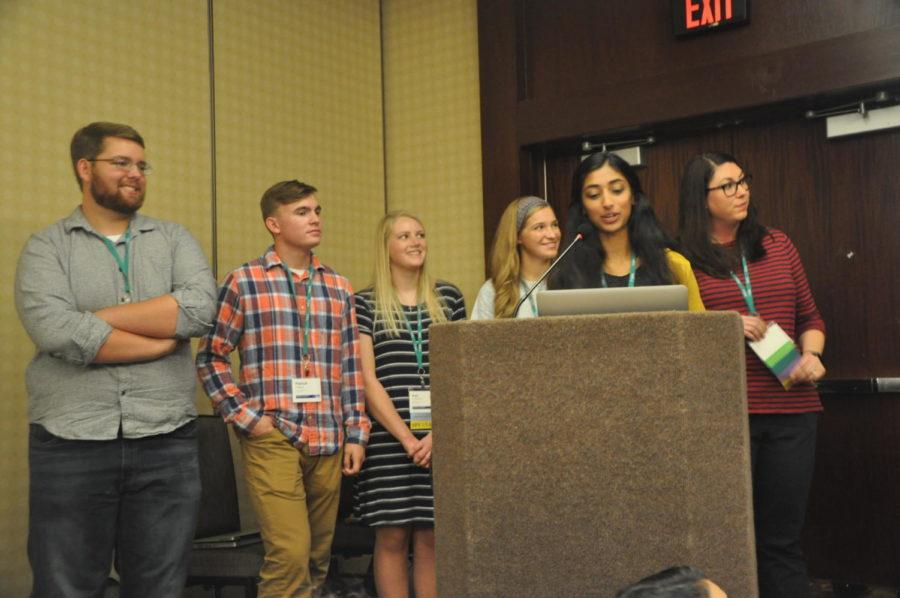 Pittsburg (Kan.) High School seniors Connor Balthazor, Patrick Sullivan, Kali Poenitske, Maddie Baden, Gina Mathew and and their adviser Emily Smith talk about the Booster Redux’s investigative adventure uncovering discrepancies in their principal’s resume leading to her resignation they had in March 2017. They led a session on Friday at the JEA/NSPA Fall High School Journalism Convention at the Hyatt Regency in Dallas, which is being attended by Sidekick newspaper, KCBY-TV and Round-Up yearbook staff members.

DALLAS – It all started with junior Maddie Baden noticing a couple discrepancies in her newly hired principal’s story.

It all ended with a trip to the White House correspondents dinner and the retirement of Destry Brown.

The whirlwind trip of the “Pittsburg Six,” of the Booster Redux student newspaper at Pittsburg (Kan.) High School (senior Gina Mathew, senior Kali Poenitske, senior Maddie Baden, Swarthmore freshman Trina Paul, senior Connor Balthazor and senior Patrick Sullivan) and their story that swept the nation and wiped out their district’s newest hire landed five of the students (Mathew, Poenitske, Baden, Balthazor and Sullivan) in a session speaking to fellow scholastic journalists about the trials and triumphs of investigative journalism at the  JEA/NSPA Fall National High School Convention at the Hyatt Regency on Friday.

“It’s very crazy to know that just last year we were here just observing and taking classes and now we’re kind of on the other side, and we’re still taking classes but we’re able to present and hopefully help other students who are curious about things,” Poenitske said.  “It’s kind of overwhelming, just to realize that we’ve come this far since last year.”

The student journalists talked about the experience of writing such a controversial article, the community drama that followed, and the global attention they received for their investigative work.

Later in the day at the convention, NPR Correspondent Wade Goodwyn talked about the importance of writing stories that make a difference.

“Frankly, there may be nothing more powerful than the exposition of wrongdoing,” Goodwyn said.

The Sidekick sophomore staff writer Anika Arutla thinks the Pittsburg students are the scholastic journalism emancipation of this idea.

The Pittsburg journalists encouraged others to go after the hard hitting stories, even if it means juggling the balance between being a student and a journalist.

“Understand that you can ask the tough questions not be seen as a student necessarily, and in the moment, in that role, you are acting as a journalist who is trying to find answers,” Mathew said. “You can’t be afraid of talking to your superiors.”