On the Spot: Journalists looking to go big at national journalism convention (with video) 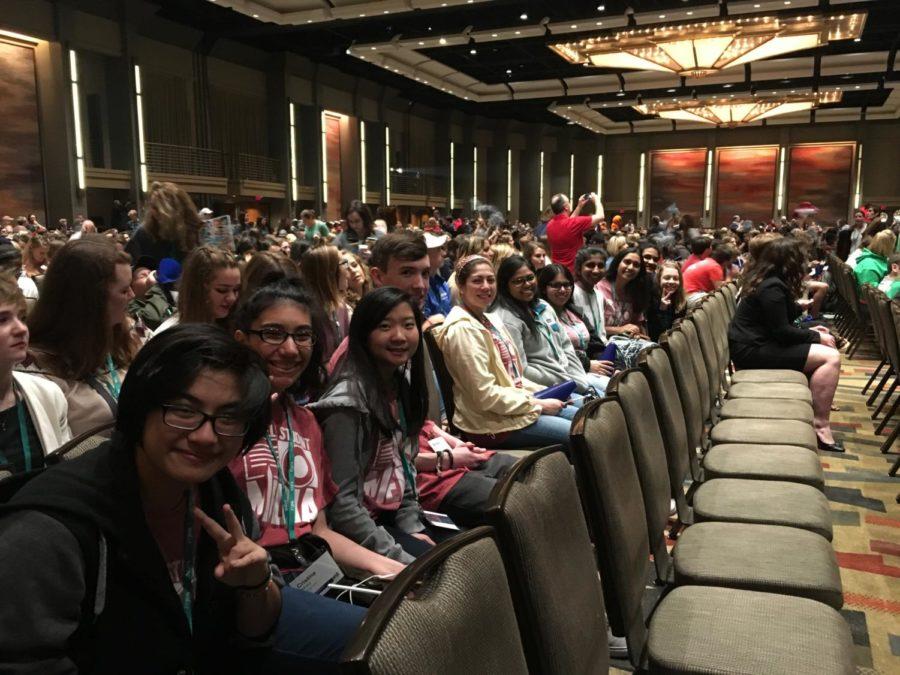 The Sidekick staff members attend the 2017 JEA/NSPA Fall National High School Journalism Convention’s opening ceremony at the Hyatt Regency Dallas on Nov. 16. Among nearly 5,000 other high school journalists, students are learning about how to become better journalists through various sessions led by professionals and educators in various fields at the convention.

For the 29 Coppell Student Media members in attendance, this scene was the introduction to a weekend of learning about becoming better journalists

“[Attending the convention] is just so exciting to me because I love being reminded by other people’s passion how great my passion is and it’s just an amazing feeling,” The Sidekick Editor-in-Chief Amelia Vanyo said.

Staff members had the chance to learn tips for storytelling and page designing from professionals in the field, including keynote speaker Erin Trieb, a freelance photojournalist based in Istanbul, Turkey.

During the convention’s opening ceremony, preceded by several performances from local high school drill teams and dance groups, Trieb spoke to attendees about life as a photojournalist. She described the sacrifices she has had to make in order to tell a story through photography, sharing her experiences of putting herself at risk in several war-torn countries.

During the day, staff members attended pre-convention workshops focused on their area of journalism. Some sat in listening to speakers about how to improve page design while others ventured into downtown Dallas to write a story on-the-go.

Apart from the knowledge gained from breakout sessions led by professionals and educators in various fields of journalism, Coppell Student Media is entered in several individual and group competition, highlighted by KCBY-TV being a 2017 NSPA Broadcast Pacemaker finalist. The NSPA Awards ceremony will be held Saturday.