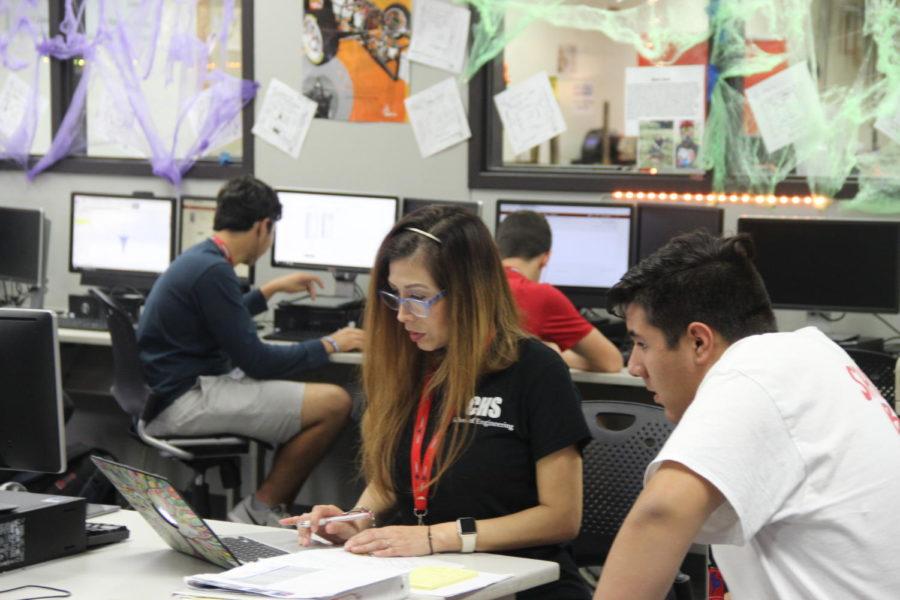 Coppell High School— Pilar Castro-Zena helps a student upload a project to Google Drive during sixth period on Oct. 20. She aims to help students improve with various computer programs designed to help further their knowledge in the field.

Hailing from Peru, Pilar Castro-Zena joined the Coppell High School staff this school year, sporting over 20 combined years of research and teaching experience. She is teaching several STEM (Science, Technology, Engineering & Math) classes this year, with ambitious plans for the future of the program.

“Before I became an educator, I used to be a scientist,” Castro-Zena said. “I have about 12 years of experience doing research, publishing and working with molecules. After that, I started teaching science courses at UNT.”

“She was actually a working scientist, which is really cool,” CHS STEM coordinator Mike Yakubovsky said. “It brings a different dynamic because she has a science background, I have a business background, and [CHS STEM teacher Grant Garner] has an engineering background. That gives us a wide range of experience in the program and I love that.”

Castro-Zena notes two people in particular she has looked up to for motivation and inspiration during her life.

“I had a chemistry professor in Peru,” Castro-Zena said. “He really was central in me to go into the science field; he was very strong in the subject, and he helped me prepare for exams. And then, in the U.S., there’s somebody I admire a lot: Professor Douglas Ruth. He’s a researcher at UNT and he works with molecules, and we worked together. We were a perfect fit.”

After years of research and study, Castro-Zena went along to teach in STEM-related fields.

Finally, she joined Coppell ISD in 2016. She worked at Wilson Elementary last school year, where she started the Spanish version of the Argument-Driven Inquiry (ADI) science program, in which students develop their own ways to solve problems and receive critique from their peers.

“All along, I’ve been developing science curriculum for both [Coppell and Irving] districts,” Castro-Zena said. “I have always been very close to science, and in the summers I would work STEM camp, with coding or robotics, that kind of thing.”

But according to Castro-Zena, her love has always been high school.

“When I left UNT I wanted to teach high school, but there was always a need for elementary [teachers] so I stayed pretty much for 10 years,” Castro-Zena said. “When I had a chance to do STEM in high school, it was the right fit for me, and I went for it.”

Though Castro-Zena noted the difficulties in adapting to a school as large as CHS – “It is difficult to make a human connection with the entire staff,” she said – she takes pride in the academics.

“Coppell, in general, has very strong academics, experienced teachers and educators,” Castro-Zena said. “The students have an excellent work ethic; in Coppell, there is a general population where the kids are more supported by the parents, and that really reflects itself in the work they put forth academically. I can push them far and set high standards because they can reach them.”

Castro-Zena plans to further aid students in completing SolidWorks and LabVIEW courses, which add the technology aspect to STEM, as well as getting certified in OSHA, a program which aims to prevent injuries, illnesses and death in the work field.

“I constantly graph my classes’ progress so kids know where they are and how their class is moving,” Castro-Zena said. “I update those charts daily; it’s a lot of work, but I can pinpoint who is falling behind and help them individually. I will continue to do that because it has been working positively.”

The impact of Castro-Zena on her students has been extremely evident.

“She invests a lot of love in her students and she approaches learning in a way that’s a lot more personal,” CHS sophomore Suprita Ashok said. “She brings a woman’s perspective into a very male-heavy field. She represents a minority, especially since she’s also a woman of color, and I like having that perspective. Her strongest quality is her care for each of her students — you don’t really get to see that in high school teachers, especially when they have so many kids.”

“She brings a sense of diversity, that new background and new experience from another country,” CHS sophomore Olivier Balazy said. “She also has very high standards for students, she’s quite enthusiastic.”

Yakubovsky agrees, and notes the effect it has on students.

“Just like with her professional background, [her ethnic background] brings a different perspective, so that we’ve got males and females, Hispanics and non-Hispanics, which is always awesome,” Yakubovsky said.  “It also helps with the students. She’s a different person to connect with and a different viewpoint as well for them.”